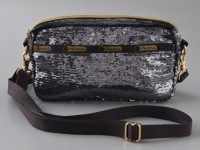 Did anyone watch Sports Night back in the early 2000s? It was the show that Aaron Sorkin did before The West Wing, and it was an excellent, if short-lived, peek behind the scenes of a SportsCenter-type broadcast. In one episode, the taken-for-granted wardrobe girl went off on one of the show’s hosts about how her job was important because if dressing was left up to him, he’d never figure out which undertones went with what colors and he’d end up looking like crap.

Well, whoever designed the LeSportsac Blue Steel Small Crossbody Bag probably should have borrowed my DVDs of the show and listened to her rant, because this bag is kind of adorable…except for the out-of-nowhere gold hardware and trim. Although if the bag’s name is a Zoolander reference, I’m willing to forgive the designers. 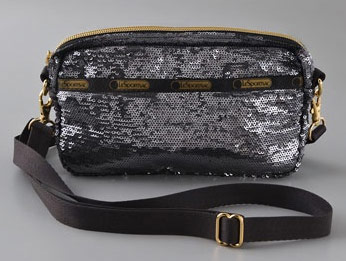 A sparkly little nylon crossbody to brighten up your outfit when you go to the store or out for lunch isn’t a bad thing to have around, particularly if your personal style tends toward the sporty, but gold hardware doesn’t work with this bag’s color by any stretch of the imagination. The cool shade of blue-grey is begging for silver trim, and in general, silver looks better with cool tones while gold should be paired with warm. I suspect that the shade contrast was intentional here, but it just doesn’t work. Buy through ShopBop for $48.

Amanda, A+ and cookies for the Sports Night reference!

YAY! Someone else knows Sports Night!

I’ve seen this bag in person and the sequins are sewn in really well. I would have definitely picked this bag up if not for the awful gold logo contrast 🙁

I’m not a fan of LeSportsac, but this is a bit different from their other bags. It’s nice, but get rid of that tacky logo strip!

got it,thanks for your good site http://www.ugglvgucci.com