Juicy Couture has the same problem with their handbags that I had with my fingernails as a kid: they just can’t leave well-enough alone. I’d paint my fingernails and then immediately notice some infinitesimal flaw and pick at the or try to fix it until it was several orders of magnitude worse than it ever was to begin with. It took me years to learn my lesson and keep my fingers to myself, and hopefully Juicy will figure all of this out one day as well. 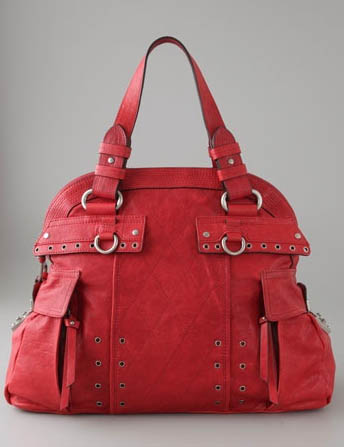 Which is not to say that I don’t like the Juicy Couture Queens Garden Tote – I do, or at least I do relative to a lot of other bags that they make. It’s got a shape to it that reminds me a lot of the ever-popular Yves Saint Laurent Muse bags, and it looks like it would be a functional, but it also doesn’t look particularly well-edited. It’s a brightly colored, quilted, riveted bag that has four exterior flap pockets, useless hardware rings, and zippers with tassel pulls. In the words of Tim Gunn – that’s a lot of look. The bag manages to pull off all of those things decently well, but I think it would have looked better, or at least more high-end, if one or two of those things had been modified or discarded. Buy through ShopBop for $448.