How many times have the people in the fashion Ivory Tower tried to make Halston happen again? A lot? This seems like at least the third time in recent memory. If I remember correctly, the Weinsteins own it now, and far be it from them to not try to cash in on something as much as humanly possible. It just wouldn’t be like them.

So now we have another Halston reboot, this time with Sarah Jessica Parker as the recently announced creative director, and they’re turning out some fairly affordable pieces for once. Of the available handbag choices, the Halston Heritage Sequin Folded Clutch reminded me the most of the halcyon days of Studio 54 that first made the brand iconic. 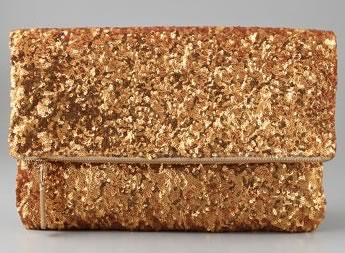 Naturally, you can’t have a disco-throwback without a disco ball, and I think that this glittery clutch approximates that nicely. Part of Halston’s legend is the brand’s easy but modernist lines, so I’m glad that the new designers didn’t make the shape any more complicated than it had to be.

As much as I like sparkly things, though, I’m just not getting that certain magic from this particular bag. Sure, it’s fine for what it is and not terribly expensive, but it bears the same burden under which all the Halston failures of the past have suffered. Because of the iconic name, I want something more and something better, and a glittery little evening bag that could have been made by anyone just doesn’t capture my imagination. Buy through ShopBop for $195.

It has somehow lost its ‘groove”! I don’t think I really want sequins to fold over. The logo canvas lining is not really special enough for an evening bag. I much prefer the Halston heritage evening frame sequined clutch which has a lovely silver clasp, ocean blue sequins and a defined box shape that gives it power.

I must admit Iâ€™m a great fan of halston heritage, very cool.