Saint Laurent does its own version of the Hermes Birkin 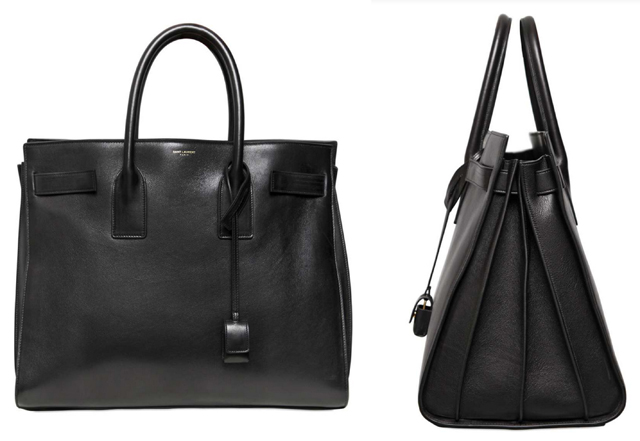 Late last week, I received a text from a friend, asking if I had seen “the new Saint Laurent Birkin.” This friend and I share (negative) feelings about new Saint Laurent creative director Hedi Slimane (and Cathy Horyn agrees with us, so I feel pretty good about it), so I knew whatever was waiting at the end of the link he included in the text would be worth at least a smug snicker, even if it weren’t as blatant a rip-off as he’d suggested. As it turns out, though, the Saint Laurent Sac de Jour Tote is actually that blatant a rip-off.

It hasn’t been a particularly good week for Slimane. His latest collection, a grunge-y Hot Topic fever dream inspired by the baser sartorial instincts of noted crazy person Courtney Love, was roundly panned by virtually every fashion critic whose publication would allow him or her to say starkly negative things about it. It was bad; far worse than his previous collection, which received little critical excitement but still looked like something that might conceivably be manufactured by Saint Laurent. (Don’t include the Yves, lest you be struck down by YSL PR.) Even I thought it was bad, and I love grunge. I own multiple pairs of combat boots. Still, nothing to see there.

At this stage in the game, Slimane’s additions to the Saint Laurent handbag line have been a relative bright spot. The designs are generally snooze-worthy, but just by virtue of being a brand with a buzz-worthy name behind it, they were bound to sell until the buzz wore off. By then, I had hoped that Slimane would improve at the whole handbag thing. This bag, though, shows little promise.

It feels like belaboring the point even to bother explaining all the details ripped straight from the iconic Hermes Birkin; you can also see the belted closure, gusset style, clochette (holding the key for what lock, exactly?) and proportion for yourselves. What’s perhaps more important is what’s been divested from the classic design: any sense of luxury or style. It’s not a particular stretch to say the same of much of Slimane’s Saint Laurent ready-to-wear.

If I haven’t been able to dissuade you, feel free to pick up this bag for $2,950 via Luisa Via Roma.