Love It or Leave It: Non-Neutral Metallics 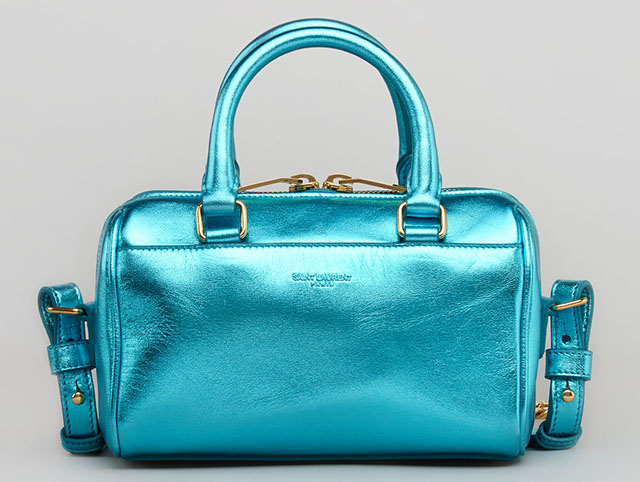 Despite the fact that Saint Laurent bags confuse me at times, I’m actually a huge fan of the smaller versions of the brand’s duffel bags; they’re adorable, and compared to the slightly larger options, the price point is pretty good. I’d carry one in a heartbeat. Or, rather, I’d carry one in almost any non-metallic leather. When it comes to the Saint Laurent Metallic Toy Duffel, I’m not quite convinced.

In general, I don’t shy away from traditional metallics. I probably have more silver shoes in my closet than I have black and tan combined, and one of my favorite bags I’ve ever owned was a metallic pewter Balenciaga from 2005. In fact, Balenciaga did a lot of metallics, both neutral and not, during that era, and they’re largely quite sought-after to this day. When I laid eyes on this version of tiniest Saint Laurent duffel, I was immediately transported back to that era. The neutral metallics, like gold and silver, did that in a good way. The colorful metallics, on the other hand, were not quite as positive.

It’s extremely difficult to pull off a finish like this in blue or pink without it looking cheap, and in fact, part of the point of the bag is to reference the electro-punk look that is one of Hedi Slimane’s influences. In that regard, the bag succeeds in spades, but I’m not sure that the final product looks particularly expensive. Whether or not it needs to is up to consumers, I suppose. Buy through Neiman Marcus for $1,390.

you should put this bag in your last “17 Scary Bags Perfect for Halloween” post. ROFL >:3

Usually I’m a fan of bright colors, but I think the metallic and the brightness is just a little much.

I don’t really like metallic bags in general, but I would love this bag in that color if it were non-metallic.

Wow, Hedi, you actually did it. You impressed me. I’m going against my own believes here but, I’m finding myself interested in this bag.I like it.

LOL thought it was another Prorsum

I just can’t help feeling like I could find something like this in the kid’s accessories department at Target for $10 or something… I do like the shape though!