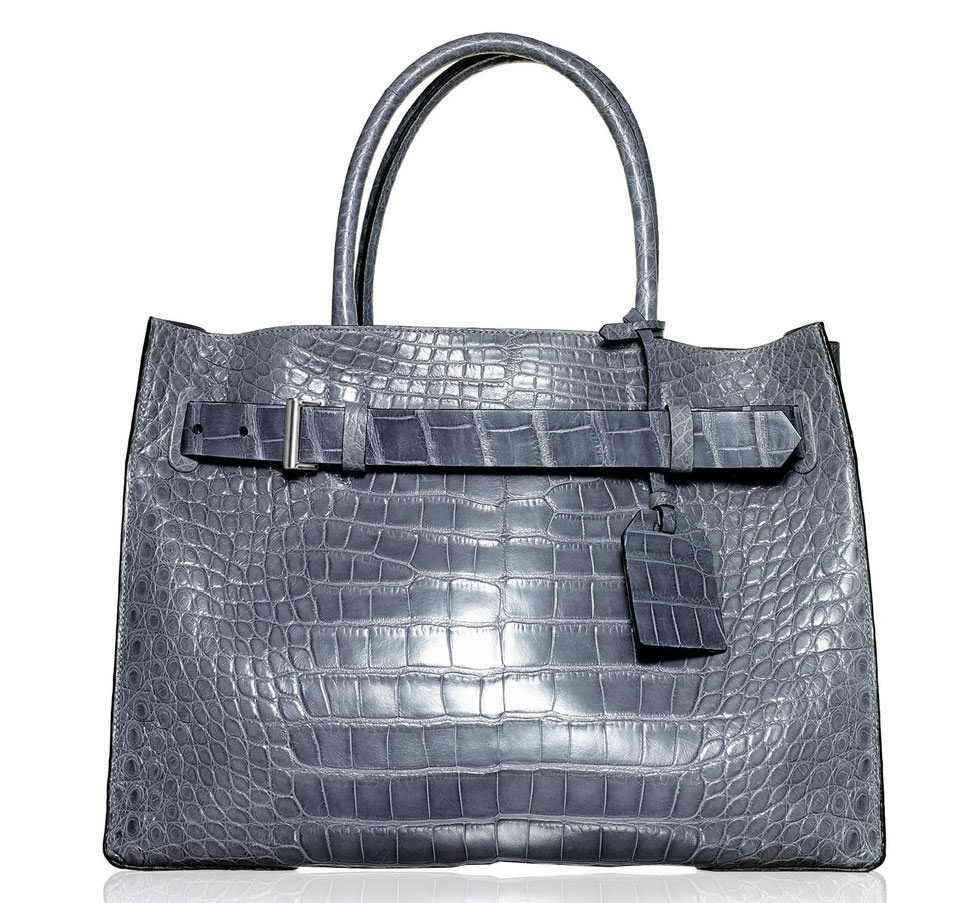 Late last week, Women’s Wear Daily reported that Reed Krakoff would suspend operations while in pursuit of new investment to keep the line afloat. While the news itself is a surprise, it’s not shocking that something was up at Krakoff’s company; it’s the third young, well-known brand in the past several months to either partially or completely shut down. There’s a reason for that: shoppers just aren’t buying ready-made “lifestyle brand” marketing.

With this news, Krakoff joins the somewhat inauspicious ranks of C. Wonder and Kate Spade Saturday; C.Wonder shut down its operations completely in February, liquidating its inventory and closing all its stores. Some thought the brand might survive as a wholesale business, but owner Chris Burch chose to try his luck elsewhere. Kate Spade Saturday also closed its stores, but for now, it plans to have a home within the existing Kate Spade website and retail stores.

With both of those brands, and now with Krakoff, at least part of the problem seems clear: Fashion customers are too savvy to buy into a ready-made “lifestyle brand” story when the brand has not already demonstrated its value and proficiency in some way first. Going full speed ahead into accessories, shoes, jewelry, frangrance, ready-to-wear and handbags (and in C. Wonder’s case, home decor) is too much, all at once, and all the unpleasant seams of fashion marketing show. The customer recognizes that she is being sold something and simply doesn’t know why she should care, and brands are doing a bad job of proving their case.

On the opposite end of the spectrum, we have young success stories like Mansur Gavriel, Edie Parker and Charlotte Olympia. All three started out with a very specific, narrow line of products (minimalist leather bags in neutral colors, bright acrylic clutches and whimsical footwear, respectively), and once customers responded positively, then each brand started to extend its reach in careful, well-planned, relatively conservative ways. So far, each brand has done a strong job of retaining its first fans while building its customer base and business.

The approaches taken by each of these sets of brands are at opposite extremes of the spectrum, and at this point, the savvier of the two is clear. Fashion customers won’t just buy anything put in front of them with a slick logo and a promise of luxury, and even in the case of Reed Krakoff, where many of the products were top-notch and the designer was an indsutry vet, a slower burn likely would have yielded a healthier business, in the long term. You have to let the customers come to you.

There’s a bit of hope for Reed, though. WWD reports that there’s still product in the pipelines and although the brand is closing its Madison Avenue store in the next few weeks, it will continue to operate its Soho store, Woodbury Commons outlet and its website for as long as possible–the hope is that the brand will be able to find new investment quickly and then pivot to a more “accessible luxury” model. It’s a market that Krakoff knows well, as the longtime creative director of Coach, and one that we hope he’ll be returning to with new funding soon.

When and if Krakoff resurrects itself as a brand, though, we hope it will be with a more measured approach. Customers have always been excited about his bags, if our comments section is any indication–we hope he will start there.

Awww, that’s a shame. I have 2 RKs – not such a popular brand in Europe – but great for good, understated quality.

Great article – very interesting!
I always liked many of his bags, but never ‘pulled the plug’ on one. It did feel a bit expensive for a brand (albeit not designer) that was so new.

I think if he came down a bit on his prices he would do better. His designs, both at Coach and on his own, were sleek and sophisticated. I feel that Coach customers who don’t like Vever’s direction would buy Krakoff if his prices weren’t so steep. I know I would!

I agree and it seems what they’re inclined to do now, if it’s not too late. I think the perception of, I can get X amount of Coach bags for that price sticks out in a lot of people’s minds. I feel the quality of RK, especially the RK40, is well-worth the cost and surpasses many similarly priced premier designer bags.

Yeah, going in to a market at near-premium prices with little brand history is…a tough proposition. If you’re going to do that, you have to start small and sustainable while you win customers, and Krakoff went for the full-court press, so to speak. That’s an exceptionally expensive way to go, as a business, and it exposes a company to a lot of risk.

Thanks Amanda for this article very very interesting. The news regarding Kate Spade shocked me a bit (I like her products a lot! Although I never understood why they did not send to Europe!!!). I hope RK and KS could be able to re-start. 🙂 p.s.: I do not believe in a middle market positioning as I already said, there is no place in this market for the “middle place” right now, you have to choose “low cost” or “luxury” in order to survive.:)

Amanda, I appreciate your very well thought-out article. As others have posted, I too love Reed’s designs but have never bought any of his handbags because of the price

I really hope he’ll be back at a more realistic price point, perhaps the one that Alexander Wang and 3.1 Phillip Lim have found so much success in. “Premium contemporary,” if you will.

It seems the bags sell well though, the limited edition felt bags are all sold, they have lots of sold out bags on their site.

I think Reed’s always been able to design bags that will sell–I like a lot of the current season stuff, and reaction from our commenters on his collections has generally been positive. I think the company over-extended itself, though; launching fragrance, opening multiple NYC boutiques, doing a full line of ready-to-wear and producing many different handbags is a financial burden for a new company, and handbag sales, even if they were good, were probably not enough to cover all the expenditures on the other stuff that wasn’t able to support itself yet.

I always thought that Reed Krakoff started off too fast and should have focused on his handbags. I did remember commenting on a Reed Krakoff post here that some of this bags looked too much like the Coach brand that he left which left me feeling that his bags were overpriced. Obviously others thought so as well. This, for me, is no surprise.

I never got the whole Kate Spade Saturday concept as it didn’t feel any different than Kate Spade. As far as C. Wonder goes, I also found it to be overpriced and too much like Tory Burch which, of course, is no surprise either. Karma.

the bags are nice, but nice is not special enough esp. for that price point no?
maybe there is no such thing as an artificial lifestyle.
an authentic organic lifestyle takes time to build.

Very interesting article, thanks! They need to re-think their business model and retrench — hopefully that will enable them to stay afloat.

I haven’t stepped foot in a Coach store for years. I was a kid when they closed their U.S. factories and off-shored the manufacturing to Asia. Friends of the family lost their jobs through no fault of their own and it was a devastating experience. Apologies to Purseblog Coach fans, but I have no respect for the brand. I’d rather spend a little more for European brands still made in Europe by people earning a decent wage. Or buy vintage.

This article is about the brand Reed Krakoff, not about Coach. Reed has not been with Coach since June 2014.
As for manufacturering in the US and Europe, keep in mind that manufacturing leather goods is an art and a specialized craft. There are simply not enough leather artisans and craftsmen in these countries as there are in Asia to maintain a consistent level of quality at this volume. In fact, LV constructs most of their pieces in Asian countries, and then they are “finished” in Europe so they can be marked as being made there.

There are still well made, designer brands made right here in the USA. GigNew York is my fav. Most of their bags are leather lined!

Thanks for the heads up. I’ll have to look at GigNew York and Lotuff.

I am completely with you on Coach. Their move from quality, U.S. made leather goods to overexposed, canvas, C covered junk left me cold. Now, their new items have the old price tags but are still marginal. The leather is mid range and the styles are yawns. I would love a great American high fashion, luxury designer. But we seem stuck in Michael Kors / Coach Hell and that will keep me buying European brands. My dollars will go to whomever combines quality and style.

That all being said. I’m sorry for Mr. Krakoff. I haven’t purchased any of his items but they were on my “to look at” list

I have a handbag line that is US made that I feel is good quality with a unique design filling the void you are talking about in your comment. The line has an interchangeable flap that works with all the bags in the collection and can be purchased seperately and collected . The insta is Monique.rene and the site is monique Rene . Com ( no spaces ) . I really tried to use a business model to capture versatility and style within the flaps to show your personal style 🙂

I agree with Sera. Support the guy who originally designed the bags not the guys who ripped it off. I gotta hand it to Lotuff for better marketing. It makes me sick reading the history section on their website. Frank Clegg is an honorable man for not leveling with these thieves.

Or your could support Frank Clegg, and not the guys who lifted his designs after they broke up…

Great collection and you can find more stylish bag is here-