Is this Marc Jacobs Crossbody a Mini Parachute?

It could be. And while it’s a cute bag, I have a tiny problem with it. The Marc Jacobs Parachute Cammie Crossbody Bag looks, to me, like it was made out of greenish golden tin foil. Someone just bunched that stuff up and stuck it under the zipper.

But there’s a general problem with this. First of all, it’s called the Parachute, so the designer must know that it looks like it was made out of flimsy parachute material (which pretty much looks like tin foil to my inexperienced eye – when it comes to adventurous air travel). The other problem is that I’m disappointed with the stock photo. 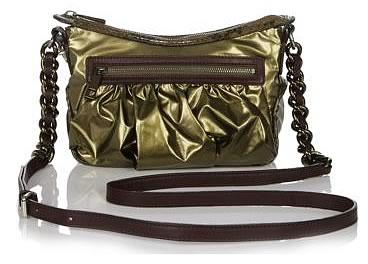 Because the bag is plopped on the set counter, we can’t see what it looks like when it’s full and being worn on the body. My guess it that once items are put inside and you carry it, it’ll look much, much better – not bunchy at all. If anyone has seen the bag in person, please enlighten me. For now, I’m giving Marc Jacobs the benefit of the doubt. Buy through Bloomingdale’s for $495.

Like It or Not, Mini and Super-Mini Bags Are Here to StayPrada Reissues Its Iconic Nylon Mini BagThe Best Metallic Mini Bags for Under $100Deal of the Day: the DeMellier Mini Oslo Bag