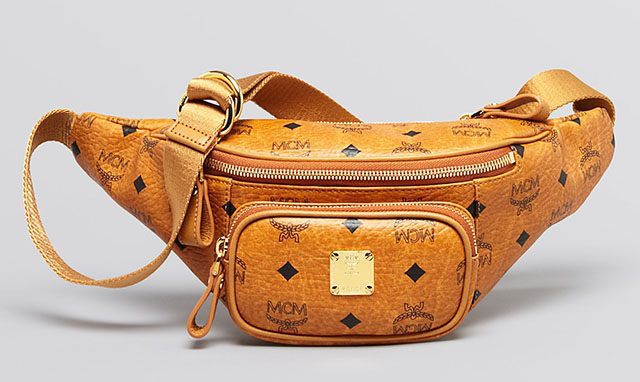 Before I start, I should mention that MCM has a particular knack for convincing me to like things I normally hate. For instance, logo bags – I haven’t bought a logo bag since I was in college and have no plans to do so now, but MCM’s logo pieces have such unpretentious swagger to them that I’d totally go down that road for one of them. MCM also made me lust for a backpack long before the trend took off, for reasons I still can’t entirely explain. It looks like the brand’s powers of persuasion have hit a wall with the MCM Waist Bag.

Isn’t it funny how many euphemisms fashion brands will come up with for “fanny pack?” In women’s fashion, the go-to term is “belt bag,” and apparently, for the dudes, “waist bag” is the term of discretion. We all know what it is we’re looking at here, though, and this bag isn’t styled to be anything more ambitious than what it is: a fanny pack. The shape and details are as much of a literal 80s throwback as you’ll ever find – if you showed me a photo of my dad wearing this bag around his midsection while trotting a four-year-old me through Disney World, I wouldn’t question it for a second.

There’s a certain type of charm in that kind of fearless embrace of something so often reviled, and that charm will surely be enough to sell a couple of these bags to the irony-lovers of the world. Beyond that, though, I can imagine many average dudes ponying up several hundred bucks for this throwback. If you’re part of that rather slim crowd, pick one up for $425 via Bloomingdale’s.