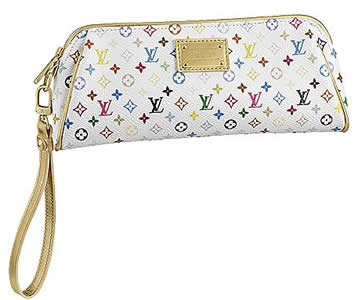 The allure and tradition of Louis Vuitton has not faded, but with the counterfeit market the curbside appeal of the Monogram canvas has wavered. The major problem for a brand like Louis Vuitton is the blatant knock-offs that are sold for a mere Andrew Jackson, $20, all over the world. But there are positive steps forward for the company, like the recent case where eBay had to pay LVMH $61 million in damages. As the crack down on counterfeit goods tightens, we can slowly start to love the monogram canvas from brands like Louis Vuitton, which is one of the most replicated patterns in the world.

When I go for a LV monogram, I try to find something that adds a tad different touch so as not to be the #1 copied pattern from the company (like the monogram Speedy which is counterfeited incessantly). Between my clutch obsession and the colorful mini monogram pattern, the Louis Vuitton Mini Monogram Multicolore Kate Clutch breaks out of the easily copied mold and works perfectly for my summer nights out. The long, east/west clutch sports the Mini Monogram Multicolore canvas, one of my favorites from the house because it ties together the LV logo with pizazz. The clutch is trimmed with metallic calf leather and accented with shiny golden brass hardware. There is a flat golden leather wristlet with a clasp attachment, which makes the wristlet removable if you would just like the clutch handheld. But I find the wrist strap a selling point, being able to offer a little better grip and really offer you both hands on the dance floor, when getting drinks, or just walking around. The inside is lined with red microfiber and there is an interior patch pocket. The more lush lining is precisely what I want in all of my LV bags, and I adore that this chic little clutch has this. Measurements are 9.4″x 3.7″x 1″. Now, this may be a selling point (or buzz kill for some), the clutch is named after supermodel Kate Moss. She is, after all, one of the most recognizable faces today. Buy through eLuxury for $560.

If my younger daughter were about 10 years younger,this clutch would be a nice pencil case for her. It is so youngish and has a perfect leather strap too. Just a thought!

Never been a fan of any of LV monogram items, and multicolore… 😕

I got one too 😉 Looks v. cute for little summer stroll in the park (or just running quick errands in the n.hood)

Are there any tell tail signs of how to spot a fake?

Not a big LV fan, but have the Kate and use inside my larger handbags–love it!!!

A pencil case for 560 dollars? Really? I hate to see how much her backpack would be.

I bought mine last week and the matching zippy coin purse/card holder to go in it. What leopard print lining? haha…joke, right?

Anyway, I plan on wearing year-round – haven’t you heard? You can wear white now at any time of the year – yipee!

I am taking mine to Orlando for Labor Day

THE KATE DISCONTINUE ALREADY?? WHERE I CAN GET IT….????