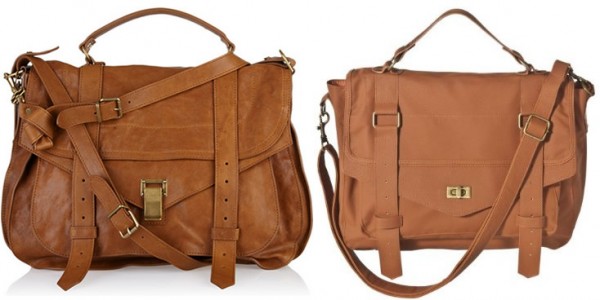 One of the main things I had to get used to after moving to NYC was missing out on my bi-weekly Target shopping trips (and Chick-fil-A, but that is an entirely different story). I grew accustomed to shopping for all of my household needs and then browsing the designer collaborations Target had to offer on every visit. After all, Target has collaborated with many huge designer brands for their Target on the Go! International line. One of these designers is Proenza Schouler, which released a collection with Target in the mid-2000’s. The collection was so sought after that Target just reissued several of the dresses a couple of weeks ago alongside other popular past designer collaborations.

That is why seeing this Mossimo Messenger in Cognac on the Target website is particularly interesting since the bag clearly looks similar to the famed Proenza Schouler PS1. While we know Target has many bags that are modeled after well-known designer bags, this bag hits a little too close to home because of the business relationship Proenza has with Target.

Blog debate: Did Target take a step too far by carrying this PS1 look-a-like?

Megs, I agree – Target crossed the line with this messenger bag! Also, I eat Chick Fil-a at least twice a week so I feel your pain!

I was teasing Megs about Chickfila while she wrote this earlier. I have nuggets in my tummy right now. I’m going to miss it so much when I move.

I heard there is a Chickfila in NYU, and its open to the public.

Amanda, when are you moving?!

I actually saw that at Target the other day. I made a bee-line for it because it looked exactly like the PS1 and I thought, “Holy crap what a knock off!”

I suppose people who know better will automatically realize it’s a cheap knock off and those who don’t know any better don’t know what they’re missing anyway.

I’ll be honest to say I don’t know how business relationships work but even though Proenza has a “history” with Target, Mossimo is THE Target brand, right? So is it Target’s fault or Mossimo? Or both? I don’t know.

this one is worse…

Proenza should just leave Target alone. The masses deserve good alternatives to iconic pieces such as PS1. It is not a fake, but an inspired version.

It doesn’t bother me as the Proenza is just basically a redo of an old school bag/briefcase. Aside from the style of the clasp it is almost identical to my dad’s (who is 70) 50 year old college bag that he still carries today.

The Target version just looks cheap. I can only imagine what it looks like in person.

U took the words right out of my mouth.

I must say I agree that there will always be inspired by pieces or even knockoffs at places like Target for much less money, and rightfully so, cause not everyone is crazy enough or can afford to spend $ 2,000 on a handbag. I wish everyone could afford the real deal, but for many people this will be a dream. I can only dream about it, too â€“ fair enough, I won’t be buying any knock-off, that just would not feel right.

They all copy each other at some level. And the PS1 is not anything really new. I agree with Teresa above. I’m in my 50s and have seen the same ideas rehashed over and over again and throughout the decades. Plus, there are plenty of designers and design companies that copy and have copied ideas from kids off the street and those kids haven’t received a dime for their ideas. So, as far as I’m concerned a lot of high-priced designer products are knock offs of lower priced items.

I think they did. I don’t like the Target knockoffs, and I think it’s insulting and not creative to copy a designer’s already-existing bag.