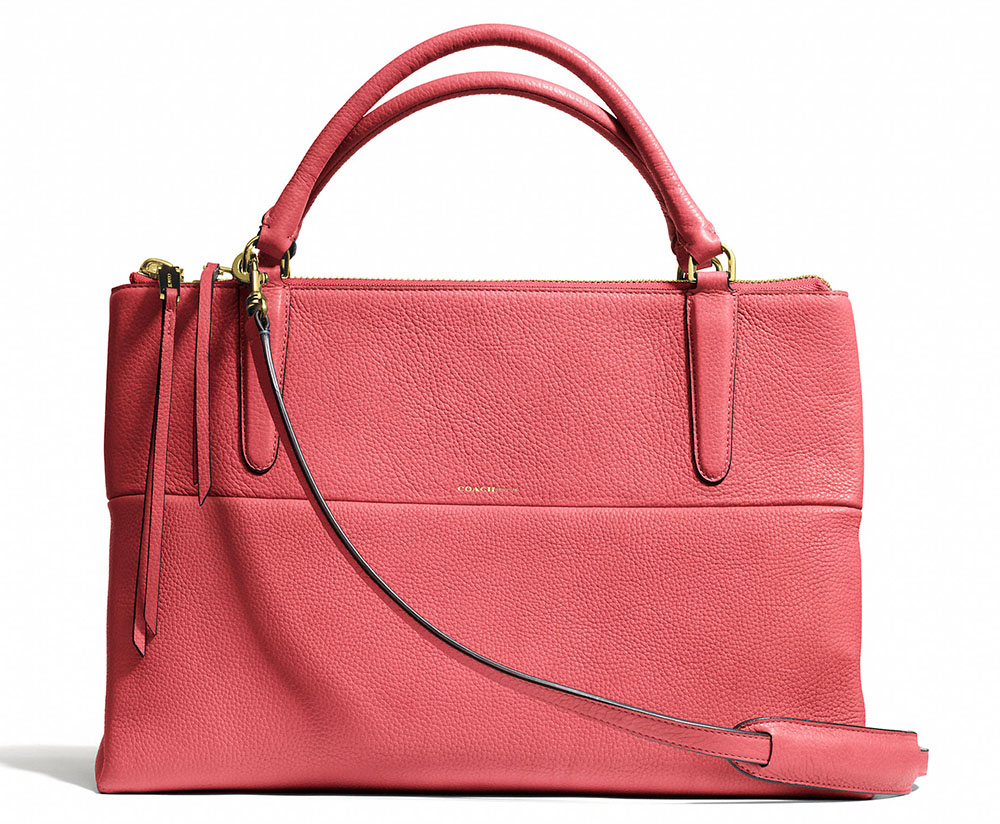 It’s no secret that Coach is in flux. After the departure of longtime creative head Reed Krakoff, the company has decided to pivot its public image in a more fashion-savvy direction. First, that meant bringing on handbag savant Stuart Vevers, late of Loewe and Mulberry, and allowing him to set a tone for the brand’s aesthetic future. The next step, it appears, is shifting its retail strategy – there are going to be far fewer Coach stores in the near future, according to Women’s Wear Daily.

Last week, Coach announced that it would close 70 under-performing North American stores in the first half of 2015, which is likely wise, considering the more fashionable and expensive direction that Vevers intends to take the brand. Just from my own observation while visiting my parents in Georgia, Coach has many stores in suburban malls with few (if any) other luxury retailers and little in the way of a luxury customer base, and while it may have long been possible to sell $300 handbags in those markets, Coach’s desire to raise its prices to line up with a more fashion-focused product line will probably make sustaining business at those locations untenable.

In addition to the closures, remaining Coach boutiques will get a new concept that’s more in line with the brand’s new aesthetic direction, starting with flagships in major markets like New York City.

For bargain-savvy shoppers, both Coach’s promotional schedule and its outlet strategy are shifting. The brand indicates that it will move to a biannual sale schedule, which is in line with other luxury brands and retailers. In the past, Coach’s sales and promotions had been more diffuse, and customers who are used to waiting for their discount cards to come in the mail for multiple mid-season events per year will likely be disappointed in the tightening of the markdown reins.

At the outlets, product assortment will be the biggest shift. Only two locations will close, and in the remaining stores, the now-ubiquitous logo bags will make way for a wider variety of leather options. We’ve heard some irritation from our Forum members about the lack of leather at the Coach outlets, so perhaps this news will create some satisfied customers. WWD didn’t make it clear whether the logo options would be scuttled from the outlets altogether or just drastically reduced, so we’ll have to wait and see.

All of these changes come on the tail of news about Coach’s sinking profits, and 2015 is expected to be a rough year while the brand attempts to right itself. Do you have high hopes for Coach?

This makes me very happy!!! I had strayed away from Coach because of the market saturation of the logo purses….which I can’t stand! I much prefer leather unless I’m buying a Louis. It had been years since I had purchased a Coach bag until I found a gorgeous Madison Hair Calf and Ostrich satchel through the online outlet sales. It will be nice to see the company go back to its roots an put out more leather/quality bags instead if the cheap/ trendy logo signature line.

I completely agree. I do not currently own a coach purse because of the saturation of the logo on every bag. This isn’t the 00s anymore and no fashionista want to be a walking billboard.

Yes, I hope they can turn it around. I do not purchase Coach at this point in my life but I certainly did was I was younger. I think Coach is a wonderful mid-priced option. Not everyone can afford premiere designer goods and Coach is a well made reasonably priced alternative.

I’ve only recently (in the last year) had the money to indulge myself with multiple handbags, and Coach is the only thing I’ve ever had. My first wallet and handbag were gifts from my mother. I’m sentimental when it comes to the brand. Everything I have is leather, no logos. Weeding those bags out is a good move. This latest wave that hit the website a couple of days ago had me running to the local Coach store. What I see right now is…me, and what could still interest me in the future–gunmetal hardware that I’d love to have, but… I feel an urgency to buy because after looking at the upcoming Fall collection I’m just not sure. I like the overall theme, but the word “edit” keeps resounding in my head. I need a wallet and a couple of wristlets would be nice, but I haven’t seen pictures of what’s up and coming for accessories. I wish Coach would give us more of a transition period from old to new.

Coach really has to find their target buyer to get the market back. And what about all those logo loving ladies? What happens to them? I think Coach is having an identity crisis and in order to figure out how to save themselves, they first need to figure out their market. Because really… do we need another Gucci? Or do we need a quality Coach for people who can’t afford $1000 for an “inexpensive” designer bag?

Insightful, IMO. When we first started buying Coach bags, the leather was “H” weight, and the bags tended to be ultra conservative looking, kinda clunky. But they were selling these types into the 1990’s. For my tastes, they represented “a quality Coach for people who can’t afford $1000…” Perhaps, they never were the definition of a “designer” bag company, and again, IMO, I believe they have a brand identity problem with the group who would casually spend $1k+ for a bag. Now, to put this in perspective, I buy some of their conservative totes to carry camera equipment in…My wife, a few more colorful items I bought for her for everyday wear. We hold some shares of the company stock, however, and I do believe that they are more likely to be purchased rather than go out of business. They are big in China. Now is a good time to buy a bit of their stock, hold onto it. But what do I know?

I think that to appeal to a customer base at a higher price point, paring or eliminating the signature bags is a smart move, especially from the outlets. So many girls and young women carry inexpensive signature bags that they can find at the outlet for under $100, and the plethora of them on the street makes them seem commonplace. As someone who is a fan of Coach leather bags, this strategy makes me very happy. The upswing in prices for boutique bags is something that I’m still getting used to. I don’t plan on deserting Coach for Michael Kors or Kate Spade, because I simply do not like the quality of those bags, but with the Coach price point going up I’ll probably end up buying fewer bags than I have the last several years… which is probably a good thing for my wallet!

Coach started my bag obsession about 10 years ago and they hold a special place in my heart. They can make a wonderful bag….comparable in quality to LV, Givenchy, Mulberry and Balenciaga (of which I have a bag from each of these companies to compare. This only includes Coach’s higher priced leather bags…not the fabric bags). I am thrilled to see the change with bags turning over to the outlet every other month. That reason alone is why I left…pay $500 for a new bag and find it for 60% off and in the outlet bin a few weeks later. They will turn it around but it will take some time. I’m doubtful that they will be able to get customers to pay $1k though. Also, I wish they would make a staple bag…ala Speedy, Alexa or City. Same bag that is tweaked in its color and hardware choice each season.

I would consider the Bucket Bag to be a Coach signature look. They should maintain this bag year-round. It’s not the most fancy, but it’s practical and timeless.

When I started my interest with bags 10 years ago it was all high-end brands for me: LV, Gucci, Burberry, Bottega Veneta, Chanel, YSL, etc. As the years go by, the price points of these brands have gone up astronomically and though I could still afford the bags I scoff at the prices and could not get myself to fork over so much money. Now I’m a fan of Marc by Marc Jacobs. I went inside a Coach boutique over the weekend and was surprised with how different and sophisticated the new bags looked at prices which even I would approve of. I walked away with a baby blue Madison North/South tote in saffiano leather which was on sale.

I feel that I make fairly decent money and I love a good purse. I still don’t understand how so many women can afford, or will pay, $2, 000 to $7,000 for a purse. And this can be a small purse for a few brands

I’ve always thought that even if I had millions to spare I would never be the type to own $10K bags in different colors. I think that’s ridiculous. I like luxury items as much as any girl, but I’d feel bad spending that much $$$ on something that’s likely to go out of style.

I have high hopes for them. I have only purchased one leather bag from them 10 years ago and stopped when they started becoming the new mallrat bag. To me these changes are necessary and are clear enough that I think will help them greatly long term.

Never had any interest in their bags.

This may just change that.