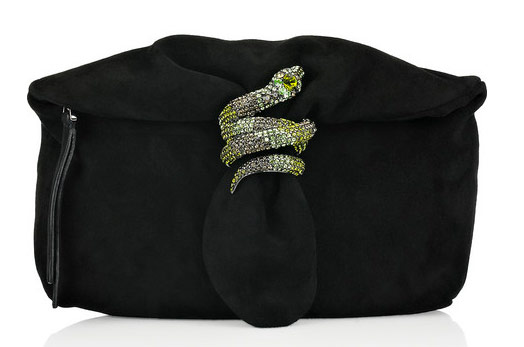 If you spend as much time on the Internet as we do (for your sanity’s sake, we hope you don’t), you’ve surely heard that a poisonous cobra has escaped from the Bronx Zoo and is now amusing and terrifying much of New York City. No one has any idea where the snake has crept off to, but now has its own hilarious Twitter account and has taken the place of Charlie Sheen as the Internet meme du jour. The Bronx Zoo cobra is doing all the winning now, Mr. Sheen.

There’s only one proper way to celebrate this slithering little wastrel, and no, it’s not with a snakeskin handbag. That would probably just upset him, and if you were to come across a poisonous cobra, the last thing you would want to do is hurt his feelings. (Or worse, make him think that you want to catch him and make him into a tasteful evening bag.) No, ladies, you need to immortalize the Bronx Zoo cobra in gemstones with the help of the Jimmy Choo Candice Snake Suede Clutch. I think there’s a “snake charming” pun in here somewhere.

I have a thing for reptile jewelry anyway, and that includes several crystal-encrusted snakes in my collection, usually in the form of bracelets. This clutch would have appealed to me as a way to tie my handbags into my costume jewelry stash, but the synchronicity of its appearance right as a snake has taken over meme culture adds an extra layer of appeal. At some chic Manhattan boutique, I’m sure that some very clever socialite is thinking the same thing and buying this clutch right now. Hopefully the snake will be located soon so that this clutch can go back to being just a normal evening bag with a vintage twist. Buy through Net-a-Porter for $1595.