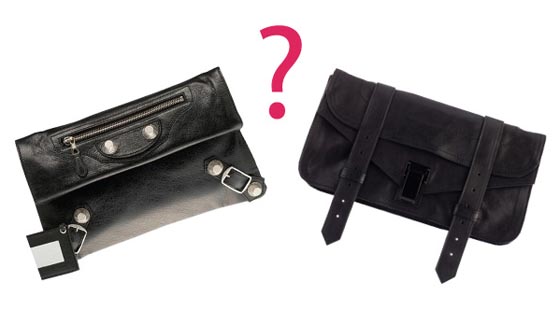 I need a new bag. It’s been quite a long time since I bought one – far too long for a person that spends eight hours a day pondering the finer points of various designer purses. I’m moving to Atlanta soon and I think that getting a grown-up clutch would be a great way to mark the transition. You see, I’ve spent the past two years taking something of a post-graduation victory lap around my college town, and when you go to college bars, a fancy clutch is kind of a dangerous thing to have.

It’s not that I was afraid it would get stolen – that would have been the least of my worries. It’s just that my usual haunts are beset by sticky floors and puddle-laden bar tops, and it seemed like there would be dozens upon dozens of ways for me to ruin a nice bag in one of them. Now that I’m going to have the opportunity to frequent some slightly classier joints, I want something a little bit more appropriate. The only problem is that I can’t decide which clutch I want. PurseBloggers, I need your assistance. For your convenience, I have created a poll.

First, the matchup: I’ve chosen two large, black clutches for reasons that I think are obvious – the color and size provide the maximum versatility, and somehow, I don’t have a big black clutch in my closet yet. Both bags will fit everything that I need to go to a nice restaurant or upscale bar, and they’d both coordinate easily with most of my wardrobe.

Let’s take a look at the contenders. First, we have the Balenciaga Envelope Clutch. We all know that I’m a big believer in the Balenciaga gospel, and it seems almost natural for me to reward myself with yet another one of their bags. This would be my fifth bag and fourth different style from the brand, although none of my Balenciagas have been black OR clutches.

And then there’s the Proenza Schouler PS1 Pouchette. Proenza is much newer to the handbag game than Balenciaga is, but I so thoroughly love the brand’s aesthetic and previous work that I’m nearly salivating at the thought of adding one of their bags to my collection. With Proenza’s profile rising every season, this might be exactly the right time to get in on the ground floor while before their bags are widely coveted.

The ultimate consideration is usually price, but both the Balenciaga and Proenza Schouler clutches are in the same ballpark. The Balenciaga (which is also slightly larger) will set you back $1025 at Balenciaga.com, Proenza is a bit more modest at $895, also via their online store.