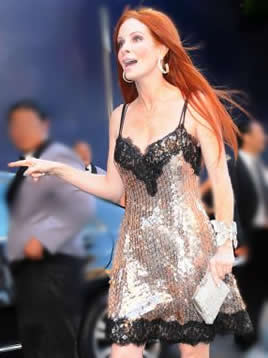 I am typically on top of celebrity gossip, but for the life of me I have no idea, nor do I care, who Phoebe Price is. What I do know is that this red head was denied access to a Chanel Robertson Blvd. party. And this nobody was so pissed off, she went home to get the invite and prove to the PR girls at the door that she was on the list. Only to be denied again. So what did she do then? Grab her Jacoby & Meyers lawyers and held a public press conference outside of the Chanel store. She let Chanel know that if the PR girl in question was not fired and if she was not issued a formal apology by Chanel, she would sue. Phoebe has dragged this out, going on to talk to any paparazzi near her letting them know that if this is not settled she definitely will file charges so that no other celebrity has to be put through this again. If you ask me, I would call this red head a total drama queen. There has not been word yet if Price was actually on the list, if the PR girl was fired, or why I was not invited to the party. What I do know is that Phoebe Price is going to make this as big of a deal as she can for as long as she can. It will be interesting to see how it pans out.