The Many Bags of Gwyneth Paltrow 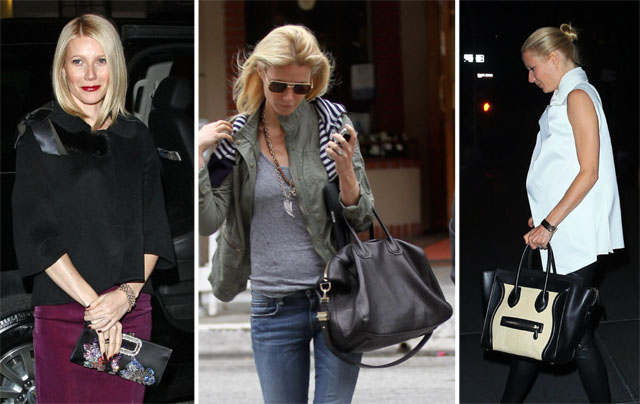 I don’t remember exactly when I shifted from hating Gwyneth Paltrow to absolutely loving her, but it’s a relatively new phenomenon. I had always been annoyed by her macrobiotic proselytizing and her Tracy Anderson workout-endorsing and her general little-miss-perfect-ness, until one day, it finally occurred to me: that’s actually who Gwyneth Paltrow is. She’s just being herself, despite the fact that it annoys a lot of people and gets her some bad press and causes people to say nasty things about her on the Internet. She just keeps on being Gwyneth, even though it would likely pay dividends for her to pretend to be some kind of self-effacing, less-than-Gwyneth version of herself who eats gluten and cares about finding a good deal on a pair of shoes. Once I realized that, my love for her was instant.

Since my moment of clarity came to pass, I’ve kept up with her like the fangirl I am. I’ll never be trying any recipes from her cookbook, to be clear, but I like the neat, modern perfectionism that she brings to things, particularly her personal style. Of course, it doesn’t hurt that she’s friends with Tom Ford, Stella McCartney and Hedi Slimane, but something tells me that if Gwyneth weren’t rich, she’d still be out there hustling to look just like she does now. Some people are just like that, and I can’t hate on it. I also can’t hate on most of her handbag choices, which I’ve detailed below for easy reference. 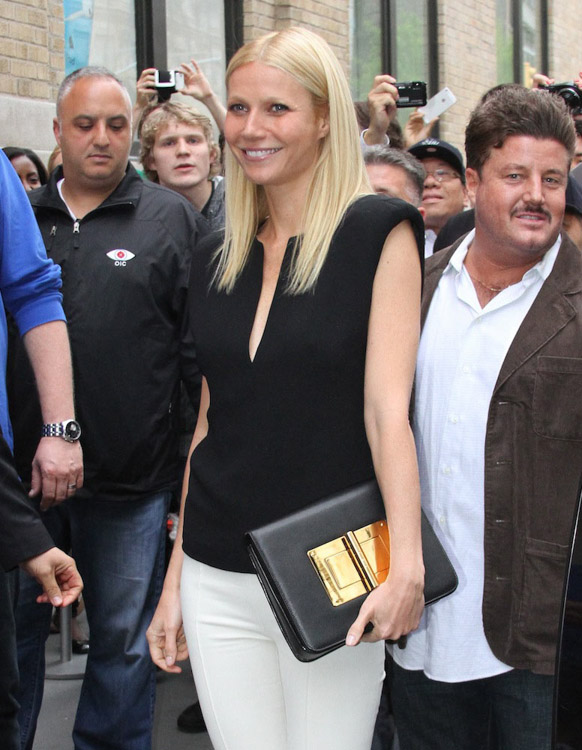 Black and gold is something of a thing for Tom Ford – Gwyneth carried the Tom Ford Natasha Anaconda Wristlet Minaudiere with a very Gwyneth white dress. $1,980 via Neiman Marcus. 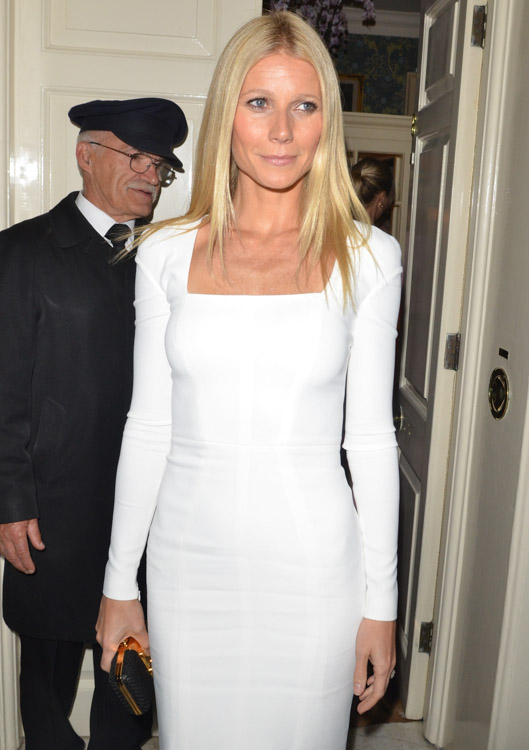 I don’t know for a fact that the black clutch Gwyneth carried to GOOP’s summer launch party was Tom Ford, but I have strong suspicions. After all, everything else she wore that day was Ford’s exquisite handiwork. Buy Tom Ford via Neiman Marcus. 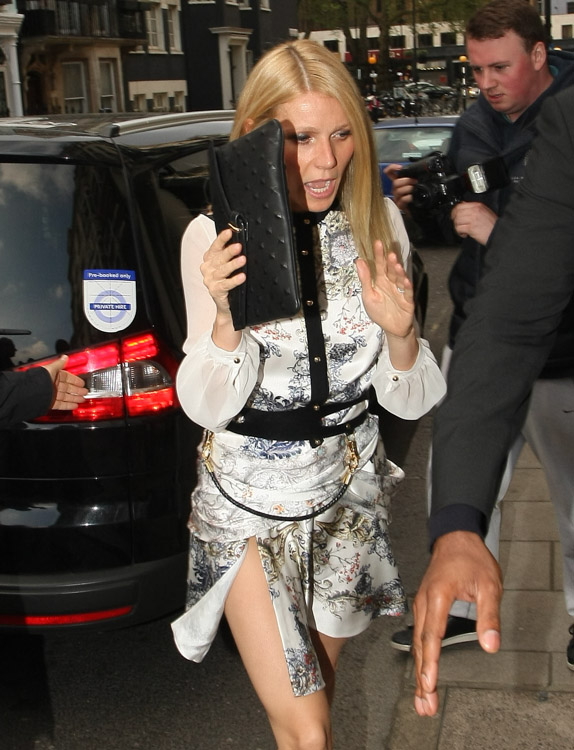 Gwyneth has a very neutral color palette that she prefers for her bags, and lately, she’s been spotted with several ivory-and-black options, like this Celine Luggage Tote. Shop pre-owned Celine via Portero. 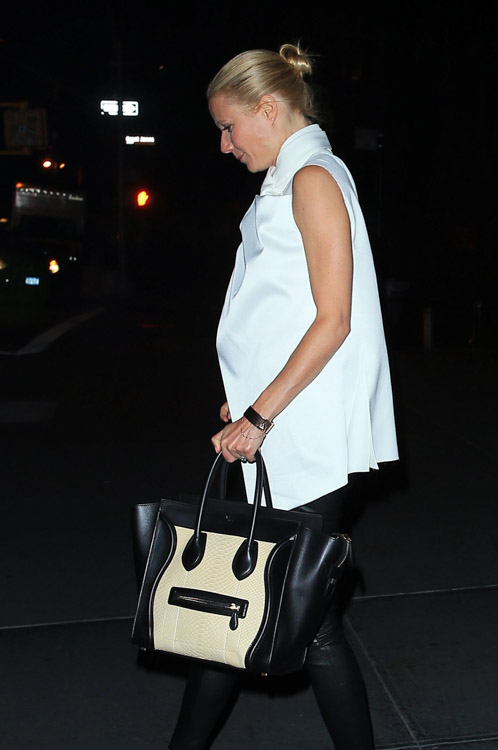 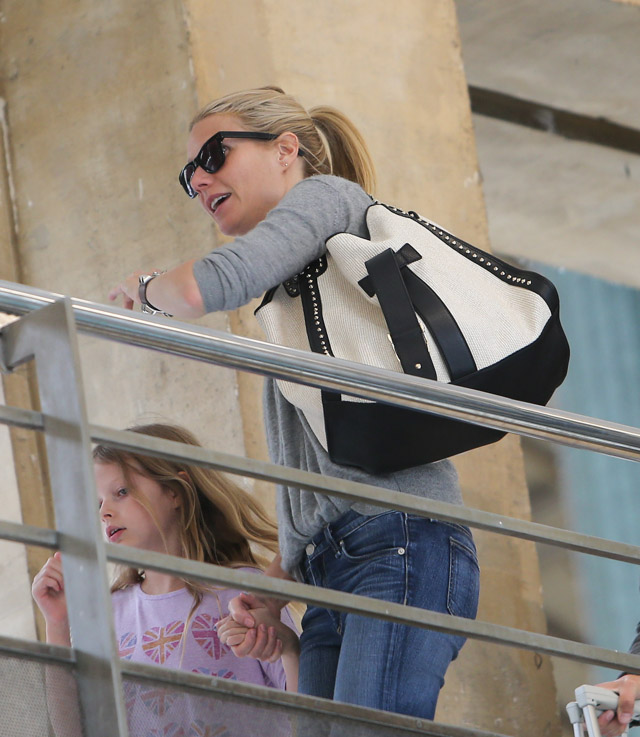 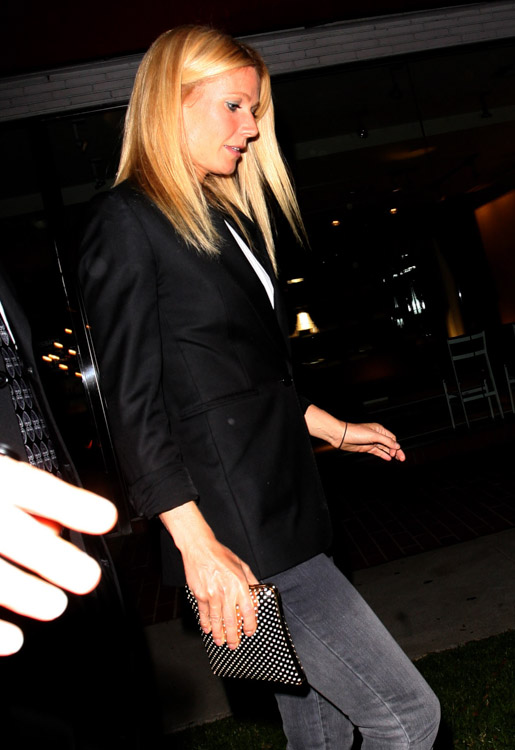 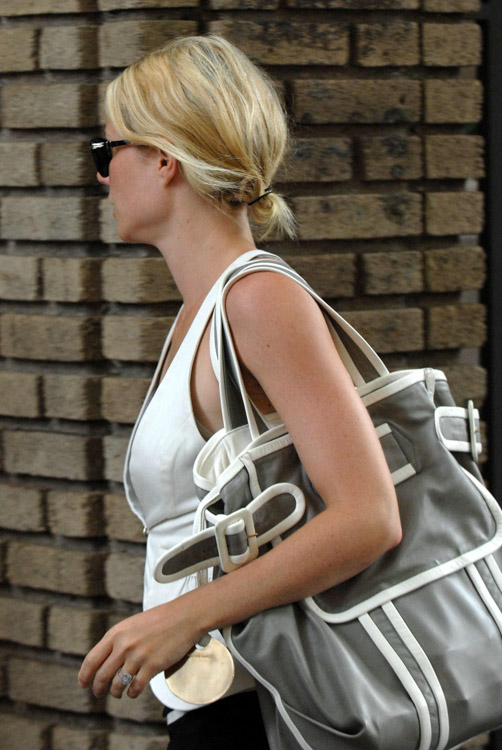 It’s hard to tell from this photo (and it was the best one we could find), but Gwyneth’s Victoria Beckham Two Tone Shoulder Bag appears to be largely grey as well. Shop Victoria Beckham via Net-a-Porter. 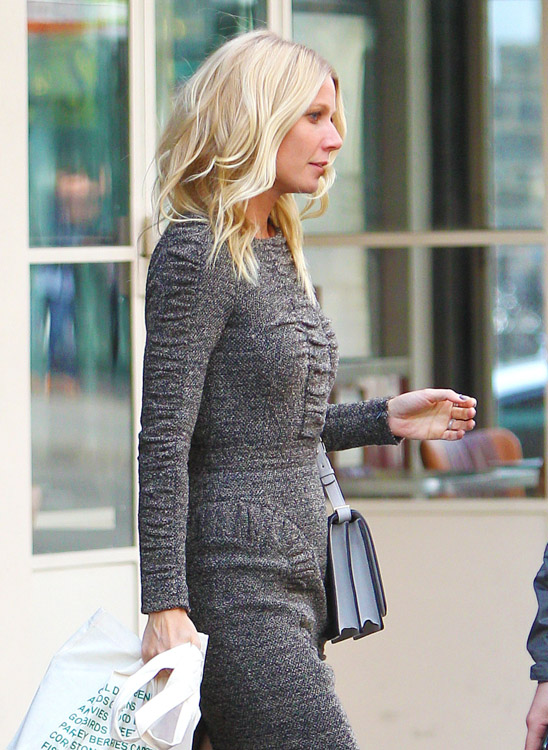 More grey for Gwyneth, this time by way of the Alexander Wang Emile Satchel. Buy through ShopBop for $925. 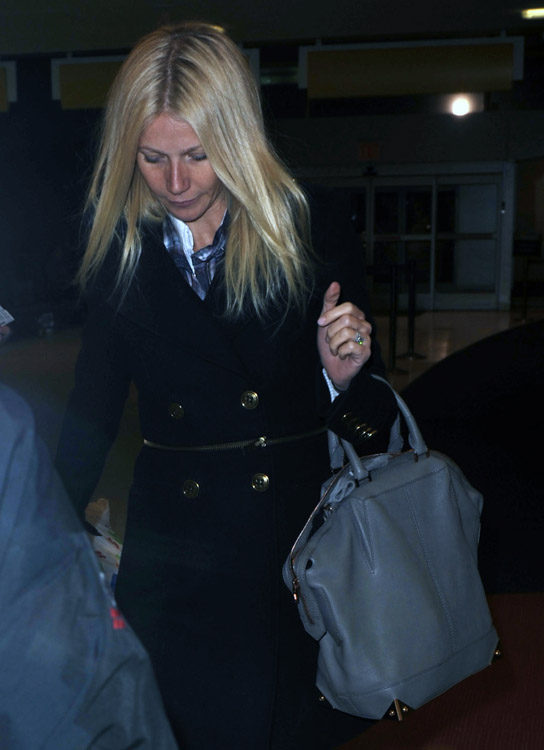 And even more grey! Gwyneth was the first celeb spotted with the Saint Laurent Classic Duffel Bag. Buy through Neiman Marcus for $2,650. 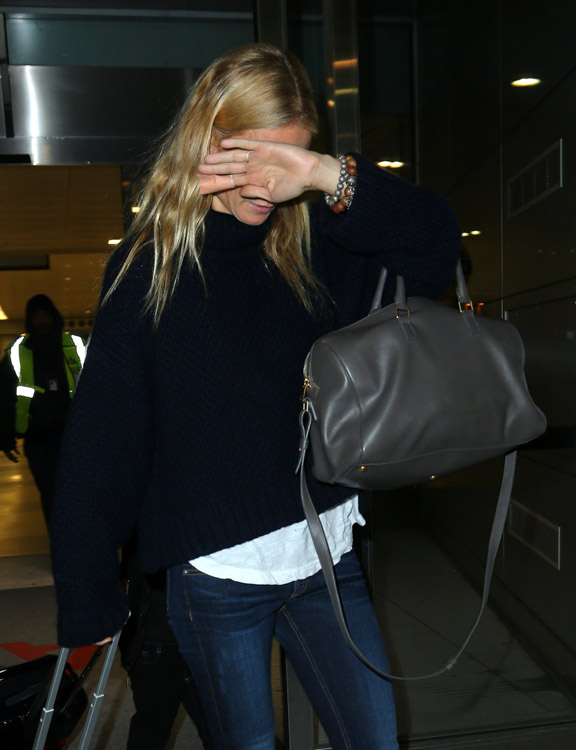 Perhaps the biggest departure from what I expected to see from Gwyneth was that she has a couple of Coach bags, like this Coach Legacy Penny Shoulder Purse. Then I remembered that Gwyneth did an overseas ad campaign for Coach and it all made sense. Buy for $198 via Coach. 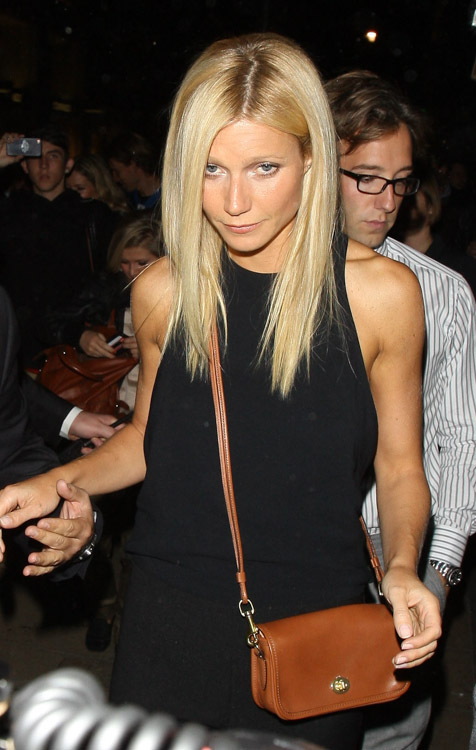 The Internet tells me that this snakeskin clutch is also Coach, and that Gwyneth carried it to a Coach party, but I’m dubious. Shop Coach via the brand’s website. 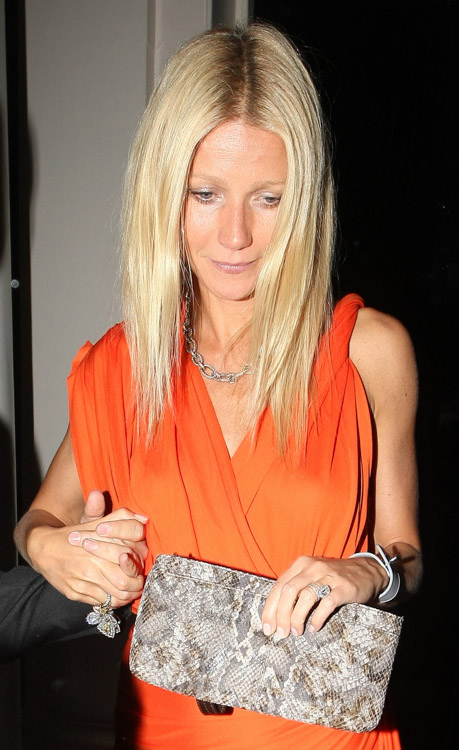 Gwyneth’s always a good sport when she goes to a brand’s events – here she is in London, celebrating the opening of a Louis Vuitton Maison, carrying a Louis Vuitton Sequin Clutch. 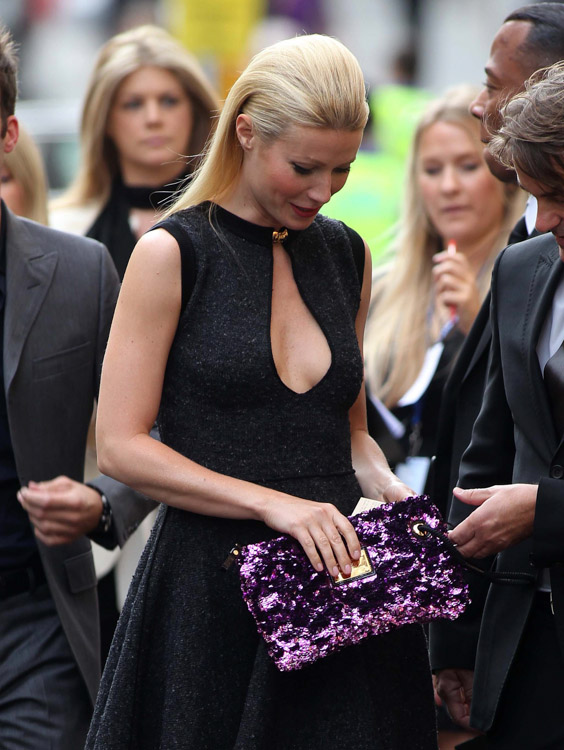 On the red carpet, Gwyneth’s clutch choices are a little bit more subdued, like this lovely Roger Vivier Pilgrim Clutch. 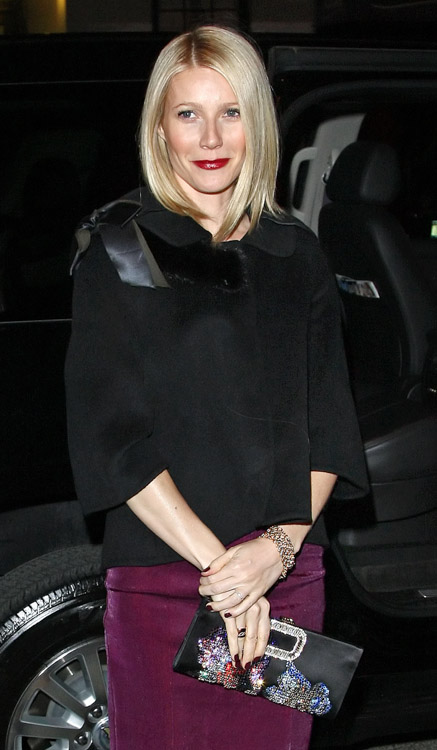 This Jimmy Choo Cosma Clutch, paired with a netural, figure-flattering gown, is classic Gwyneth. $1,595 via Nordstrom. 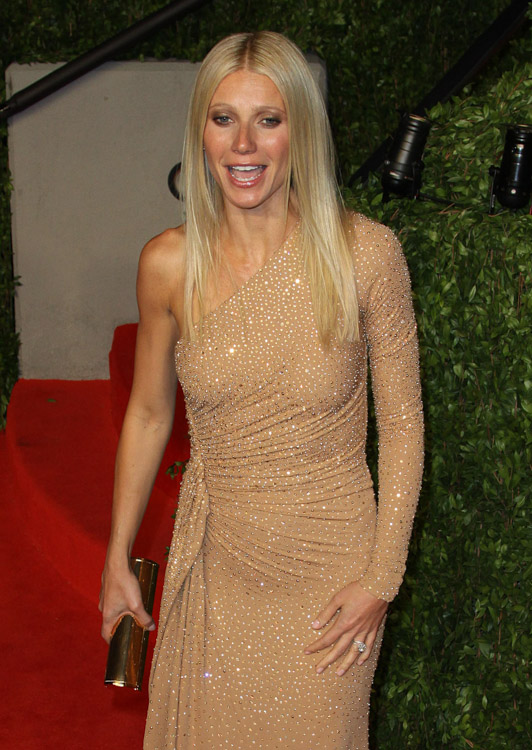 This tonal Prada Satin Clutch blends in with Gwyneth’s dramatic gown. Buy a similar clutch for $650 via Saks. 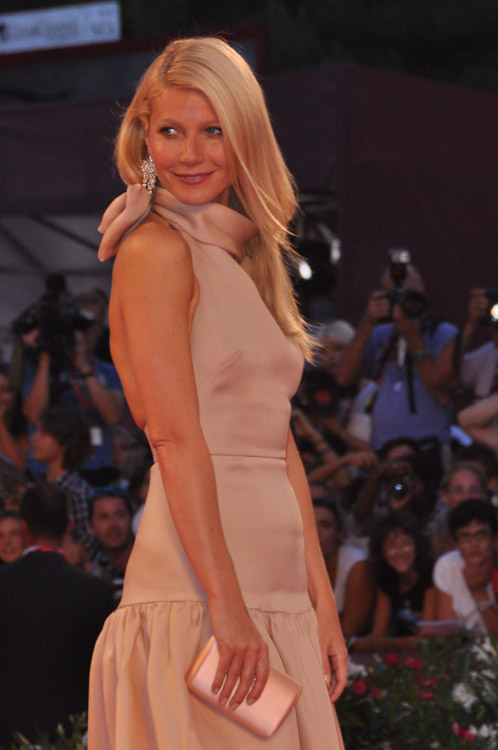 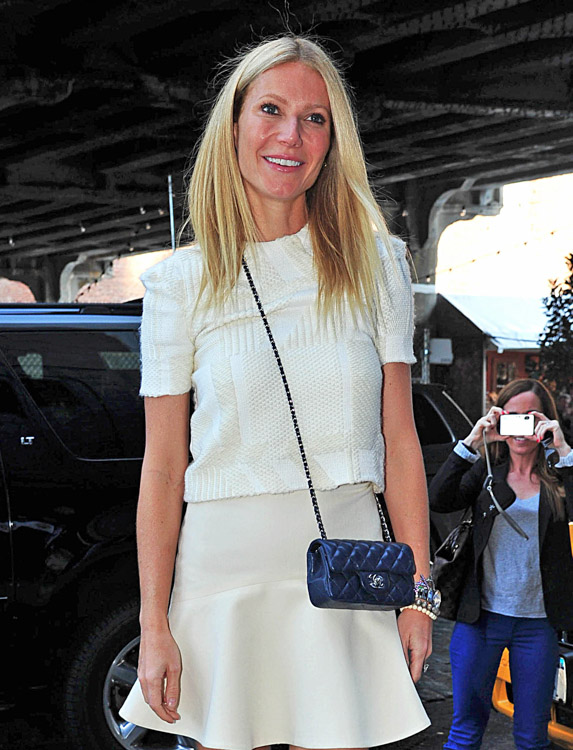 Believe it or not, Gwyneth does occasionally look like the rest of us – when she’s coming from the gym, for instance. Except her gym bag is a Goyard St. Louis PM Tote. 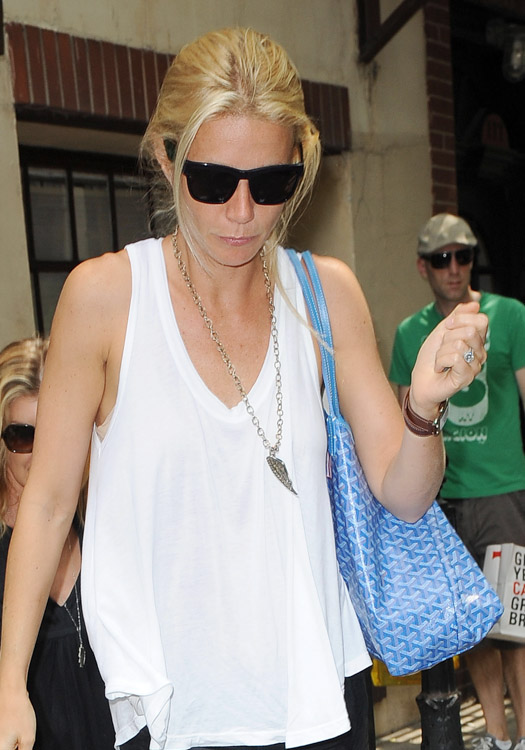 Balenciaga might be known for its colors, but believe me when I tell you that Gwyneth’s are all dark, like this black Balenciaga City Tote. $1,895 via Neiman Marcus. 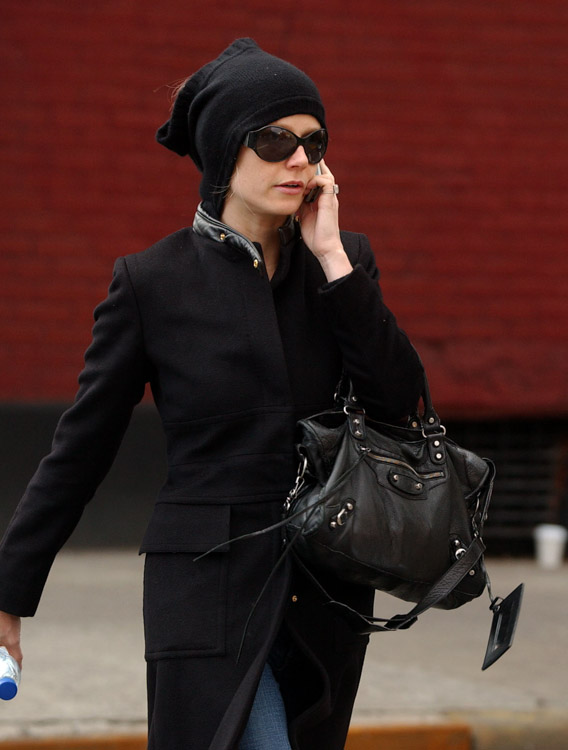 Gwyneth’s Balenciaga Weekender Bag, which she uses a lot for travel, is similarly inky. $1,845 via Neiman Marcus. 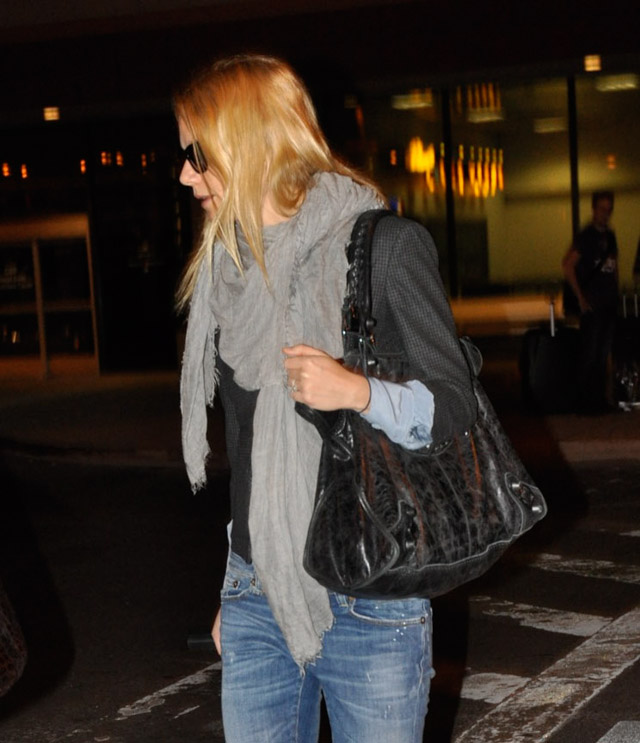 The Givenchy Antigona Bag maybe be a huge celebrity favorite now, but Gwyneth got in on the ground floor – back when some of the Antigonas were still slouchy. Buy through Bergdorf Goodman for $2,405. 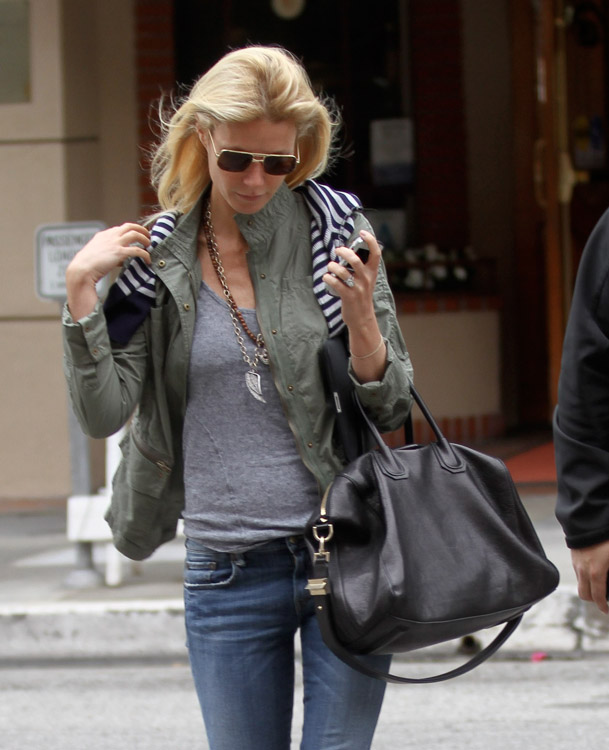 We can’t blame her. She was born with a silver spoon, to begin with; can act; an entrepreneur but puh-lease give me a break with all these macrobiotic diet rubbish; scandal-less marriage; plus she knows what looks good on her which is just an icing on the cake!

I really don’t care for Gwyneth, but I have to say that I LOVE Tracy Anderson. Her workout DVDs have helped me to completely change my body. Because of that, I’m willing to overlook the fact that she seems to be Gwyneth’s BFF.

I actually don’t really get the hate on Gwyneth. I kinda like how unattainable she looks like, how classy she always looks, especially her outfits. Is that normal? :p

Can I raid her closet?

I didn’t like Gwyneth either until the moment someone asked me about it and I couldn’t say why. Anyway, you forgot to mention that she’s also besties with Beyonce. I like her though- she does seem authentic… I really like her bag choices, and she makes me feel better about the lack of color in my arsenal.

I think she has great style….and I like anyone almost anyone with great style. LOL!

I’ve met and spoken to her on a few occasions and she was beyond nice which is why it pains me to also dislike her. I’ll start to warm up to her a little then I’ll read something she said that was obnoxious and that overwhelming feeling of dislike washes over me. It’s so strange how she looks so benign but people have such a visceral reaction to her.

I think people don’t like her cuz she really has it all together. Somehow that makes people feel worse about themselves. She has so many talents–acting, singing, cooking, business woman, speaks several languages, she’s fit, etc. and she really is nice.

I think, most people are just jealous of her. She is coming from a wealthy family (and should not be ashamed of that), has a very good career (hello Oscar), can sing, has a successful homepage, writes cookbooks, has a scandal-free marriage with the very sweet, adorable and also successful Chris Martin, two well educated kids…. for some people its just too much.
And for most of the time, I like her style. Yes, it is a bit predictable, but really, she knows what looks good on her, and that is perfectly fine.

I disliked her too, and it was because evangelism of most sorts rubs me the wrong way. Have you heard the good news? No thanks, don’t want to. Want to go vegan? No, stop pressuring me. This diet is the only way to live! No, it isn’t. But I really enjoy her portrayal of Pepper Potts, so I like her now.