Viva Bag Diversity! Celebs Step Out with New Bags from Moschino, Anya Hindmarch and The Row 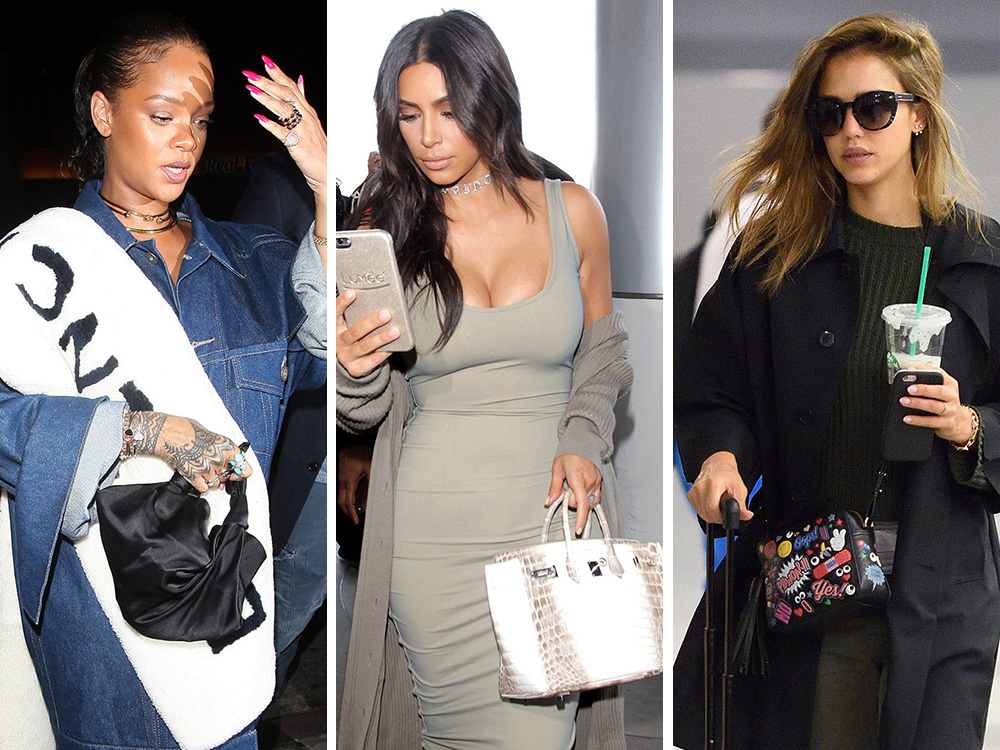 The gods have heard my cries and celebs have suddenly changed their lifestyle handbag-carrying habits accordingly. The endless sea of Chanel and Hermès bags has suddenly (almost) run dry (can't speak for next week, though), and celebs are finally choosing to dine somewhere other than the same two West Hollywood eateries! And the bag choices are at least interesting and diverse, even if the bags themselves are maybe not your favorites. It's all a girl could ask for on any given week. Well, it's all this girl could ask for, at least.

Let's start these proceedings with a pic of Amber Rose just KILLING IT as she leaves Sushi Roku in West Hollywood. She looks just like a 1980's Nintendo video game villainess, and I LOVE it. Also, she's carrying a furry Moschino bag, because Moschino is basically all she carries. 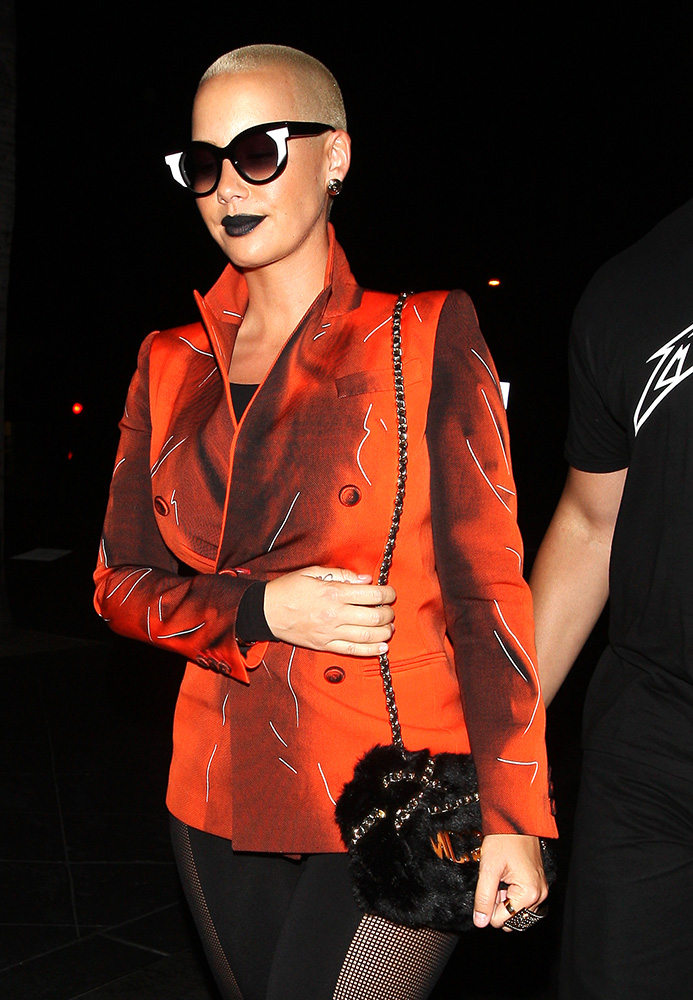 You guys, I don't feel we've been paying enough attention to Ashlee Simpson. Here she is, leaving Dan Tana's with husband Evan Ross and a lush velvet Saint Laurent clutch. Celebs are making some pretty diverse dining choices this week; it's not all Craig's and The Nice Guy! 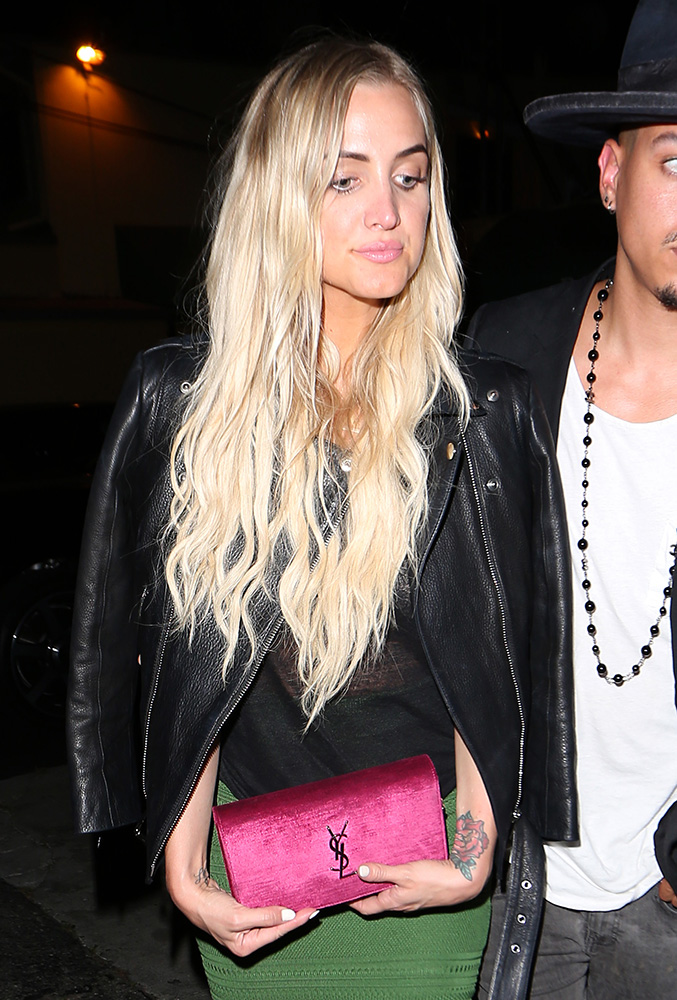 Christy Turlington was recently snapped carrying this practical, bicolor Rag & Bone satchel in NYC. I have never seen a celeb carrying this bag before, and that's slightly shocking, because it seems it's been out for a while. Celebs are pretty hardcore about Rag & Bone boots--why does the love not translate to handbags? 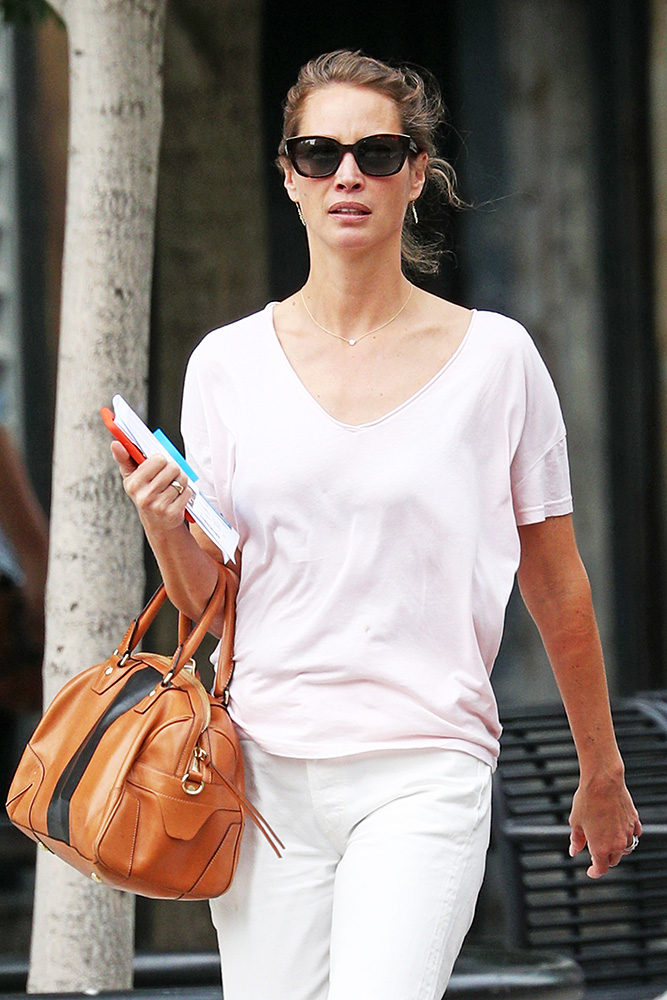 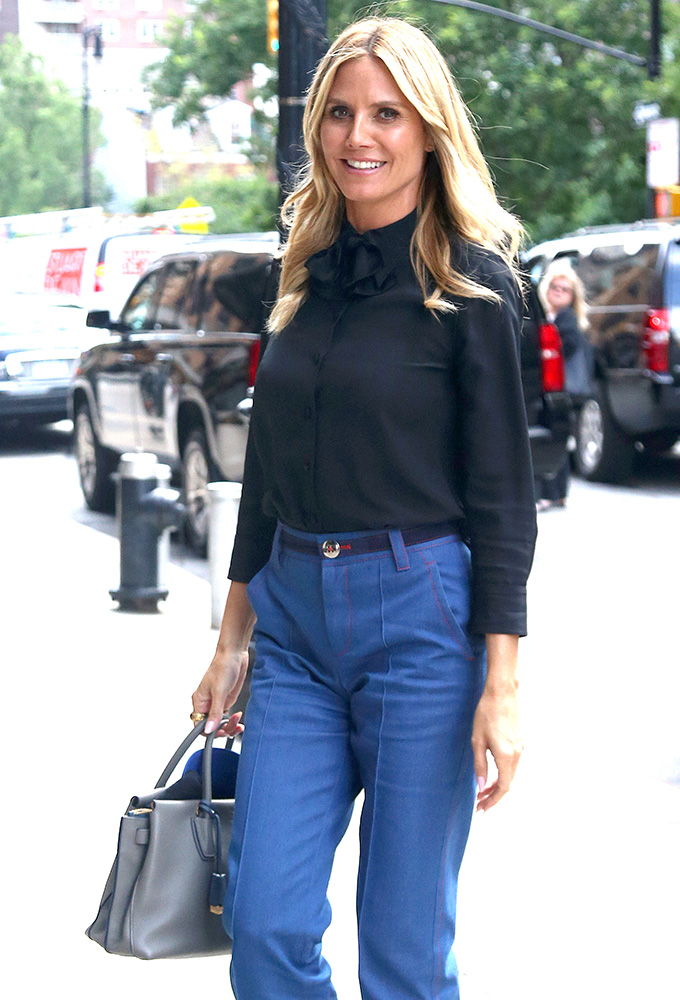 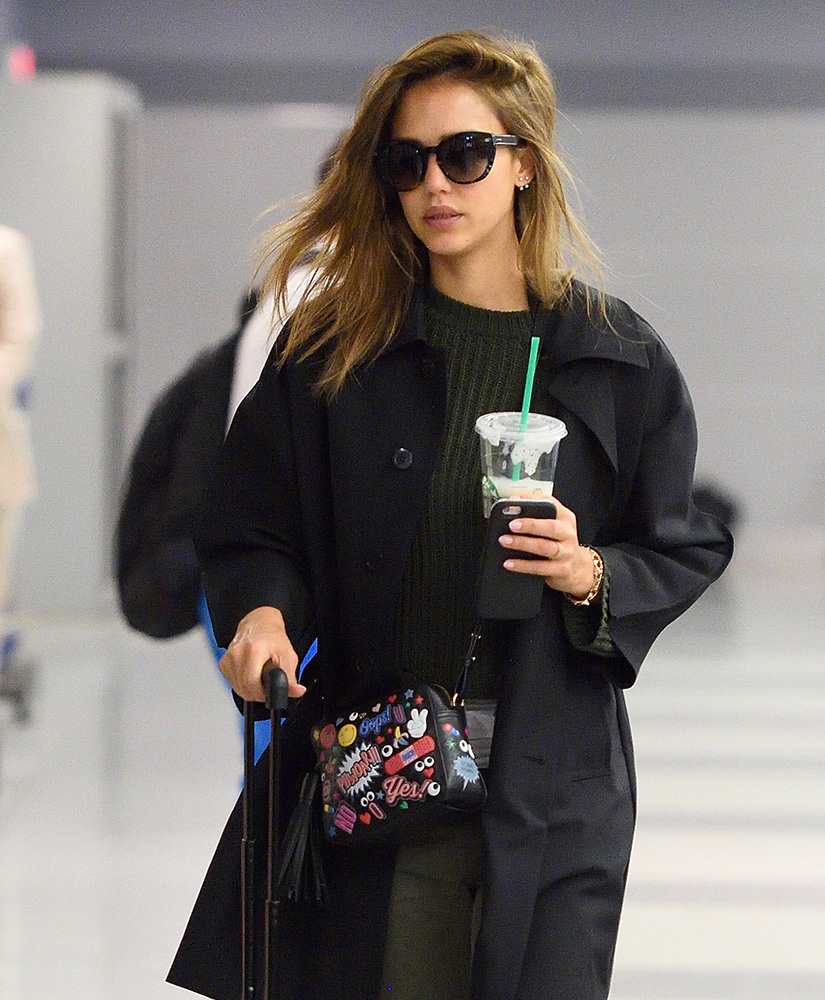 Here's Kendall Jenner, carrying one of her favorite bags to lunch in LA with Khloé and Scott. (Yes, he somehow remains in the Kardashian family circle's orbit.) Kendall isn't really carrying anything else besides Givenchy and Hermès these days. 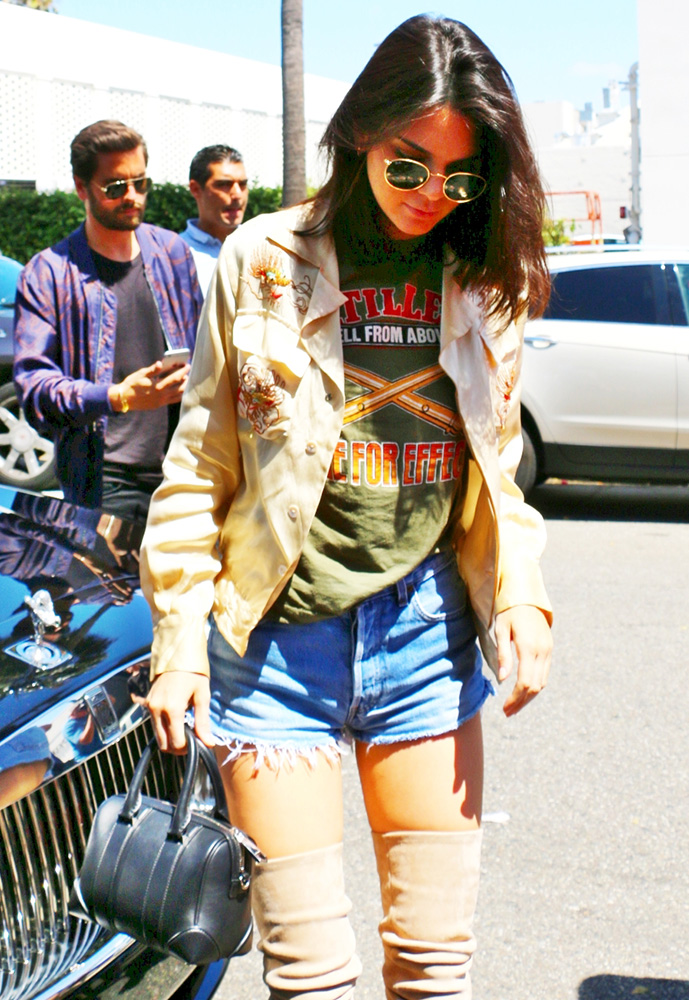 Here's Kim K., enraptured by her phone while at LAX with Kanye and what I can only assume is her most prized possession (aside from her kids, though if she still likes this bag more than the new one I won't judge), the Hermès Himalayan Crocodile Birkin. 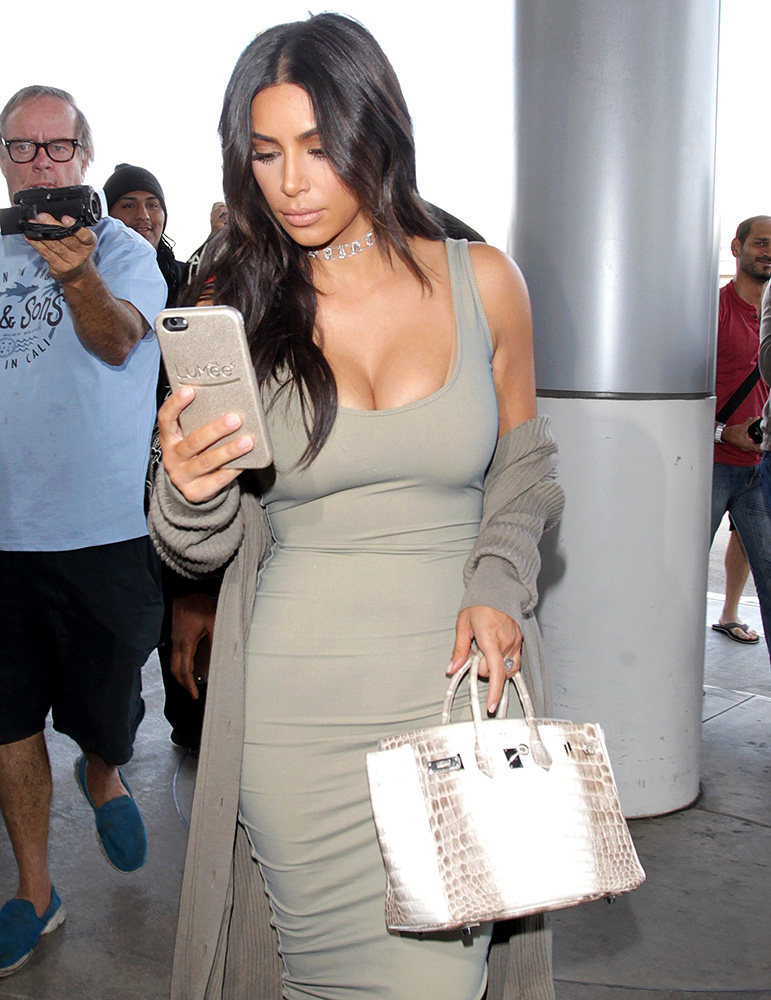 We leave you to puzzle over this pic of Rihanna heading into The Nice Guy to party with Drake. Denim and shearling wraps? I am usually on board for all of Rihanna's life/fashion choices, but I can't wrap my mind around this one. 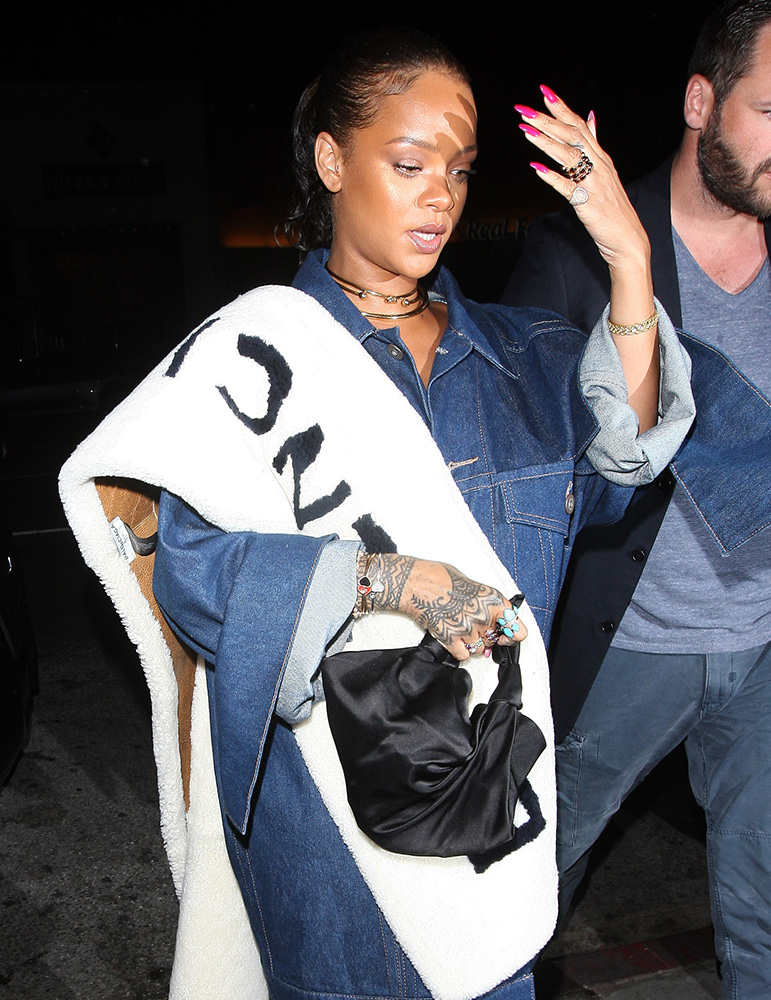