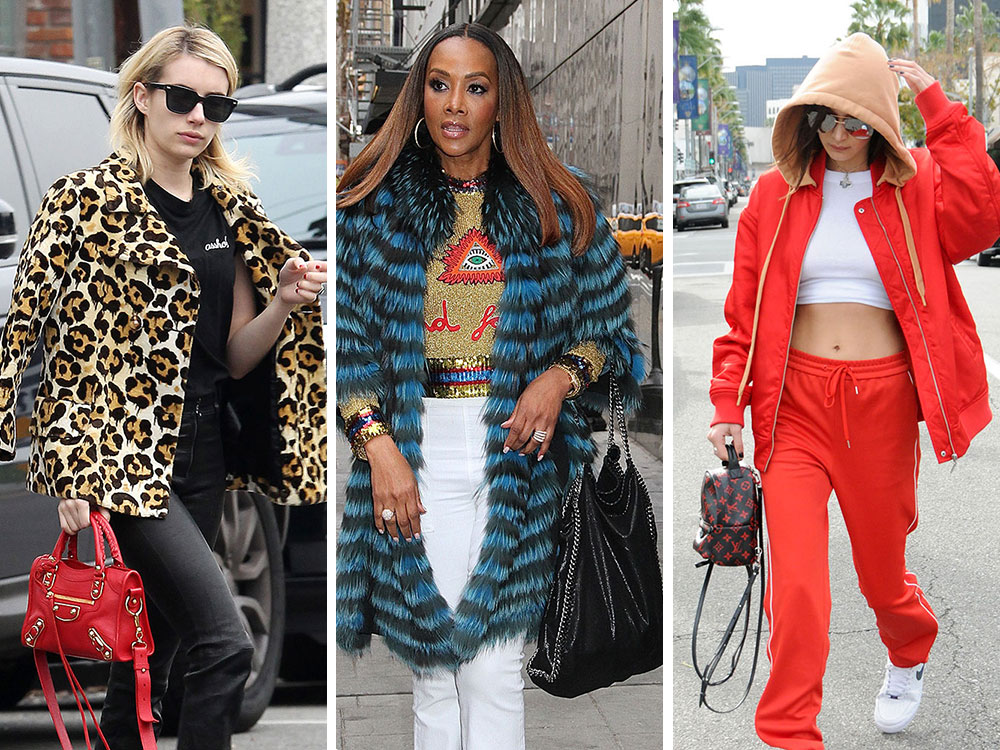 Versions both new and old of the Stella McCartney Falabella have rather suddenly appeared on several celeb arms. But that’s not the only thing celebs adore this week–they’re also quite partial to a certain red hue, as well as logos. Lots of logos. Also, we have a double dose of Vivica A. Fox in this celeb handbag round-up, and that should definitely excite you every bit as much as it does me.

Paparazzi spotted Anna Kendrick carrying a periwinkle blue version of the Falabella outside of Kate Somerville in LA. 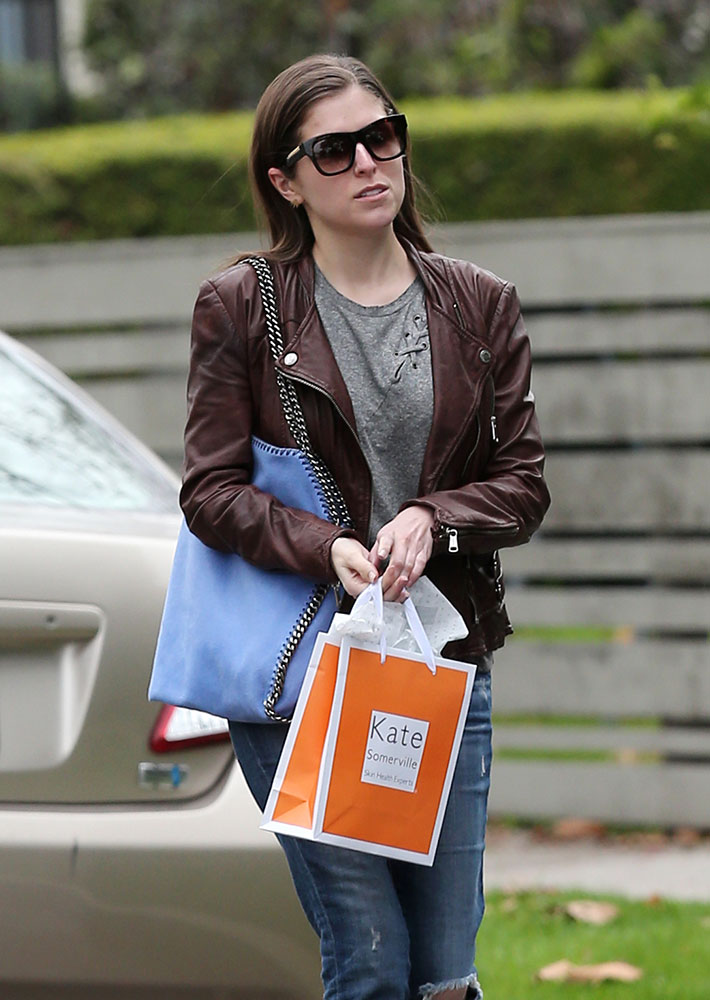 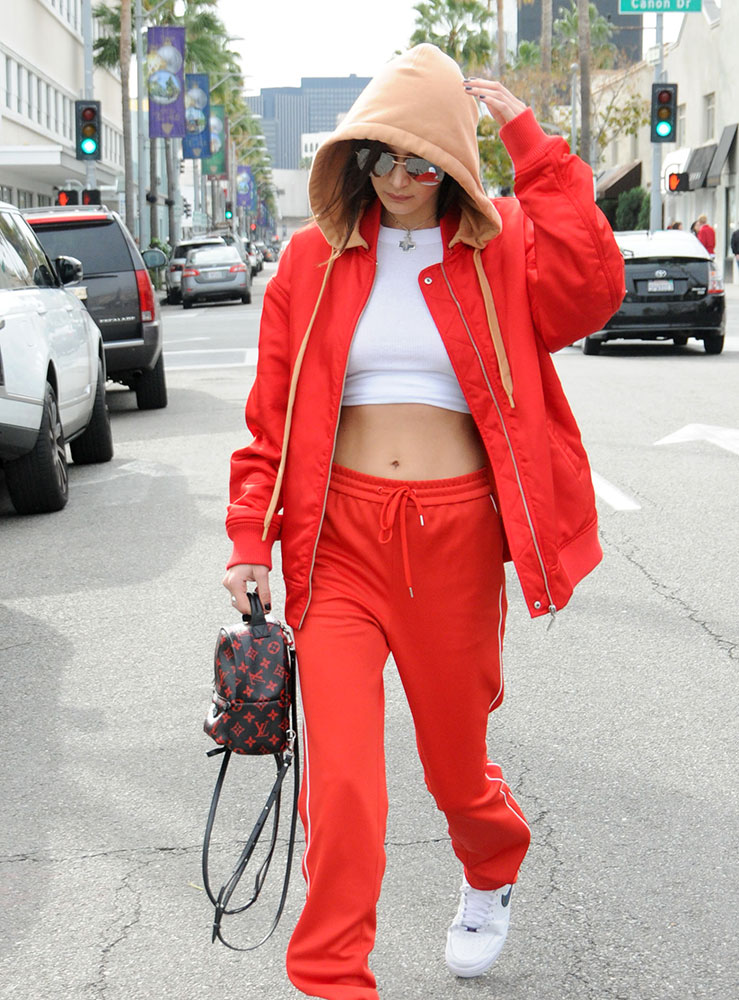 Emma Roberts loves hot red and she loves leopard print, but she wears both sparingly, in keeping with her generally minimal celeb style. So this outfit is mildly shocking, in its own Emma Roberts-appropriate way. 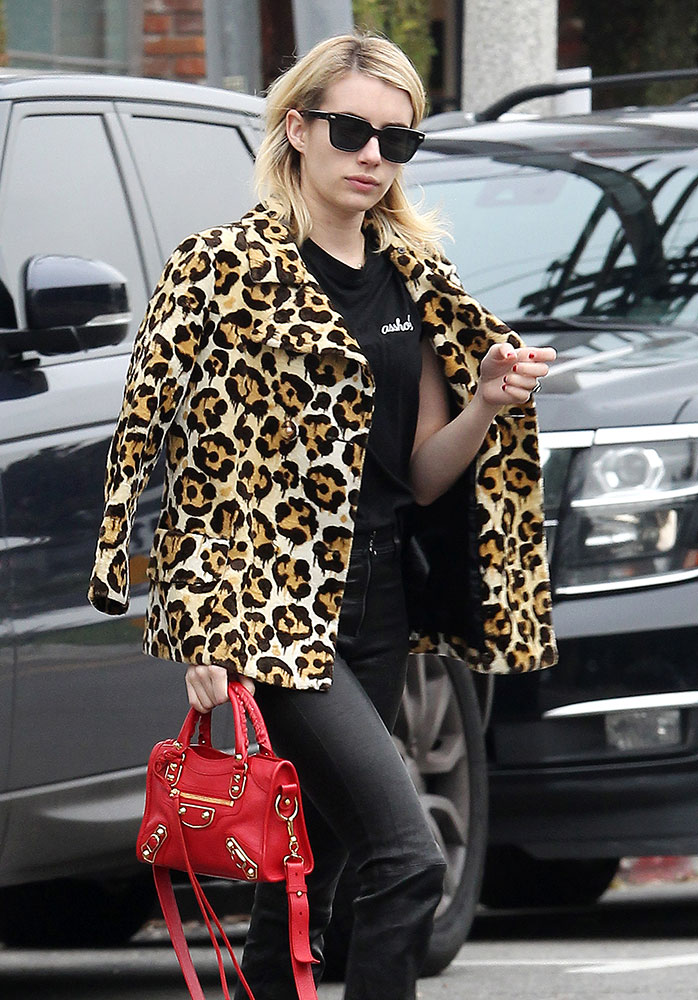 Props to Julianne Hough for bringing this bag by Strathberry to our attention. You probably didn’t realize the fashion world was missing a legitimate Scottish handbag label, did you? Neither did we. We’ve got our eye on you, Strathberry. 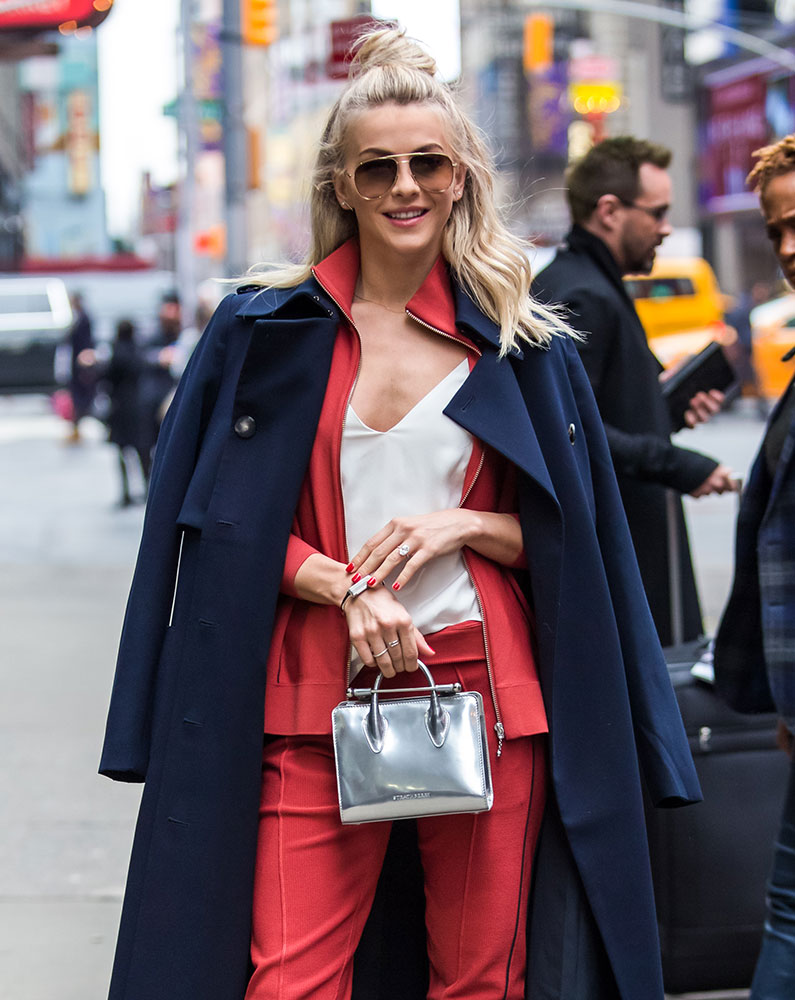 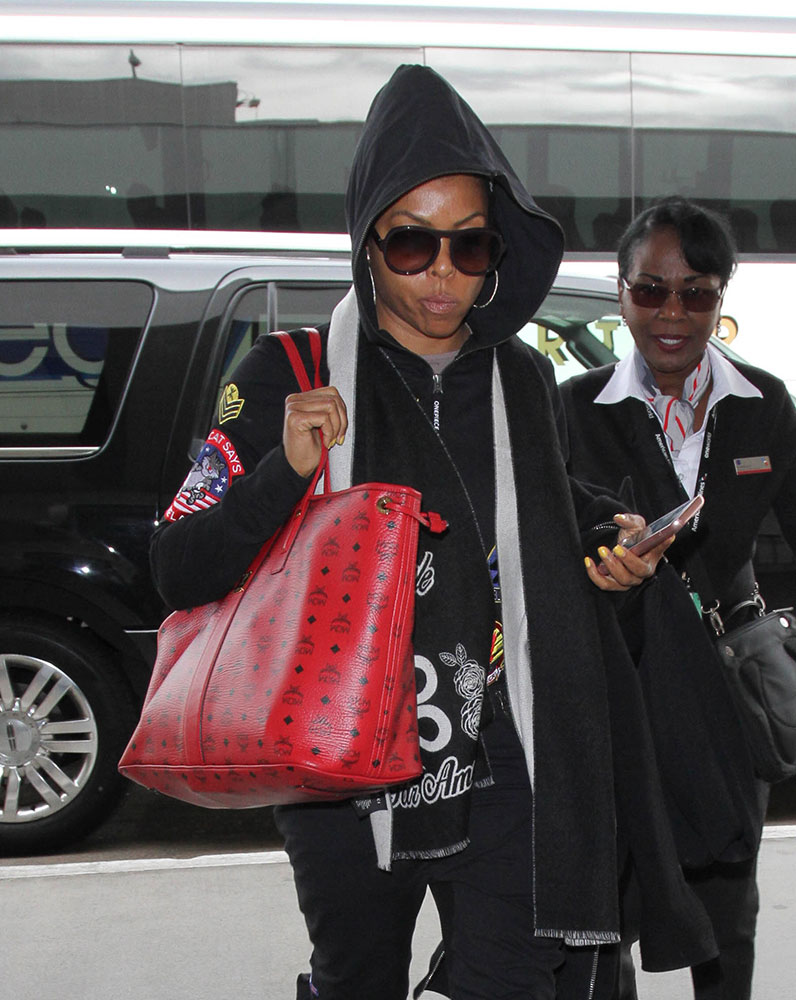 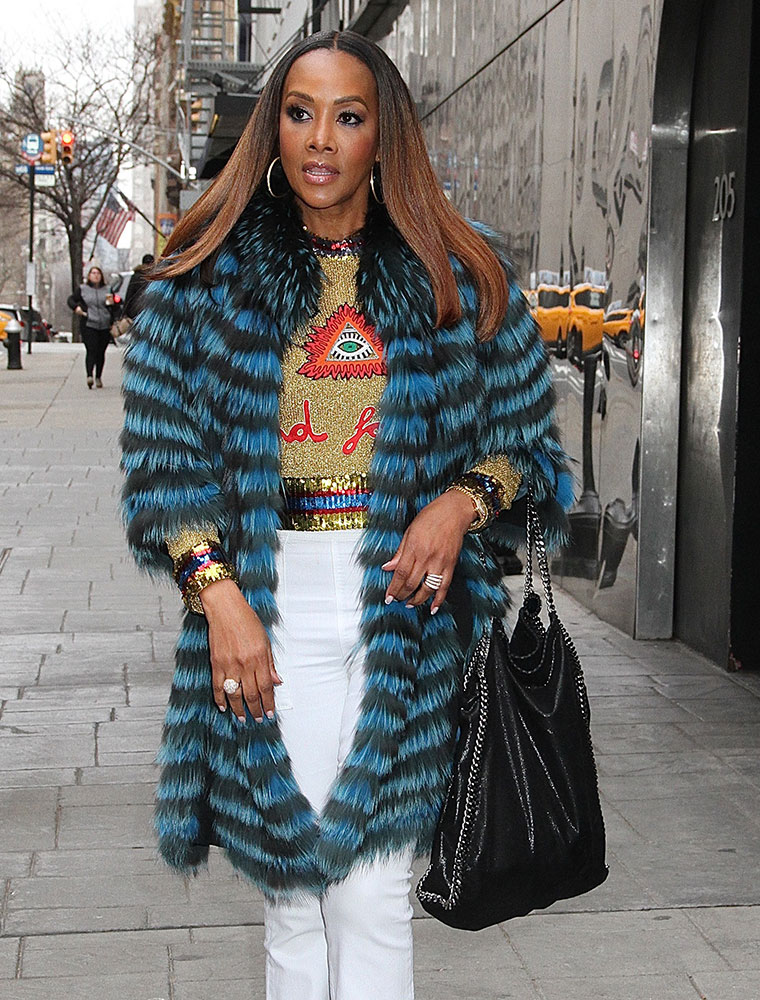 And she carried another baby pink version to make a separate appearance on The Wendy Williams Show. I feel like The Many Bags of Vivica A. Fox may be in the stars soon. 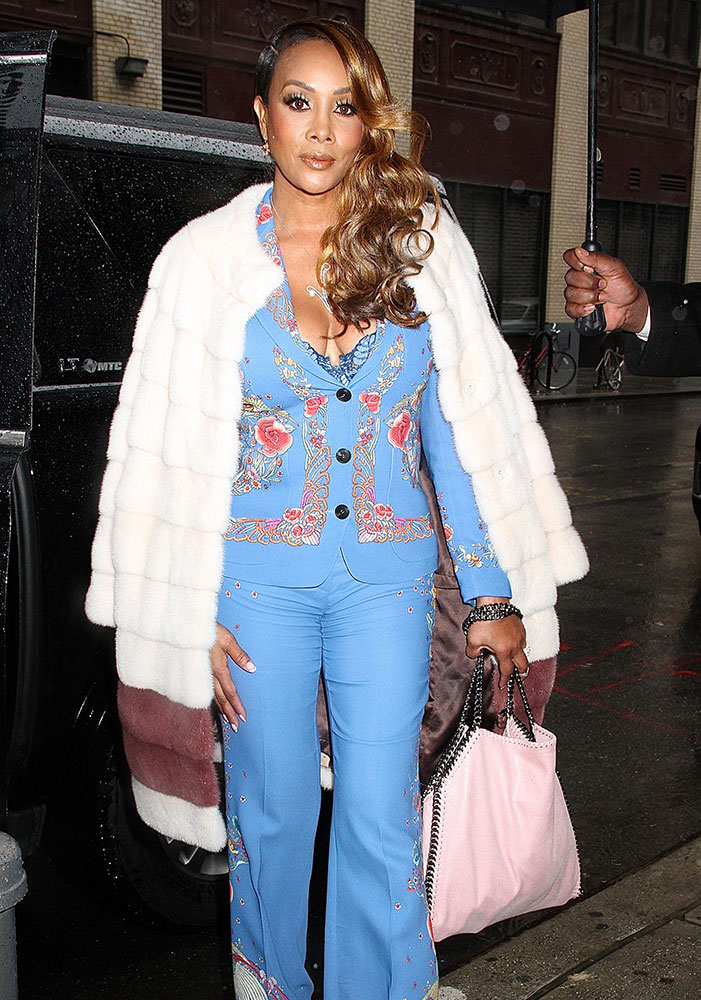 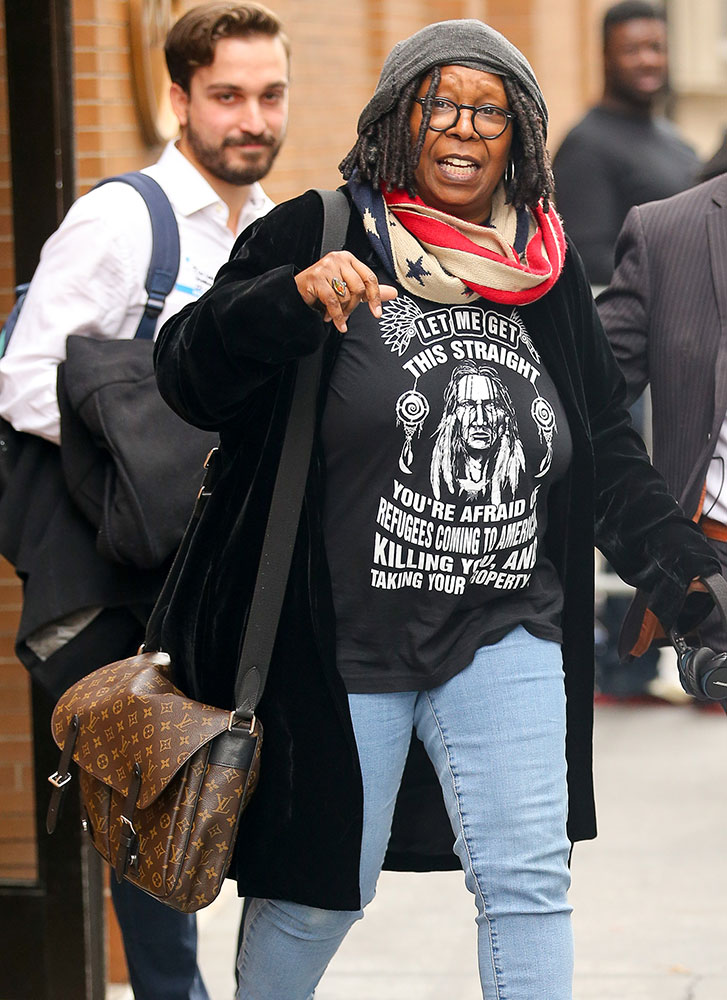 Viveka used to be beautiful, now she is a botox hot mess and who carries these 5 year old ugly stella m bags anymore?

I don’t get the appeal of Stella bags. Ugly design – and they are pleather (or whatever).
Love the little red Balenciaga. The MCM works nicely.

Some people don’t wear leather for ethical reasons but still want a high quality purse that won’t fall apart in a few months. I like her bags.

I’m thinking of the MCM as an alternative to the Neverfull, I’m just not sure how durable it is.

i agree, Stella bags are uglier in person than in photographs

I love me some Whoopi!! Not a fan of Stella as well

Love Whoopi, love Vivica, still not feeling the Falabella. Nor am I feeling the LV Infrarouge print – where are the Damier Graphite and Eclipse prints?!

I NEED Whoopi’s T-shirt!! I mean, where is the lie?

It feels great to know I’m not the only one thinking this is so true.

I love the Stella Falabella, and especially the really soft ones like the one in slide #6 that Vivica Fox is wearing. The slouchy draped look is the perfect compliment to certain clothes. The fabric they are made from is amazing. I have 2, and my only complaint is that the chain makes the bag heavy. But, what else is new? I have several designer bags that are heavy, but gorgeous! I have learned to carry them on my arm, where they feel okay. I love a variety of handbags, but my favorites include the various canvas LV Speedies, partially because they are so lightweight.

I used to love MCM when it was an authentic German brand.