The Many Bags of Celebs at Milan Fashion Week Spring 2014 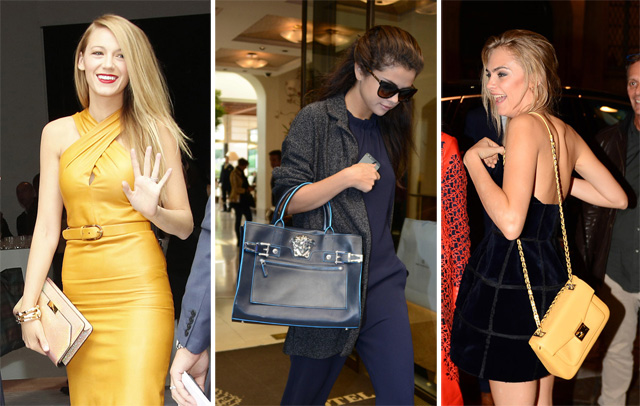 The name “Fashion Week” is so misleading. A quick seven days of fancy clothes and we’re done and can move on, right? Please? NOPE. Fashion already has a warped sense of time (winter coats for sale in June, anyone?), and now we’re done with our third week of Fashion Week, this one in Italy. Milan Fashion Week has come and gone, but as with both New York and London before it, the full story of the event isn’t just what happens inside the shows. There’s a whole world of fashion going on outside as well, and that includes some people of varying levels of fame carrying handbags. Naturally, where there are people carrying bags, we are there to document it. Take a look at the best handbag moments from outside Milan’s Spring 2014 shows.

There’s no other way to start than with patron saint of Milan street style, Anna Dello Russo. The Vogue Nippon editor-at-large is known for wearing some of the most ridiculous runway looks almost exactly as they’re styled for shows, and she finished off this Dolce & Gabbana look with a Dolce & Gabbana Miss Dolce Embroidered Shoulder Bag. Pick up a similar bag for $1,595 via Neiman Marcus. 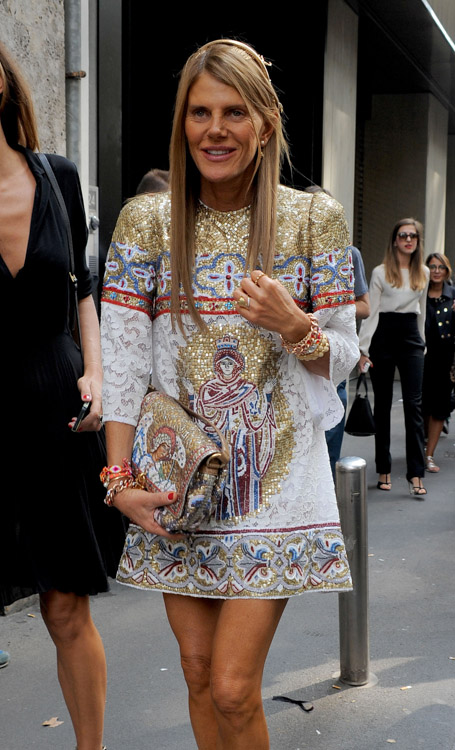 A different day, a different bag for Anna – this time, it’s a Paula Cademartori Faye Tote. Pick up a similar version of the bag for $2,124 via farfetch.com. 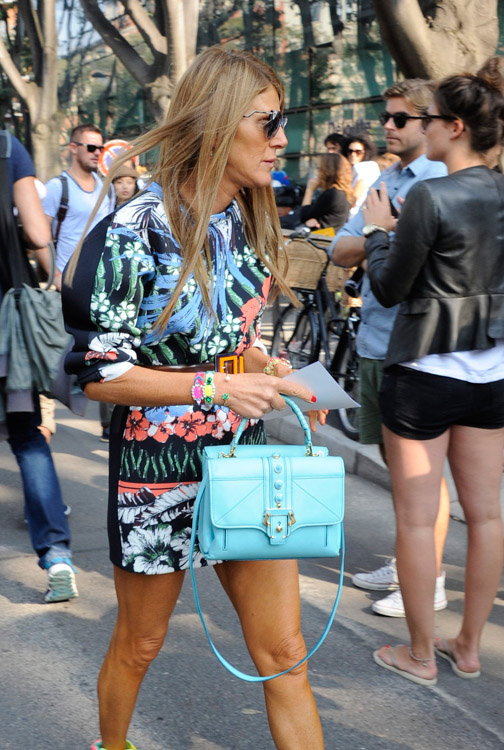 In the running with Dello Russo for the Ridiculous Outfit Award is blogger Chiara Ferragni, who matched an understated Hermes Kelly Bag with…well, whatever is going on circa her head, plus a sash. 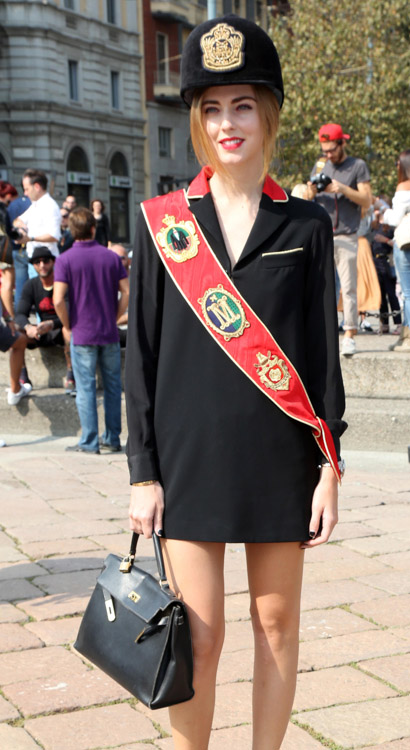 If you look at photos outside of the big international fashion weeks, Israeli TV presenter Hofit Golan can always be found going to shows and is often seated in the front row. No one knows why. Here, she’s carrying a Salvatore Ferragamo Sookie Tote. Buy through Bloomingdale’s for $1,390. 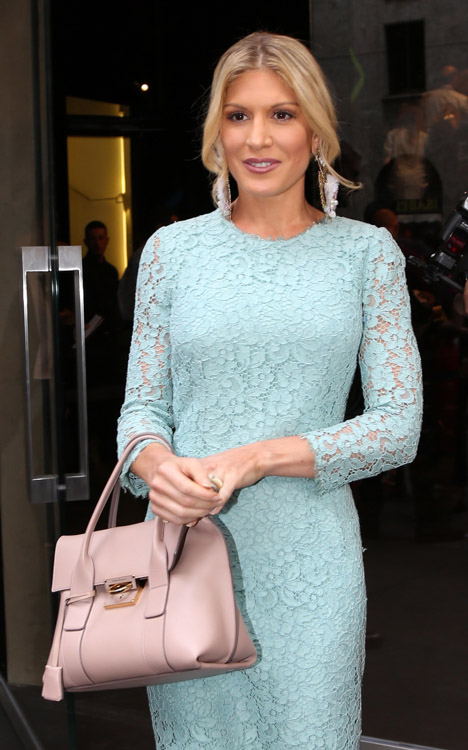 Speaking of confusing attendees…Francesca Eastwood? She of the flaming-fake-Birkin controversy? She was front row at Ferragamo, carrying what is almost surely a Salvatore Ferragamo Box Clutch. Ok, sure, why not. Shop Ferragamo via Neiman Marcus. 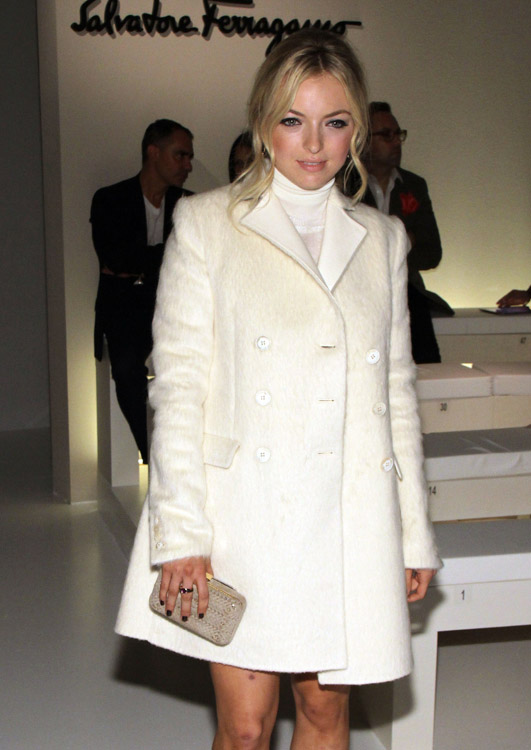 Italian socialite and businessman Lapo Elkann carried this gorgeous Gucci Matte Crocodile Briefcase during the festivities. Feel free to take a moment to drool over it. In Italy, sometimes the dudes win the bag competitions. Get a similar look for a whopping $42,000 via Gucci. 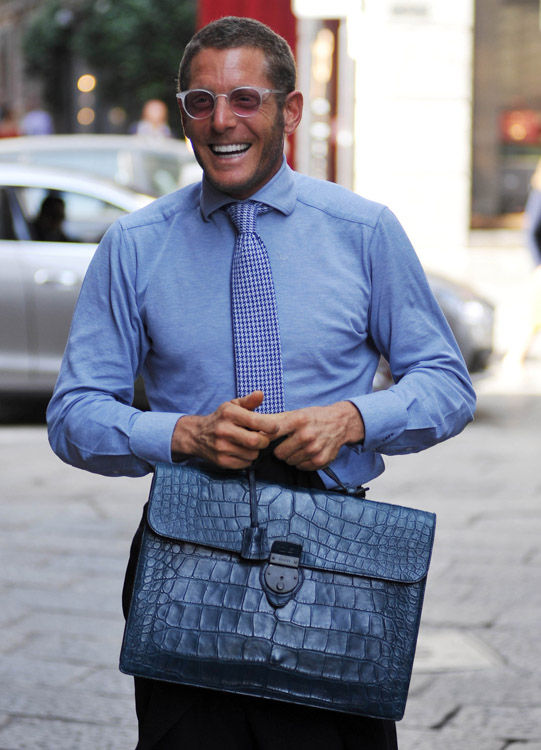 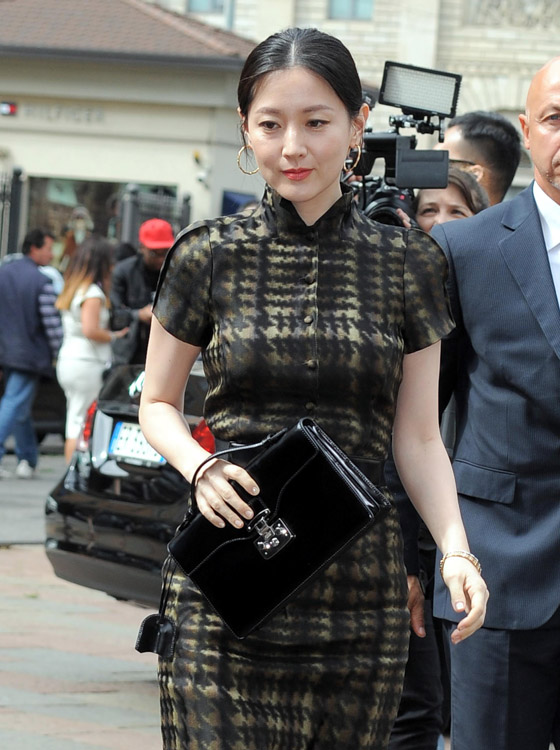 It’s not a real fashion party until someone scurries through carrying an Hermes Birkin and talking hurriedly on her cell phone. This time it was Fiona Swarovski. Yes, she’s on of THOSE Swavoskis. 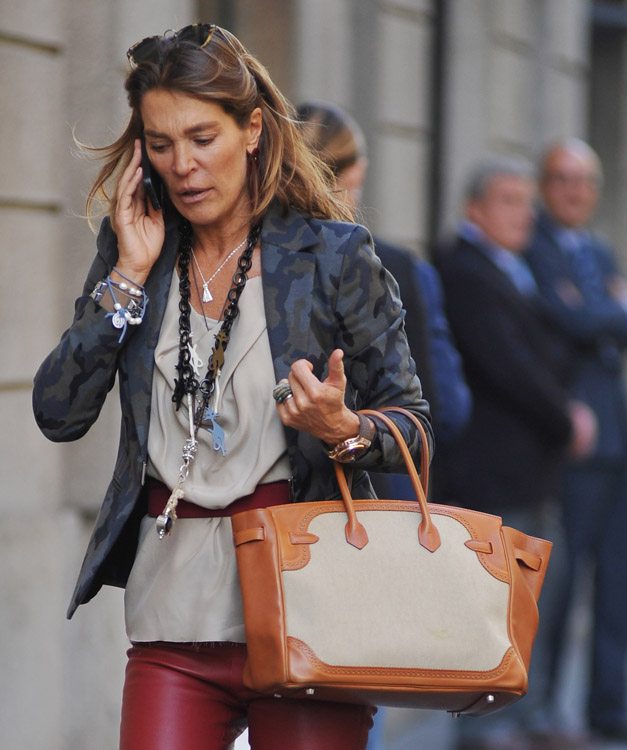 British singer Paloma Faith made a pink splash at the MaxMara show, wearing a monochromatic ensemble that matches the show’s themes, plus a pink MaxMara Flat Clutch from the collection itself. Shop MaxMara via Bloomingdale’s. 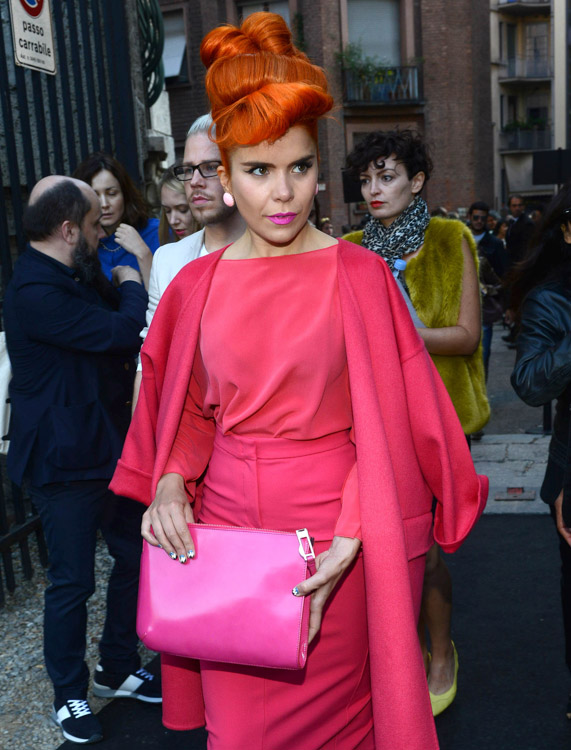 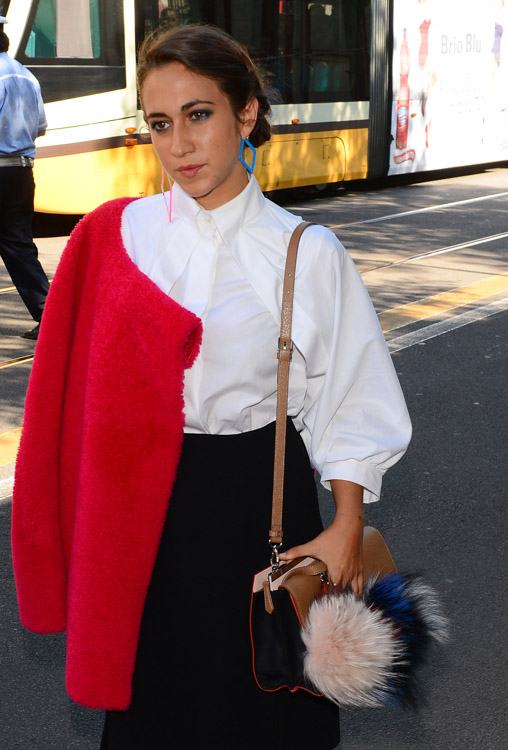 Singaporean singer/actress Fann Wong was also decked out in fur for the Fendi show, including her Fendi Mini Peekaboo Bag. Pick up the white version for $6,900 via Neiman Marcus. 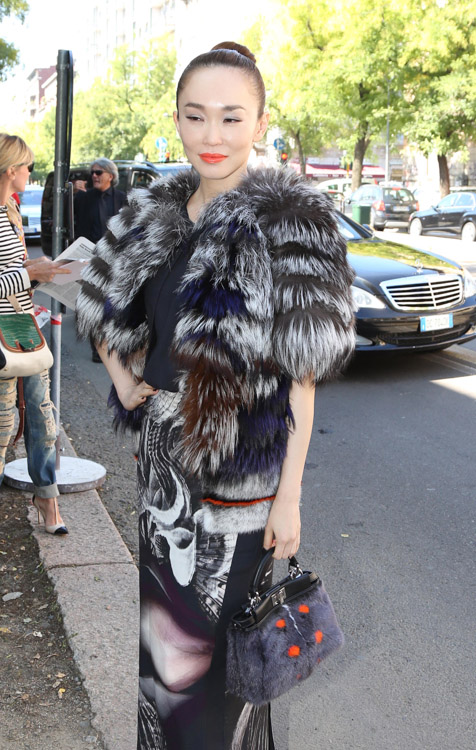 Model of the moment Cara Delevingne rarely carries a handbag, but if someone gave us a gorgeous yellow Fendi 2Jours Tote, we’d probably carry it, too. Pick up a 2Jours in a plethora of colors at Nordstrom for $$2,260. 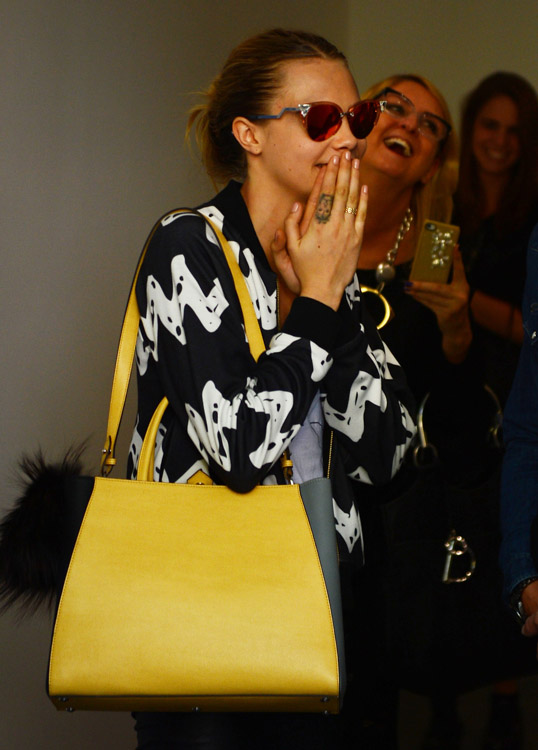 Same goes for Cara and her Fendi Be Baguette Bag, also in yellow. She really cleaned up in the swag department. A black version will set you back $2,950 via Nordstrom. 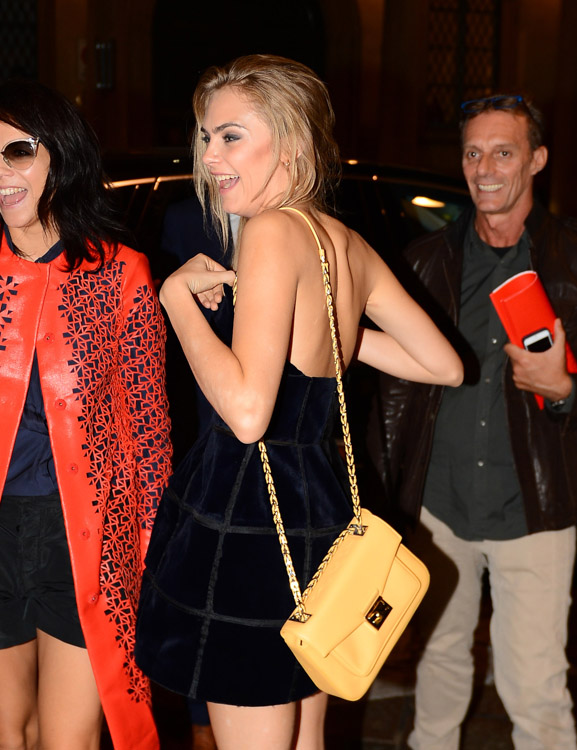 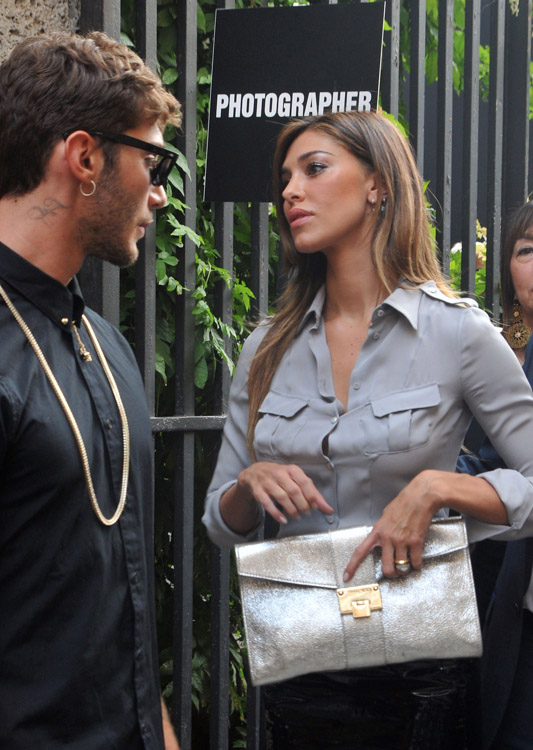 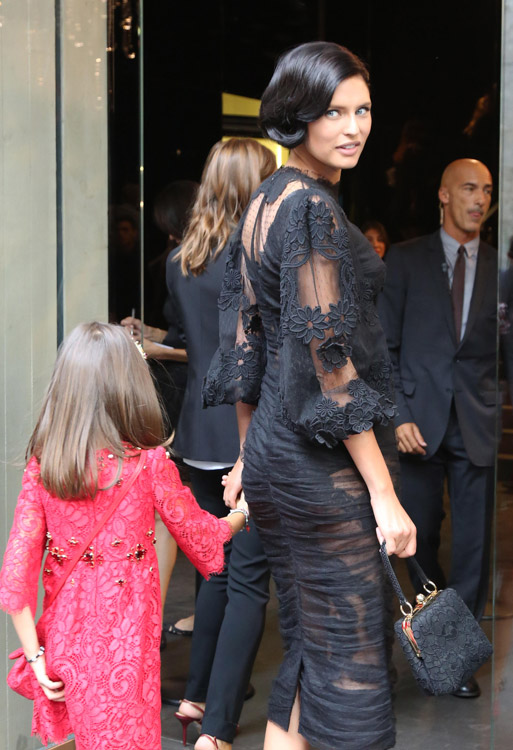 For her part, Blanca Suarez is also embodying the brand who invited her with her printed blazer and Roberto Cavalli Mini Bag. 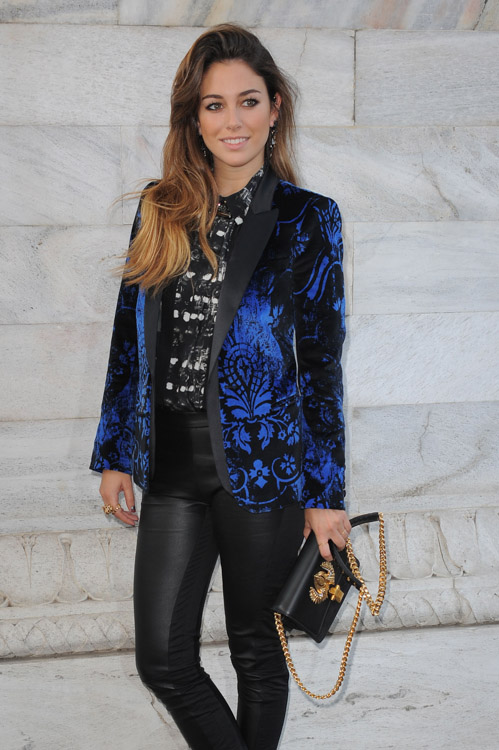 When Selena Gomez attended the Versace show, she did it with this pre-show present, a Versace Medusa Bag, just like the ones the models carried. Gomez also carried it for a meeting with Anna Wintour – is a Vogue cover in her near future? 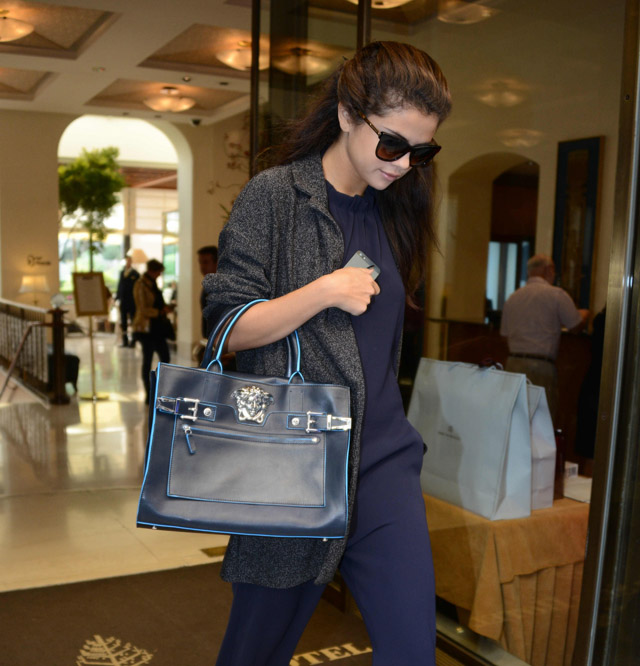 Last but certainly not least, we have Blake Lively, head-to-toe in Gucci leather, including a Gucci Resort 2014 Holographic Clutch. 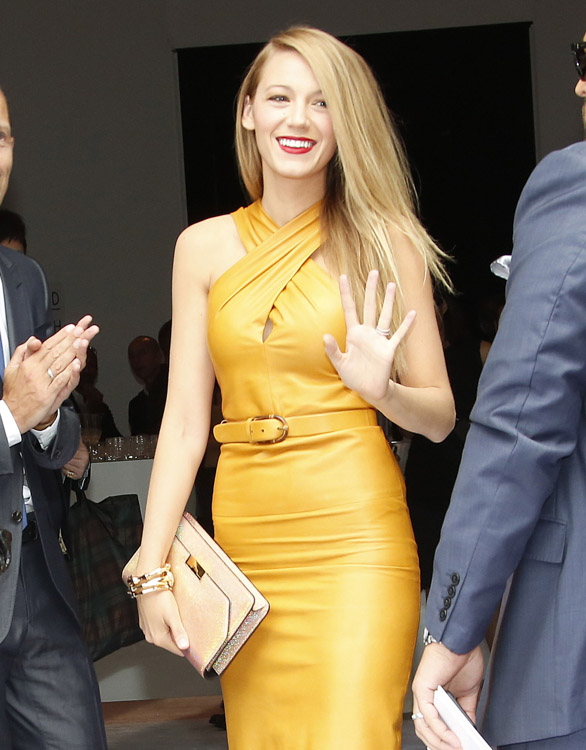 This is definitely a different feel from the NYFW. I’ve been seeing Blake Lively’s picture everywhere and I must say that she deserves it. It’s plain and simple and flaunts everything that is good about her – it makes her look even more like a goddess!

I always find it really interesting to see how the look changes between NY, London, Milan and Paris. Each city has a very distinct fashion vibe to it, even in an increasingly globalized industry.

I definitely love these Italian fashions more than any other.

Some people have more money than sense. A sash? And that hat?

And that Mom should tell her kid not to pick out a wedgie in public. lol

But Selena and Blake hit it out of the park. Gorgeous.

Why is she always in the front row and on the red carpet in the best frocks and accessories? Because her rich secret boyfriend put her there. Duh!