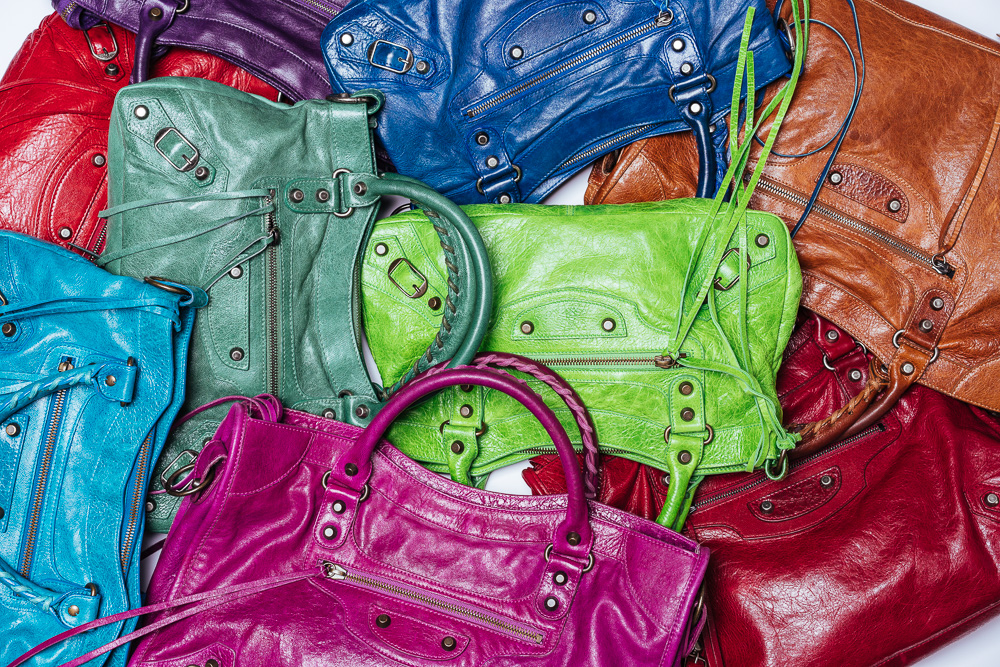 Often when I’ve talked about Balenciaga, the discussion of rare colors and the right season/year/color arises. There is a long thread (dating back to 2006!) on the PurseForum that deals with the rarest Balenciaga bags, which gives great insight into the discussion and reasoning behind which bags are most sought-after.

Today, I have a major treat for you: Vlad and I were able to photograph nine of those most-wanted Bal bags. True Balenciaga aficionados could dissect and discuss which bags they feel are the ultimate Balenciagas for days, so I am sharing these in no particular order–that is easily up for intense discussion and debate. 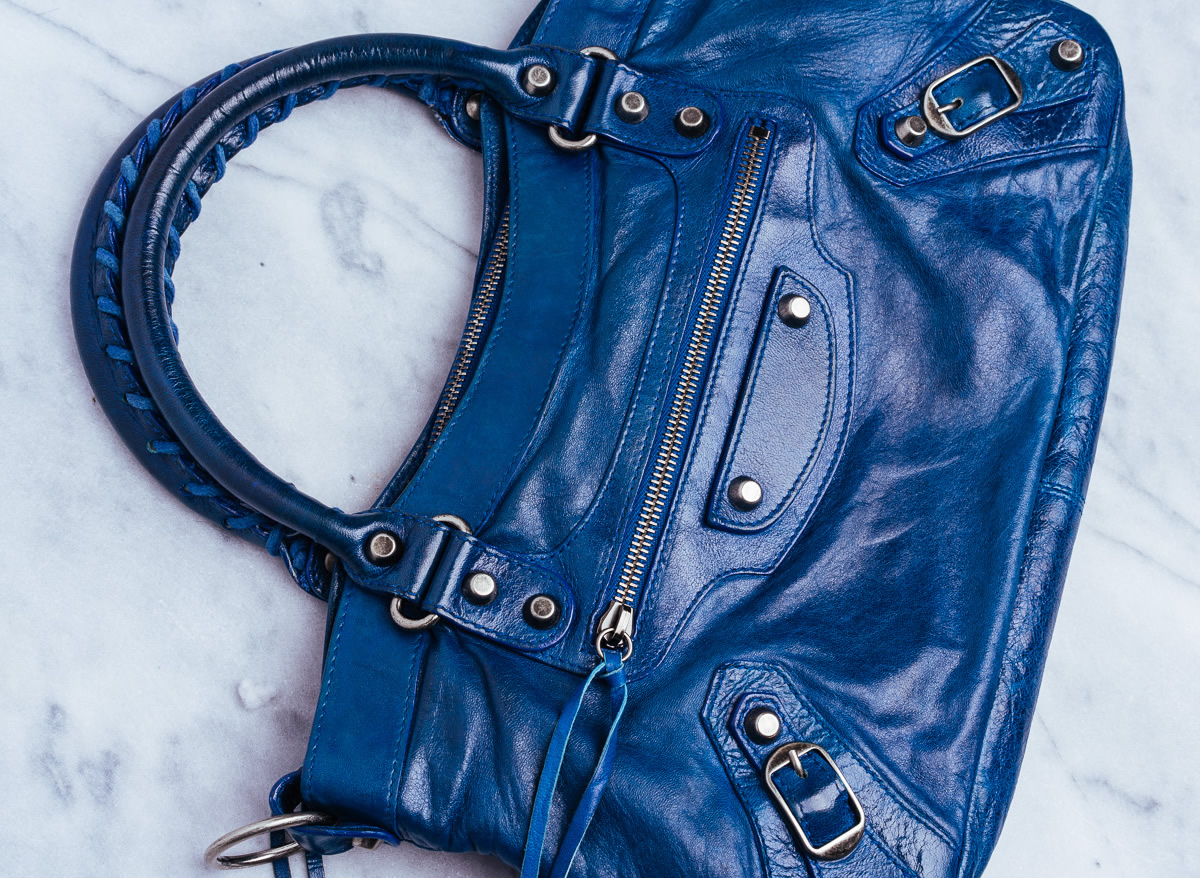 Many would call this bag the #1 Balenciaga unicorn; the color is extremely, extremely rare. While the official name is Dark Turquoise, the brand’s fans often say it should be called Cobalt, Ultramarine, Primary or French Blue–the color is much truer to a Wonder Woman blue than turquoise. This color is known for its amazing saturation, and it’s so rare there’s only a couple of people that I’ve heard of that own it. 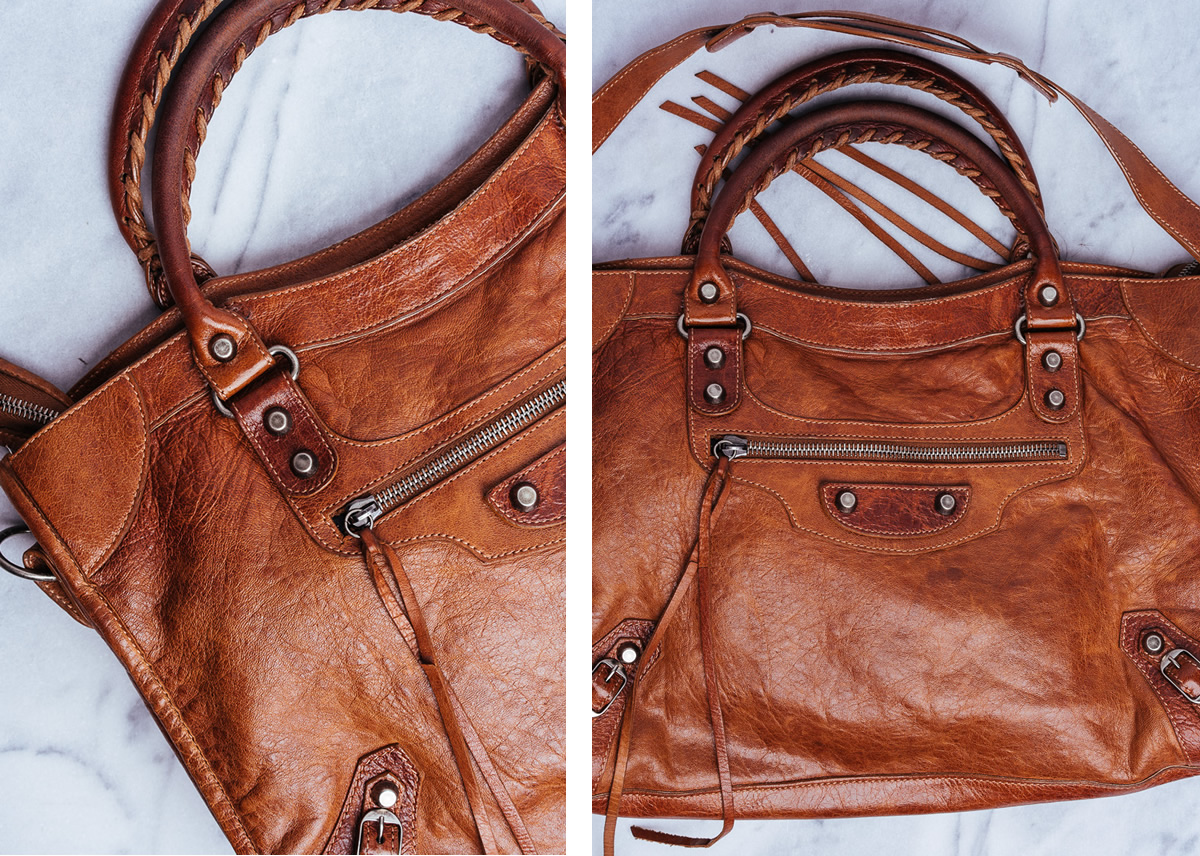 Along with 2004 Grey, this bag is one of the most-desired neutral bags from Balenciaga. There’s been much discussion whether this bag was a SS 2003 bag or FW 2003 bag, but the consensus from well-versed BBag lovers is FW 2003. The pewter hardware stands out against the rich chèvre leather. 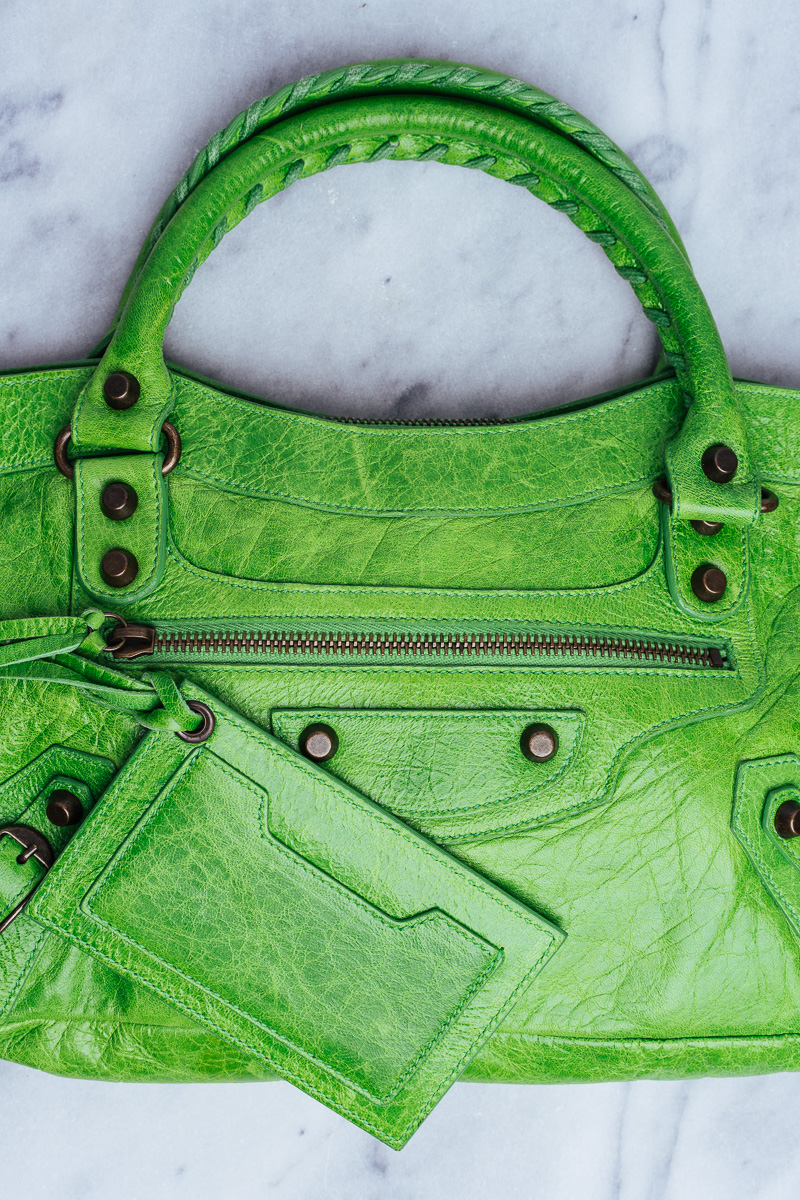 This bag became famous after many celebs were spotted carrying it, including Nicole Richie, Nicky Hilton and Sophia Bush. The leather on the Spring 2005 bags is often described as thick, chewy and divine. There are some Apple Green bags floating around, but it’s very hard to find one in pristine condition, so if you see one, scoop it up right away. 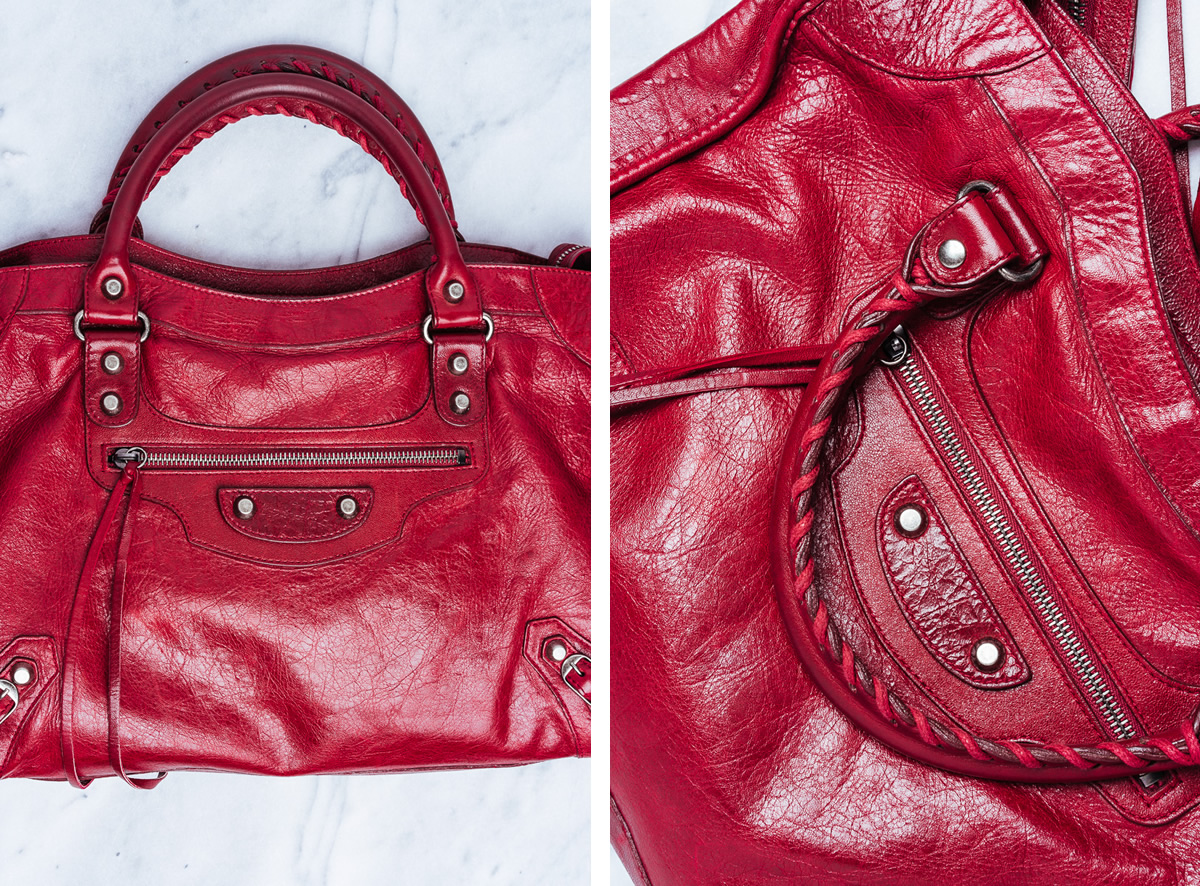 This bag is considered to be one of the Balenciaga Red Unicorns. It’s very hard to find, and many fans think of this bag as the precursor to the beloved Rouge Theater shade from 2005. In the City size, this is arguably the hardest red to find on the resale market. 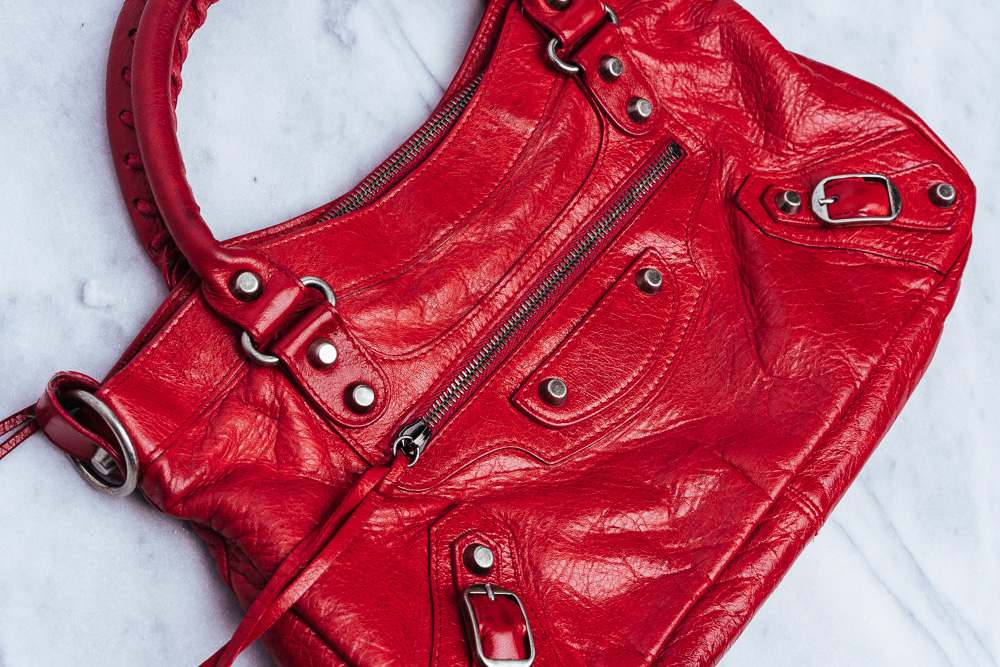 This is another stunning red, and one of the most sought-after Balenciaga red bags ever made, particularly for its Palladium hardware. This is a First bag, but the City in this color and hardware combo is even more rare, and the few that are out there are most likely hidden away. 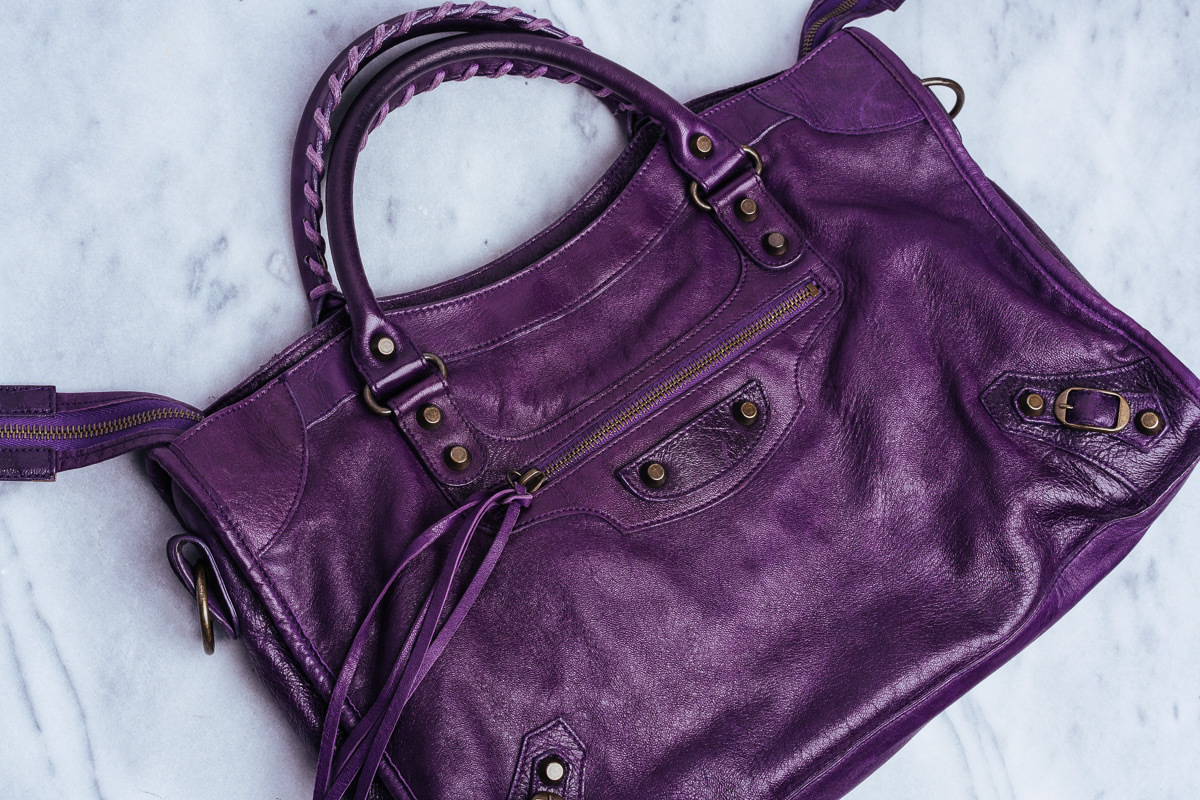 As far as purples go, this is the bag everyone wants. The leather is soft and silky, and it’s the only purple from Balenciaga known to hold its color and not fade. 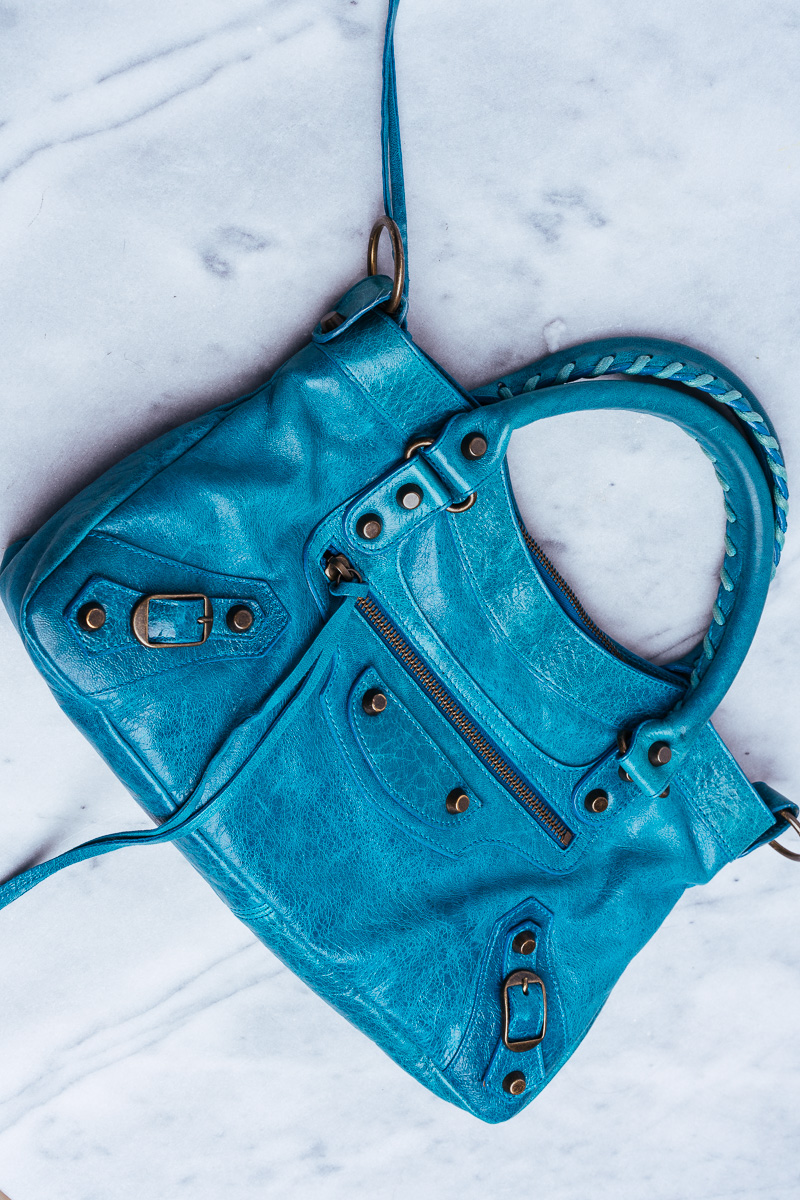 The color of this bag is rich and stunning, which is why so many love it. While this bag isn’t as rare as some of the others on this list, it is one of the most popular colors due to its bright blue leather that resembles the waters of a tropical island. Since this Turquoise from 2005, Balenciaga hasn’t been able to reproduce a bag as intense and saturated in this hue. On top of it, chèvre leather from 2005 is arguably the best leather in Motorcycle Bag history. 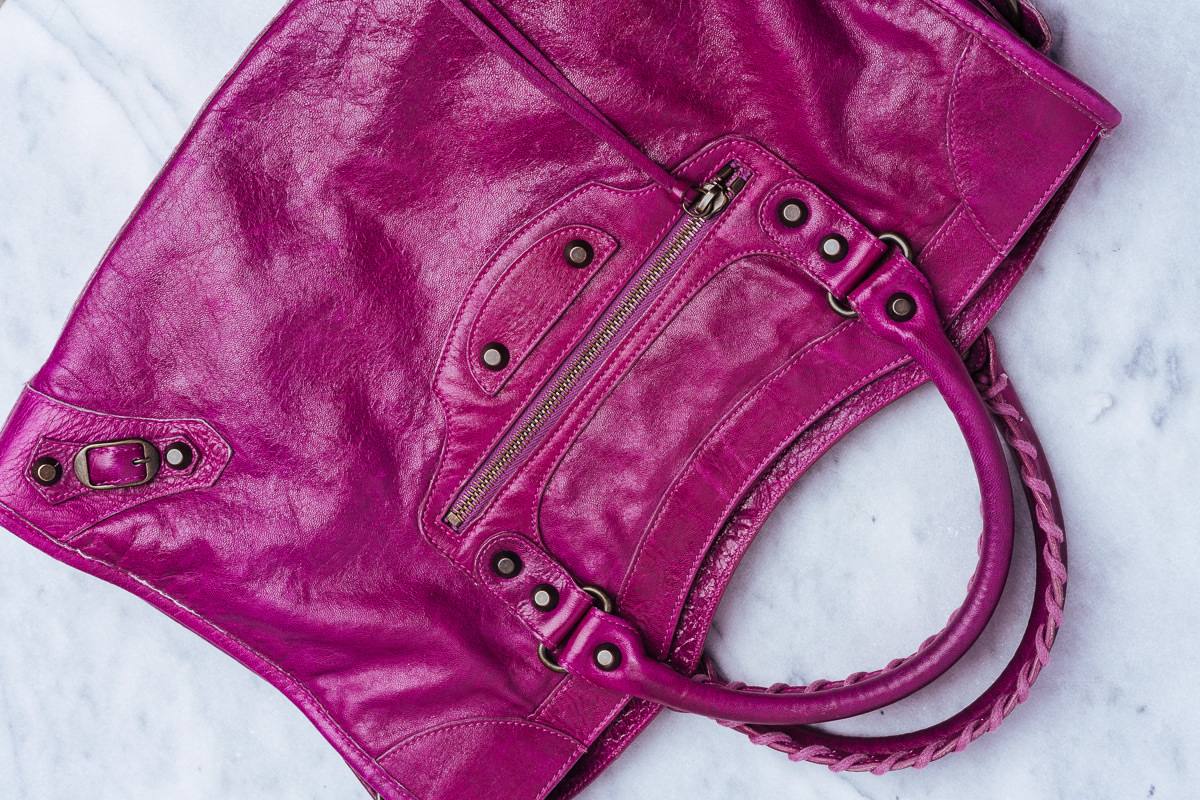 This is another vibrant, celebrity-favorite color that helped put Balenciaga on the map. Magenta 2005 is known to fade, so if you run into one that’s still bright, that’s the best of the best when it comes to this deep, hot pink beauty. 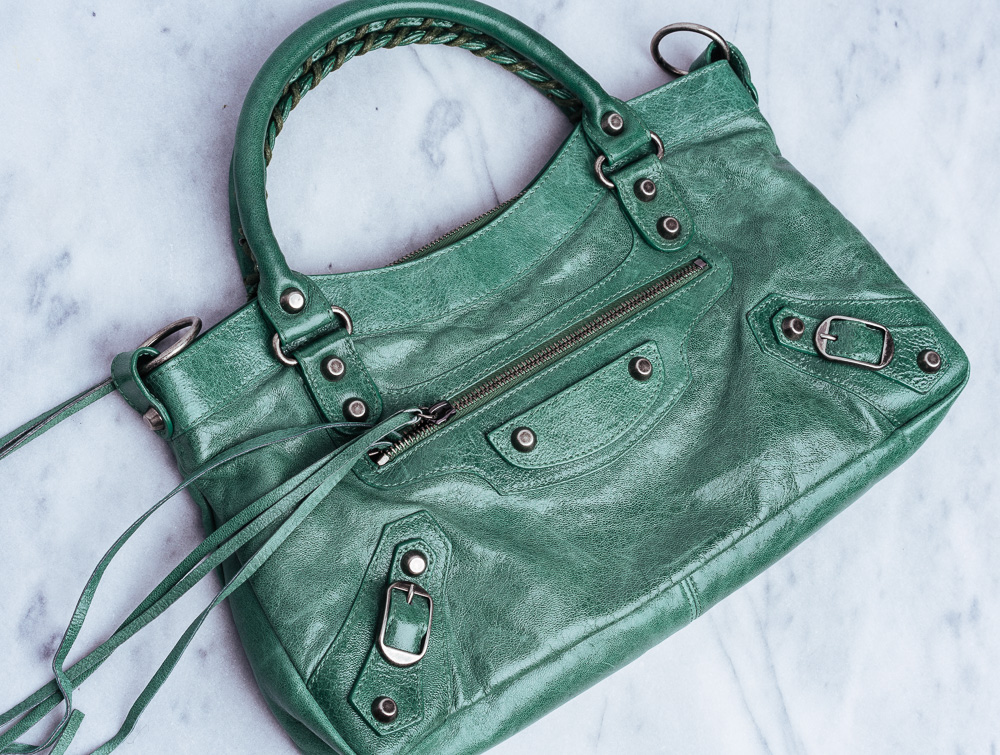 This bag was designed and sold prior to the Balenciaga City Bag, and Spring 2003 was the first season that Balenciaga introduced bright, saturated colors. Previous to this bag, there were red, burgundy, navy and olive bags with flat brass hardware, but they were all pretty dull in color. When Emerald popped up it was bright and spunky; it really started the brand’s color craze.

This exact bag is quite a gem, as it features a long strap that was on the earlier flat brass bags that measures 29″ and sits really nicely when worn. Any of the palladium hardware bags from Spring 2003 are not only rare, but also incredibly sought-after and worth the hunt. Many of these bags need to be sent to the spa for refurbishing, but there are few that float around new with tags. and that is a BBag collector’s dream come true. 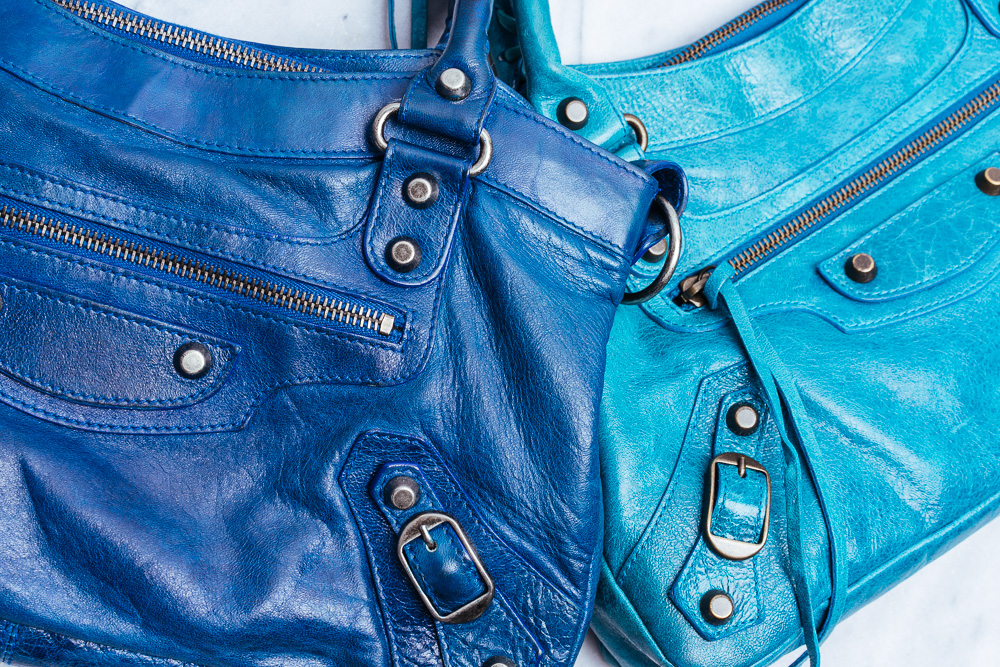 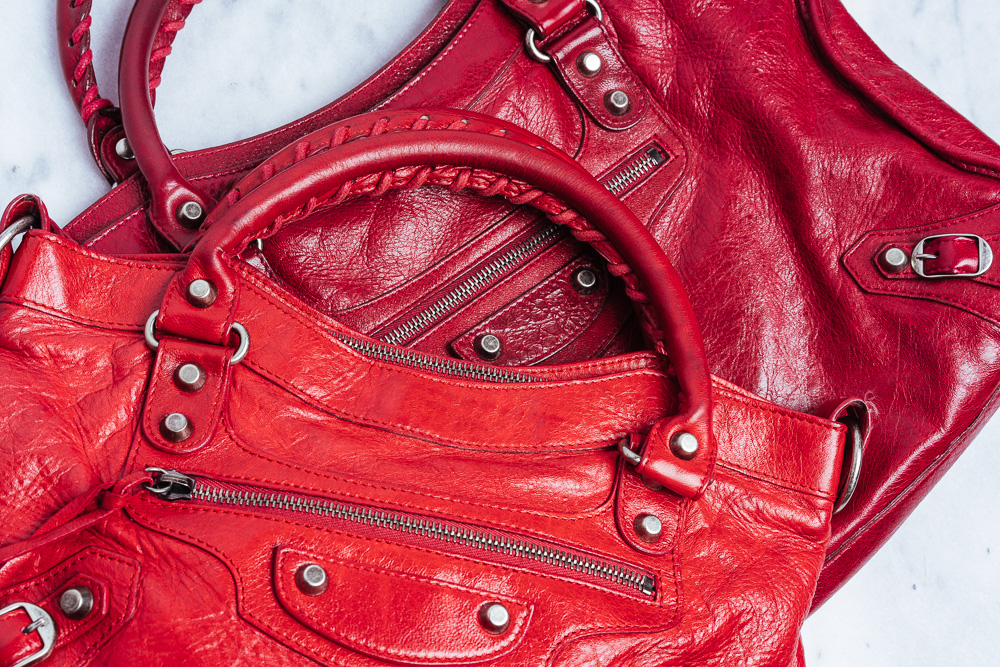 Wowww this takes me back to when I was hunting for my first Balenciaga! I’d scour tpf for people’s opinions on the best leather, best year, best season, best colour, chevre vs agneau and the confusion of seasons when they switched leathers! Thank you for posting this!
Ps, how did you get your hands on all these beauties??

A few collectors were kind enough to let us play with their precious rarities!

And it smells good too. 🙂

I want to reach into my computer and nab that 04 Eggplant!
I scrolled slowly & was able to name all but 2 of the colors.. Didn’t have the years down though. 🙂
It’s a lovely Balicious Rainbow!

You really think so? The leather is probably some of the softest I’ve ever felt – really smooshy and just divine

I agree with you. I have a walk in handbag closet with a nice collection and my Balenciaga bags are some of my favorites. Their leather is AmAzINAg! My other handbag afficianos girlfriends agree with me! Love these bags!

I’ve never seen one in person…so I wasn’t sure if it was stiff or not….

Megs hit the nail on the head when she described the leather as divine! That’s the first time I’ve ever heard that a Balenciaga looks like pleather unless they are referring to the most recent years. Of course each year & season is different, but they truly have the most luxurious, silky and beautiful leather I’ve ever felt, especially compared to SO many other brands out there!! You should definitely try and find an “oldie” to pet! You would then understand the Bal obsession.

Sara is on the mark!

Gorgeous pictures, Vlad! I do think you should have included Rouge Theatre since that is probably the most sought after red (of the oldies anyway).

We are going to try to round up more for great color stories – so reds, blues, greens, blacks, and let them all have their own feature and photograph them with one another to show the difference

Please don’t forget to do PURPLE! If you do single color stories you must include the wonderful world of Bal purples! The gorgeous purple bags are what drew me to Balenciaga. Once here I was hooked. I’m a definite BAG now! Balenciaga Addicted Gal.

Oh, that sounds great! Can I come with you :0)
Btw, you will need to post these in the Bal ref section as a definite colour guide 😉

We are going to work on building out an amazing Bal reference guide! It’s in the works!

OMG! I wonder where you bump into a treasure chest for these! Great post!

Oh wow. I think I have the Dark Caramel – I never knew it was rare! How can I tell for sure what the color is? I assume there have been other “browns” released since?

There have been many browns released since this iconic Dark Caramel as this bag is from 2003. Some of the closest comparisons to this bag are 2008 Saddle and 2009 Automne and there are some other bags like 2007 Sienna, 2006 Camel/ Cognac, 2005 Caramel and so on that would have a similar appearance. If you look on the front inner tag you’ll have your answer 🙂 Or if you post what it says here, I’m sure one of us will be able to identify your bag.

Let me ask some of the BBag super knowledgable peeps!

I got it! Thank got for Purse Forum and all of the people who’ve categorized all the serial numbers! Mine is NOT Dark Caramel. It’s an “R”, which I guess is a 2009 SS, which according to this post (http://forum.purseblog.com/balenciaga-colors-by-season/color-charts-by-year-all-in-one-place-141901.html), means it’s “Automne”. Which is kind of like dark caramel. 🙂

Ahh….the Balenciaga stage. Been there. Done that.

Not sure than any iconic bag is a”stage”. A true collector holds on to a classic. Do I want 5 city bags? (I have to edit, I would take all of these colors, they are gorgeous). definitely keep one of any of my all time favorites. I just carried an old spy bag and enjoyed it like it was the 90’s again!

i agree they are timeless

I REALLY want to like this bag but can’t. I’ve tried them in store but they remind me of cheap vinyl bags from the 70’s. Maybe they’ll grow on me.

I agree. They look like a cross between an Isabella Fiore and a Rebecca Minkoff.

But didn’t they precede both of those designers? They definitely preceded Minkoff. Balenciaga was one of the many designers she has knocked off in her collection.

Yep, preceded both designers. My point being that the Balenciaga bags look as cheaply made and unattractive as the copies that followed.

cheaply made?? no. the craftsmanship on my bbags is amazing. i love the stitching it’s just perfection.

Agree – completely. The look is deceptively casual but the quality is first class – I bought mine back in 2003, and it is the softest most buttery lambskin you’ve ever had the pleasure of squishing !

These photos are out of this world! Great work, everyone!

These photos are amazing.

`I’m` finally` getting 94`Dollars“` an hr,….It’s time to take some action` and you can join it too.It is easy way to get rich`.Three weeks from now you will wish you have started today….

seriously!!! Vlad is so talented!! These photos are TDF!