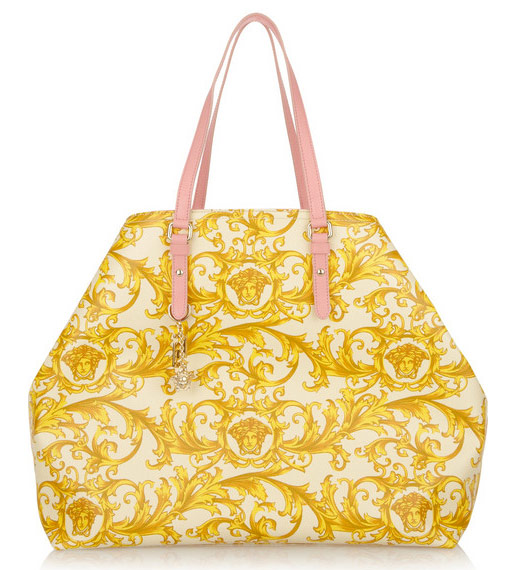 At first, I had no issue with the Versace Baroque Print PVC Tote. The yellow-on-white pattern may not be my personal taste, but it’s the kind of strong, intricate visual for which Versace is known, so I can’t fault them for pursuing that aesthetic. What I CAN fault them for, though, is charging over a thousand dollars for a very basic tote that’s not even real leather.

I don’t like to dogpile criticism on any brand, even Versace, so normally the post from earlier this week about the exceptionally horrid metallic pink bag would have been the last thing I had to say on the matter for a little while. When it comes to bad pricing, though, I just can’t keep my mouth shut and be the bigger person. That much money for a PVC bag is a ripoff of the highest order. (Are you listening, Stella McCartney?)

I don’t care how you market it, PVC is not a high-end material. It’s not even remotely based on anything that appears in nature, manufacturing it is terrible for the environment and some research indicates that it contains carcinogenic chemicals. It’s gross, in addition to usually being a very cheap-looking (and it looks that way because it is cheap) alternative to leather. I understand that Stella McCartney has at least a somewhat reasonable explanation for why she doesn’t use leather, but Versace has no such thing.

Personally, I find this bag’s existence and its price disrespectful to Versace’s loyal customers. They must think you guys are idiots, that’s really the only explanation for charging that much for a basic tote made out of the same stuff as those bags at the cart in the mall. Buy through Net-a-Porter for $1125.

It’s ugly at any price, in any material. I don’t get the pink straps, and the pattern looks like wallpaper from a Vegas hotel in the 1960s.

Absolutely agree. If I say any woman carrying this hideous thing, I would probably whisper the insult, ‘wallpaper-bagger’ or something of the sort!

gee that looks like the bathroom wallpaper of my great-great grandmother..lol the pink handle and the bling is just not right..

I don’t care for it at all. I question if it’s some kind of quasi takeoff on the discontinued “Babylon” bag from LV, but at least that one had many things going for it, unlike this one.

Between this and the other Versace pink bag featured this week, you have to wonder what’s coming next. Some designers are very flamboyant and “cutting edge”, but I think these two examples smell of some designer who’s in a desperate situation and forced to come up with “something different” at any cost, totally missing the mark.

U-gly! And the price is SHAMEFUL!

Thanks for calling out Stella McCartney also. I’ve never understood why her bags cost as much and if not more than leather bags. I appreciate the environmental concerns but there isn’t any reason a PVC bag should cost more than $500 (I think $500 is also too high, but at least in the high end bag world it would be considered a mid-price point).

Pfff, it’s not because your a high end brand you shouldn’t do your best anymore. This would be an it bag in the old people home.

They need to get out of the purse business. Wow, so ugly.

Lately Versace has come up with a couple nice bags….but I agree that is not the norm for them. Their bags are all to often not up to par and way to expensive for what you get. This is one is no exception. Who is going to spend $1125.00 for canvas? Of course, people spend a lot of money for Stella McCartneys faux offerings…go figure.

This bag looks so cheap and the design is hideous!
I’m sorry… Would love some followers, Thanks!