PurseBlog Poll: Are you over studs? 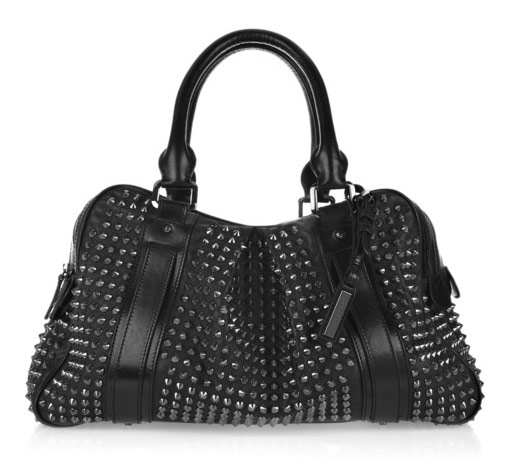 While shoe shopping yesterday, I encountered a sales associate that very much wanted to tell me all about the trends for Fall 2010. I worked retail in college, so I never mind letting someone do their sales spiel without interruption, even if I already know what it’s going to contain. This time, though, I had to stop the poor guy when he got to the part about studs. I’m so over studs. When I told him that, he made a face like I had just kicked his puppy and sounded appalled that I would make such a bold declaration.

I hadn’t given much specific thought to whether or not I still thought studs were cool, but when the sales associate was waving a pyramid-covered combat boot in my face that I had no intention of ever trying on, let alone buying, it became clear – I’m done with them. But is fashion done with the trend, and more importantly, are you? With the appearance of this Burberry Studded Leather Travel Bag on Net-a-Porter yesterday morning, it looks like some retailers hope we’ll buy in to heavy metal for at least a few months longer.

This particular bag isn’t bad, it just looks like it should have come out a year ago. The shape and color of the studs give the bag a nice variable shine from a distance, and it’s fairly neutral, which always plays in a dying trend’s favor. But for a bag that big, it seems like so much metal would make the bag nearly prohibitively heavy to carry. Although if you like your accessories to double as weapons, you could probably beat up a potential mugger with this bag quite effectively. Buy through Net-a-Porter for $2195.