The Roger Vivier RV Shopping Tote is the perfect example of two handbag design principles that I believe to be true. First, that you don’t need to over-design in order to have an interesting bag. The lines of this tote are incredibly sleek, but the precision shows a great deal of care and thought were placed in to them. The leather-covered semi buckles that form the handle attachments are the perfect finishing touch, and the mirror the buckles that Vivier is so famous for in their shoes. It’s not overpowering, but it’s there, and it’s successful as a design element. 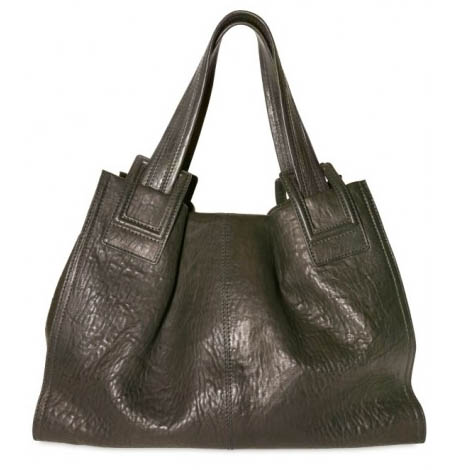 The second principle that this bag demonstrates is that when you have great leather to work with, you don’t need much else. Deciding to cover the hardware with the bag’s material instead of leaving it as metal was a great decision – it gives the bag a continuity that metallic hardware would somewhat diminish. The material used on this bag is amazing – it’s simultaneously matte and a bit shiny, it has a natural texture to it that hasn’t been erased in the tanning process, and the color is somewhere in a middle ground between brown and olive green. With so many basic thing’s working in the its favor, there was no need for the designer to employ any kind of gimmick to make this bag stand out. Buy through Luisa Via Roma for $2118