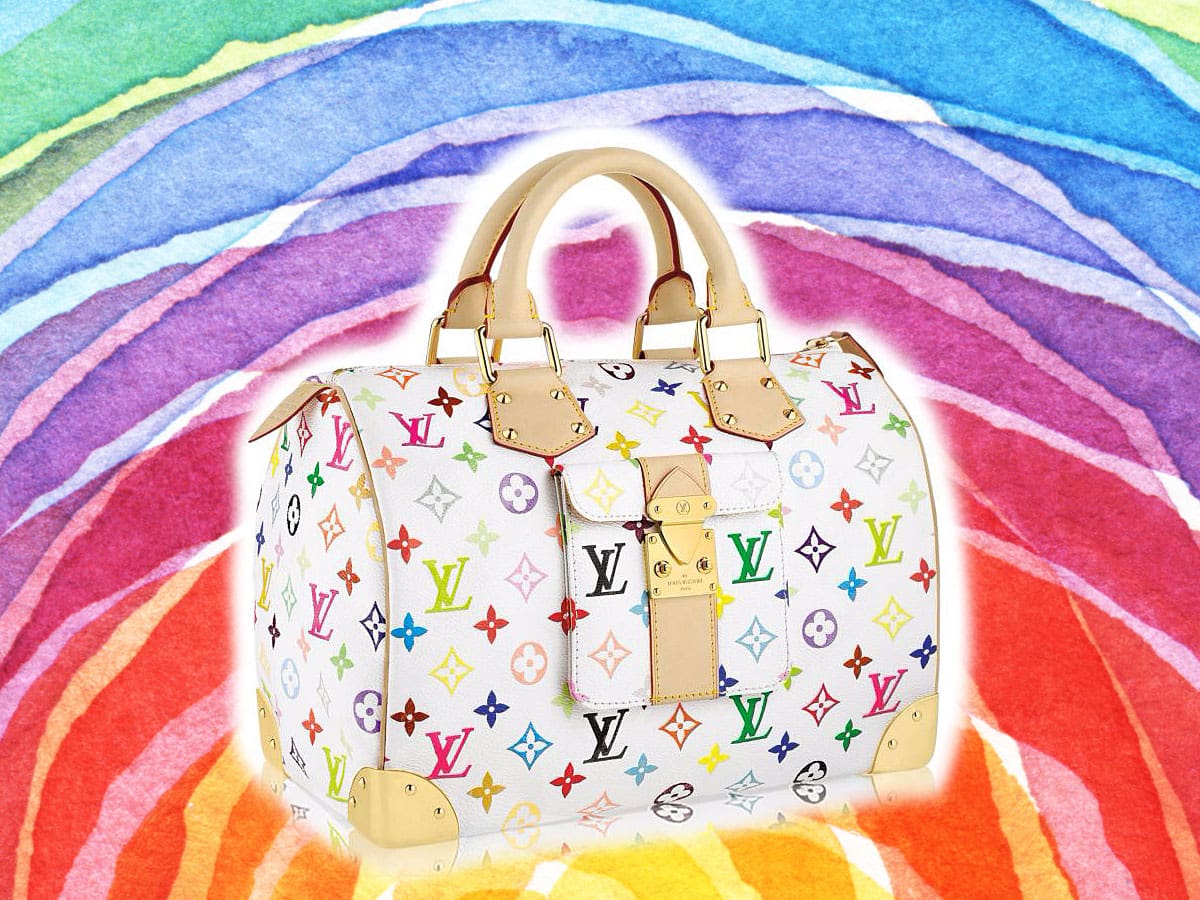 When I reminisce about it-bags of the past, a favorite and frequent pastime of mine, nothing holds a special place in my heart quite like the iconic Louis Vuitton Multicolore Monogram. I think about this print all of the time, and I’ve deemed the Multicolore Monogram Speedy possibly my favorite it-bag in history, a bold statement that I’m willing to make. Although Marc Jacobs was at the helm of Louis Vuitton at the time of the Multicolore monogram release, it was actually Japanese artist Takashi Murakami who designed the bright and colorful monogram print. Multicolored Monogram made its debut on the runway at the Louis Vuitton Spring/Summer 2003 fashion show, and from the moment the line was released it became an instant hit with celebrities and fashion lovers alike. Murakami is the mastermind behind a few Louis Vuitton hits, especially the Cherry Blossom and Monogramouflage lines, but he really knocked it out of the park with Multicolore Monogram. The canvas truly exploded in popularity, remaining one of the most notorious it-bags of all time, reaching its peak popularity in 2003 and 2004.

Lovers of this cheery print had two main color choices, black or white, with pops of colorful monogram on both options. Both colors were beautiful in their own right, but I am especially fond of the white version. There is just something so happy about the bright colors of the Monogram against a white coated canvas. The print was available in a wide variety of Louis Vuitton styles and small leather goods, but my favorite was always the Speedy. The rainbow Monogram is just perfection on the classic silhouette of a Speedy. When I think of Louis Vuitton Multicolore, I can’t help but have flashbacks of Jessica Simpson on her reality TV show, Newlyweds. It seemed that in every scene she had her Multicolore Speedy prominently placed on her arm. I remember admiring it from afar, only dreaming of someday owning one.

Multicolore Monogram was officially discontinued in 2015, and my dreams of ever getting something brand new from the Louis Vuitton store were stolen from me. Despite loving this particular print very much, I do remember being surprised it was still in production in 2015 when PurseBlog broke the news of the prints discontinuation. Multicolore Monogram disappeared from my radar after 2007, so I now wish it had been cut from the Louis Vuitton line up sooner than 2015. Maybe if it had been discontinued earlier, it would resurface in 2019 with all the other it-bags of the past that have been reincarnated recently. One lesson that fashion has taught me is that everything comes back again eventually, so maybe we will see Multicolore Monogram in years to come. Luckily for me, Multicolore Monogram is consistently available on luxury consignment sites, so my dream of owning one is not gone for good.

If you really feel like taking a trip down memory lane, check out this PurseBlog feature on a Multicolore iPod shuffle case from 2006. Nothing like a fashion and technology throwback to really make me feel old.