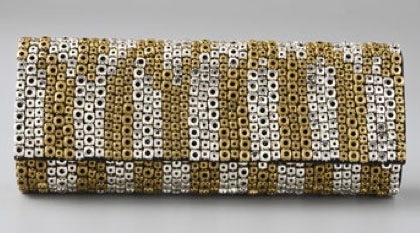 What would the beginning of the holidays be without another awesome, affordable party clutch to ogle? Thanksgiving is the day that officially kicks off the holiday party season, and you can’t go to a party without a fab clutch. Well, you probably could, but you shouldn’t. Instead, you should take the Deepa Gurnani Grommet Clutch.

I really adore what this bag’s got going on, and it’s mostly because of the smart use of the grommets that cover the bag. Gurnani has managed to take something totally industrial and make it almost jewel-like, and the variation in the grommets’ size and color only adds to that effect. The end result is full of shine without being kitschy, and your bag will look unlike anyone else’s at the party. My favorite part, though, is what only you’ll see – the interior is lined in gold python-embossed leather. Buy through ShopBop for $275.