Uh, is that a disembodied head on this Versace bag? 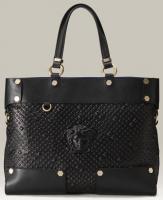 I’ll go ahead and answer my own question: that’s definitely a disembodied head. Is the rest of the body inside the bag? Is this sort of like the medieval stocks, where you’ve got a head poking out on one side and the rest of the body is attached on the other? There are so many questions. I’m so confused. Someone hold me. I think it’s looking at me.

I’m particularly disappointed in the Versace Sculpture Satchel because I’ve actually liked some of Versace‘s bags recently, which is pretty rare for me. They’ve done a pretty decent job stripping away some of the pretense from their designs and some of the prices have been more reasonable, but…a disembodied head? That’s just creepy, no matter whether the Medusa is a Versace signature or not. 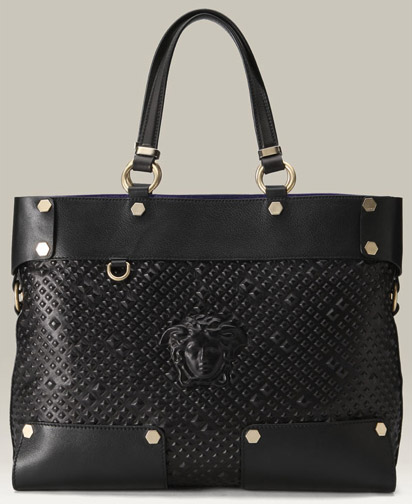 Just because Medusa is something for which Versace is known doesn’t mean that it needs to be slapped on to bags with no context in the design itself. The covered studs are problematic enough (to me, they sort of look like blemishes), but adding what appears to be a decapitated babydoll head right in the middle really puts this bag in a league of its own. And not a good league. I generally like the sleek black leather and the hexagonal studs, but I would scrap the rest of the design and start again. Buy through Nordstrom for $1795.