Coach president Reed Krakoff’s eponymous line has only been around for a few short season, but already I couldn’t wait to see what handbags Reed Krakoff Fall 2011 had in store. The brand’s New York runway show didn’t reveal the entire line, but it revealed enough to assure Krakoff’s nascent fan base that aesthetically, he doesn’t intend to fix what isn’t broken.

The collection’s bags were mostly comprised of neutral leathers of various colors and textures, some of them colliding on the same bag by way of a tan satchel with caramel crocodile accents or or a dove grey handbag with a sandy croc flap. The entirely exotic bags, including a gorgeous black crocodile hobo and a glimmering python satchel, stole most of the show away from simpler offerings, but my personal favorite was the simple leather hobo in bright turquoise with a tonal lizard strap. Thankfully, it’ll also probably be the most wallet-friendly of the offerings as well. 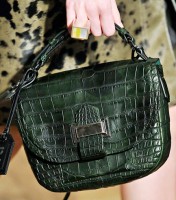 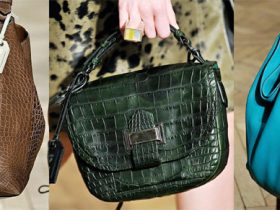