Would you spend more for a leather-lined Proenza Schouler PS1? 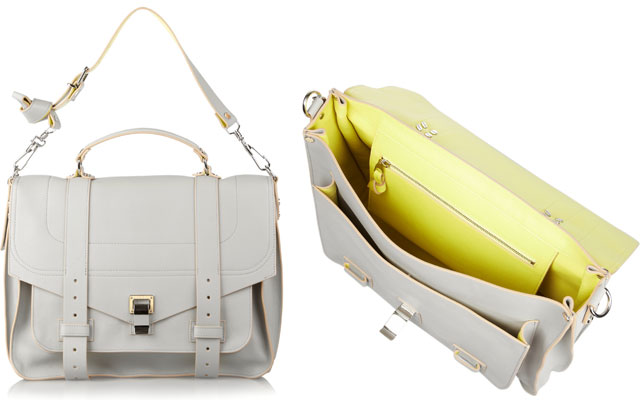 First, I will admit that my thoughts on the Proenza Schouler Large Leather-Lined PS1 are probably more complex than they should be, and definitely more complex than would indicate optimal mental stability. I’ve been carrying a Large PS1 as my everyday bag for a year, though, and in that time, I’ve formed a couple of opinions. (Who, me? Opinions? I know you’re all shocked.)

If you’ve owned a PS1, or even spent any time examining one in a store, you probably understand why the brand initially chose a jacquard textile instead of leather or suede as its default lining. The PS1 has pockets. Pockets on pockets on pockets: a main compartment with a large zipper pocket inside, a front section under the flap with a magnetic snap closure, a huge zipper compartment between the front pouch and the main compartment, and another huge zipper pocket at the back. Pockets mean extra layers of material, and that many pockets means that things can get bulky and heavy quite quickly without a judicious use of textiles. For the original construction, a lightweight woven was the only way to go from a functional standpoint, and it surely helped keep the price for the large at $1,995. Even when the medium PS1 received a $100 price increase (from $1,595 to $1,695) earlier this year, the large didn’t budge.

As you can see above, the introduction of a leather interior means the loss of the two largest zipper pockets, at the front and back exterior of the main compartment. The leather also turns the interior zipper pocket into a smaller, semi-detached pouch. The chartreuse interior is beautiful, of course, as are the ways that the color was carried throughout the design – the underside of the shoulder strap, for example – but I’m not sure it’s worth the functional sacrifice, particularly for the elevated price point of $2,515.

There’s also the question of how the leather affects the bag’s appearance. One of my favorite things about my PS1 has been the bag’s easy slouch; not only does it add to the bag’s downtown-cool look, but it makes the bag comfortable to carry because of its ability to mold to your body. This all-leather PS1, on the other hand, looks like it’s a bag for someone with a more refined, traditional sense of style. That’s neither criticism nor praise; it’s just a different bag for a slightly different consumer. There’s some indication that Proenza intends to spin off new versions of the PS1 in the near future – this redesigned bag, plus a pared-down Proenza Schouler Courier, based on the PS1, which will debut with Pre-Fall 2013. There’s no indication that the old bags are going anywhere, but your PS1 options are about to get a whole lot more diverse. This one’s available now for $2,515 via Net-a-Porter.

Its not leather lined its actually double faced bonded leather…meaning that they bond the back of the skin with another leather. I work in the leather business and actually work with PS. The bonding of the skin is an expensive process so I can see why they will need a price increase. Just wanted to give you a little knowledge about leather 🙂

“…plus a pared-down Proenza Schouler Courier, based on the PS1, which will debut with Pre-Fall 2013.”

I’m curious about these hints that you often drop. I recall a similar little tidbit was featured in an article about Proenza Schouler, and that one teased the PS13. Now, I follow all the big fashion websites (TFS, Vogue, Vogue Paris, WWD) and the blogs as well. Yet, I never heard about these bags until they officially launched. How do you guys get the inside scoop? Being PurseBlog, do you guys have direct contact with the designers?

They need to fix the quality of their bags and their customer service before they worry about the lining and increasing prices. After hearing TPFers complain constantly about things falling off / bags changing color etc, I for one am staying away from PS altogether. Would be interesting for you to read your own forum and do a post about those issues instead of constantly telling us how great they are.