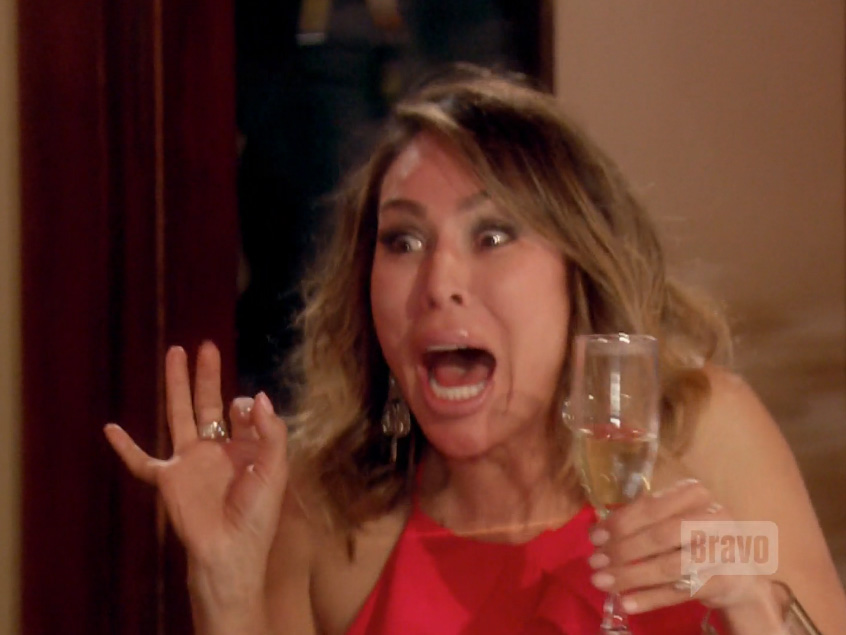 The most interesting Real Housewives episodes have some sort of central question, and last night’s was all about the limitations of reality TV alliances. To what extent can you expect your friends and cast mates to fight your battles? In a contrived setup where everyone has to socialize with everyone else, how involved can anyone expect third parties to become in conflicts that don’t directly concern them? Last night, everyone was dissatisfied with everyone else’s ideas about those questions, and the result was pretty explosive.

The episode began with Kelly heading over to Tamra’s house (with a pretty python Chanel bag) to discuss the argument with Shannon and briefly parody Japanese speaking voices. They also touched on the malevolent brunette party guest, Whatsherface, who implied that Kelly is basically a prostitute (or maybe literally a prostitute, depending on how generous you want to be). Kelly did indeed marry rich, but we found out in the last episode that Whatsherface is freshly divorced from marrying rich, so I’m not sure where she sees the big distinction in their respective methods to financial solvency.

Over at Vicki’s house, she and Briana were having lunch and talking about money. Briana is perhaps the most normal person in the entire constellation of Bravolebrities, and she was worrying aloud about a very normal thing: depleting her family’s entire savings of $50,000 to renovate the home they’re about to move into. Vicki, reminding us all how shocking it is that she has such a well-adjusted daughter, changed the subject to contemplate whether or not she should buy a boat. (Don’t buy a boat. They’re money pits you won’t even use that often.)

The whole point of this episode, of course, was the party at the end and the fight that happened during it, but we had to get through some party-planning machinations to get there. During the last episode, Meghan told Tamra to invite Vicki to the party, but last night, Meghan and her hormones (or maybe just Meghan and her personality) called Tamra to tell her it was rude of her to invite Vicki and she should be uninvited; if Tamra didn’t comply, Meghan planned to stay home and take a nap. Tamra, showing the immense maturity she’s gained during her Real Housewives tenure, somehow managed not to tell Meghan she was being a dramatic, self-contradictory psycho. 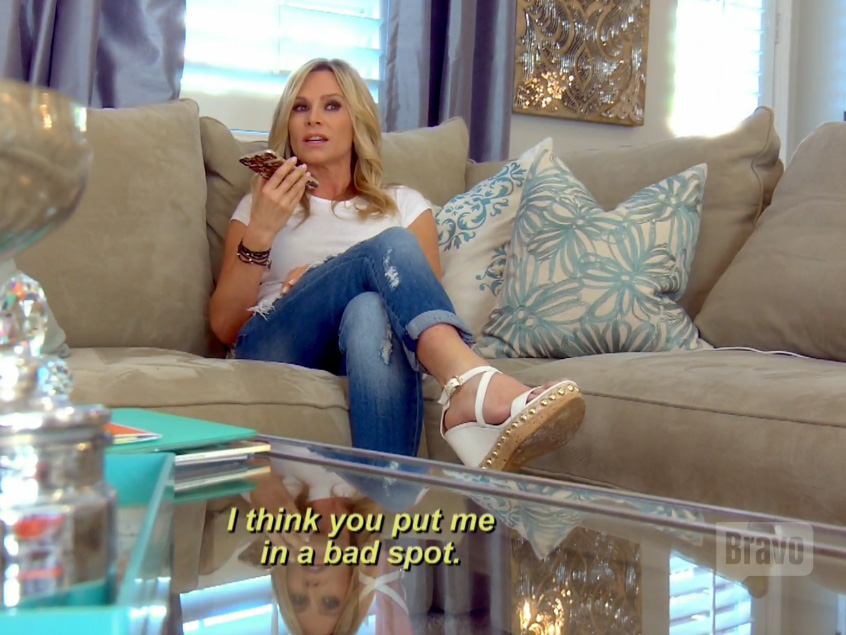 Later, Meghan went to a doctor who seemed to specialize in that thing dads do where they squeeze the pressure points on the sides of your knee while you’re not paying attention in the car. Tamra and Shannon also materialized at this appointment to further discuss the upcoming party, and when it was decided that Vicki’s invite would indeed remain extended, Shannon had a little tantrum about how the alliance was not standing strong in the face of evil. Someone should probably remind Shannon that they’re all contractually obligated to appear on the show together and therefore must occasionally be in the same room with each other, but if anyone did, she would probably just tattle to her husband about it. In the next scene, Shannon became angry with Tamra because of her attempts to remain neutral about the extremely obvious Kelly setup at the 70s party. The alternate title of this episode could have been The One Where Everyone Gets Mad At Tamra For No Reason.

Meanwhile, Vicki went to Kelly’s house to work on her own alliance and, in the process, failed to operate both a residential elevator and a plastic pepper mill. Vicki’s support doesn’t make Kelly look all that great, but it’s necessary to have cast mates partner up for these types of pre-fight conversations, and Kelly is new and no one else wants to partner with Vicki. Thus, they got together to eat a poorly cooked meal and listen to Kelly talk about defamation and suing Whatsherface for spreading lies, which was a theme throughout the episode. For what it’s worth, it’s almost impossible to win a court case for defamation when you’re a public figure, as reality stars are, but that wouldn’t necessarily stop Kelly from filing the suit and draining Whatsherface’s bank account with lawyer fees in the process.

They made them leave their shoes outside the room at the Japanese restaurant, and if I were Tamra, I’d have been a little nervous another diner might grab my Louboutins on the way by and have visions of Carrie Bradshaw’s lost Manolos dancing in my head. Kelly, as is her way, had the same thought and voiced that fear out loud to an employee. As Tamra later pointed out in the episode, she was Kelly in a recently past life, and those two interactions back to back really drove that point home, in retrospect. I’m not sure whether Tamra would say Real Housewives was a vehicle for her own personal growth, but I hope it can be for Kelly’s.

The first sign of contention at the party was at the mention of Tamra’s psychic friend, who predicted last season that Brooks’s whole cancer thing was a scam. Someone at the table mentioned wanting him to do readings for the group, which momentarily filled me with much hope and excitement because of its potential similarities with one of the greatest moments in the entire Real Housewives canon: Allison DuBois the Vaping Psychic on Real Housewives of Beverly Hills. I know you can’t recreate an iconic event in pop cultural history like that, but damn, I’d like to see them give it a try. 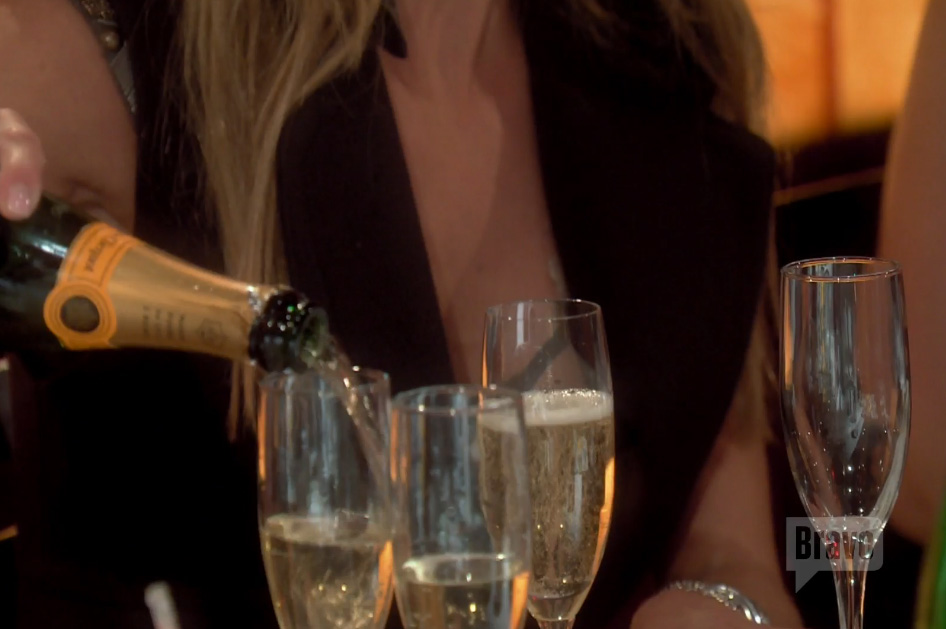 The fuse for the night’s blowup (on top of a bunch of alcohol, which should always be implied at these gatherings) was Meghan asking Kelly how her lunch with Shannon had gone, which is such an obvious way to start a fight that it almost seemed like a producer sent Meghan in with explicit instructions to bring it up. After first insisting it was just fine, Kelly launched into a partially nonsensical drunken rant about her educational background and sex work, called Shannon a C U Next Tuesday and then called Tamra one too when she interjected to remind her that people who run their mouths should expect the same in return. Kelly mentions her anger issues a lot, and although we’ve certainly seen her get mad before, it was in situations where other people were also ready to fight. Last night, Kelly flipped out basically all on her own.

Kelly wasn’t the only person who lost it, though–she was just the first. After Kelly freaked out at Shannon and Tamra, Heather climbed out from under the sit-in-the-floor traditional table and lost her mind. It was an outburst nearly as bizarre as Kelly’s, especially when you consider how important it seems to Heather to always look controlled and put together. She even tried to kick Kelly out of the party, which didn’t work because Heather was not among the party’s hosts and therefore lacked bouncing privileges. When that effort failed, she kicked herself out of the party and sobbed on the phone to her husband all the way home. It was the kind of meltdown you have when there are other things you actually want to be freaking out about, but because Heather works hard to seem serene and satisfied with life, who knows what the bigger motivation actually was? If nothing else, I’m glad she threw a “you’re not really sorry and we all know it but whatever that’s fine” at Vicki on the way out the door.

After Heather left, Tamra went about the diplomatic work of calming everyone down, which is when she mentioned to Shannon how much of her old, unhappily married self she sees in Kelly. Tamra’s explanation of her own angry outbursts in previous seasons made sense, and her old situation sounds not all that different than Kelly’s current one, especially when you remember that Kelly’s husband put enormous financial pressure on her to stop her from divorcing him. If I were Kelly, I’d probably be unpredictably furious in inappropriate directions too. Shannon wasn’t buying it, of course, but Shannon loves nothing more than to feel personally aggrieved by someone’s behavior.

While that was going on, Kelly did the thing that people will explosive anger problems often do: she calmed down quickly and expected everything to be fine. She apologized for the profanity like of course that was a ridiculous thing to do, and then got right back to drinking, making fun (I’m sorry, “impersonating”) Heather in the process. Tamra tried to dissuade Kelly from doing that without getting too involved, and although that was the prudent thing to do, playing the fence likely won’t be a safe position for her (or anyone else) too much longer.