Keeping Up With The Kardashians: “Everyone’s gonna wear white. Just like a spa. Or an insane asylum.” 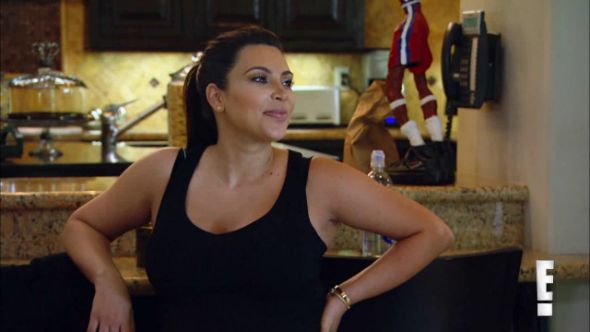 Have you noticed there hasn’t been a single repeat of Keeping Up With The Kardashians since the season began? I was almost certain they’d roll one out this past weekend because we all needed a break after that epic Greece three parter, but no. A recapper’s work is never done. Not only was there a new episode, it was stuffed to the gills with things that resembled actual drama!

First up, let’s address the obvious fluff piece portion of the episode before we move on to meatier fare. It was Khloe’s and Lamar’s 4th anniversary, and Khloe was planning something extra special. (SPOILER: it’s gonna involve LATEX.) It seems like only yesterday, Khloe and Lamar’s wedding was splashed all over the front page of every gossip rag in the nation. Four years later, and the only person in this relationship that’s getting any tabloid coverage is Lamar’s secret mistress, who I don’t think actually exists.

Meanwhile, preparations were being made for Kim and Kanye’s new digs at Casa de Jenner. Kris seems to continue to suffer under the delusion that Kim and Kanye will move in with her after the baby comes, but I don’t think that ever actually happened. Kanye is a bazillionaire, he doesn’t need to crash with his faux in-laws. Even so, there was a ridiculous amount of redecorating going on. Kendall and Kylie were not crazy about the idea of three new life forms moving into their cozy Calabasas digs, and they were even less crazy about the constant influx of people traipsing through the house 24/7. Things became even more unappealing when Kris declared she was putting the house on lockdown for the first 40 days of new babydom, in order to create a totally zen environment for the Kimye spawn.

That particular stroke of Kris Jenner genius gave Kendall the idea that she should bounce a little early from the old homestead, now that it was basically becoming an upscale hostel for the insanely rich and famous. Kendall is very nearly 18, and it’s almost time for her to spread her wings and flap away as North West threatens to push her out of the nest.

Kendall and Kylie weren’t the only ones who are unhappy about this situation. Once a baby pink Vespa magically appeared in Bruce Jenner’s garage, Bruce officially started getting pissed. Kris clearly didn’t ask Bruce before inviting Kim, Kanye and baby, which isn’t at all surprising. That’s three quarters of the Jenner family that don’t want to roomshare with Kim and Kanye. Three quarters of the family whose opinions count for almost nought!

But there was a silver lining for Bruce…of sorts. As you probably remember from last week’s episode, the Jenner boys were really gung-ho about giving Bruce a putting green. Everyone knows this is totally gonna be a thing between Kris and Bruce, and yet, the ball keeps rolling. The siblings and step-siblings had a final meeting of the minds to make sure everyone is on board for Bruce’s putting green, because it takes this much pre-planning to circumvent a complete Kris Jenner meltdown. (We still won’t completely avoid one, of course. For obvious reasons.) The green was supposed to be a surprise of sorts, even though Bruce had essentially plotted out the whole thing himself.

Back at the Kardashian-Odom household, Khloe’s latex jumpsuit had just been delivered. Khloe was surprised to find that wearing a latex jumpsuit is akin to being trapped in a giant condom. She squeaked around in it just long enough to lose confidence in her sexy photoshoot idea, and also just long enough for Rob to snap a quick pic on his phone on the sly. (Weird.) Of course he sent it to Kim, who was terribly bemused by Khloe’s anniversary plans. This is why you don’t discuss sexy boudoir stuff with your siblings. (Or maybe you do? Again, I don’t have sisters.)

Khloe’s sexy photo shoot day finally came, and she wasn’t feeling really sexy, but she showed up anyways. To Khloe’s credit, her ass looked amazing in latex. It morphed into this big, shiny black orb that may or may not unveil all the deeply shrouded mysteries of the universe, like a perfect pair of Magic 8 balls. (I want to note that when I say “big”, I mean comparative to the rest of her. Khloe has slimmed down a lot this year, and yet she still has a perfectly sculpted booty. It’s perplexing.) All in all, the day was a great success, and Lamar now has some stimulating new black and white portraits to hang in the bedroom. Unfortunately, the episode went down hill from here quite quickly.

After some intense deliberation, Kris decided Kendall and Kylie would get their beach rental after all. Kris, in an effort to keep her nearly 18-year-old daughter from experiencing true freedom until she can do so legally, rented out a place in Malibu for the whole fam. So yes, now Kim, Kanye, and baby are (theoretically) moving in, and Bruce, Kris, Kendall, and Kylie are moving out. This all makes tons of sense! Also, I’m still confused about what happened with Bruce’s Malibu rental from the beginning of the season. Is it really that easy to get out of a rental contract in Malibu?

Still unbeknownst to Kris, Operation: Bruce’s Tiny White Balls was well underway, and Kim was taking her mom to Paris for the explicit purpose of getting her mom out of the house while the green was being installed. (Cue 5 minutes of grainy, yet still aesthetically pleasing, footage of Paris.) Bruce was competing in some charity golf tournament, so he was also MIA in order to create the illusion that he had nothing to do with all of this. (I suppose?)

Of course, once the fam had signed on for the beach rental, everyone was creating a “The Gift of the Magi”-type situation. Kris had already moved the fam to the beach for the summer, and now the kids were putting Bruce’s putting green in at what will essentially be Kim and Kanye’s temp digs. It was just like the classic O. Henry story, except no one had to sell their hair to a wig shop and about a dozen more people were involved.

When Bruce returned from his weekend golf getaway, he was not at all stoked about the beach house, understandably, because he had absolutely nothing to do with it, and his new putting green was going to be all the way back in Calabasas. He tried to 86 the putting green plan, but the ball was already rolling. Even so, Bruce and the kids scrambled to cover up any evidence that there might have ever been a putting green in the backyard before Kris got home, but to no avail.

Kris was upset that nobody told her about the putting green, even though that was kind of everyone’s plan from the get-go. She insisted that she’d given Bruce everything he’d ever wanted in life. (I assume she’s talking about Kylie and Kendall, because we’ve seen the Jenner home. The only part of it that’s distinctly “Bruce” is the shelf with all the tiny model helicopters in the garage.) She was certain Bruce was portraying her as some sort of Disney villain to his kids, which is a constant font of embarrassment for her. Bruce lamented that he was losing any modicum of control he ever had in his marriage. It was an incredibly uncomfortable convo to have in front of half your kids and a bunch of hired help. What was truly, abysmally stupid, however, is that there was no new putting green to speak of any more, so it was all a big to-do over some new grass, and the idea of a putting green, really. END SCENE.

The will-they/won’t-they divorce factor on this show is really wearing on me. Bruce and Kris can eat each other alive at this point, I don’t care. I mean, it would be conceptually horrifying and promoted on E! for a full three months, but guys, you have my blessing. Chow down!

Other episode house-keeping notes and fun conversational tidbits from this episode:

Bag-spotting: Of course Kylie has her own Celine Phantom Luggage Tote. Of course she does.

Kris on the Kimye baby invasion: “Everyone’s gonna wear white. Just like a spa. Or an insane asylum.”

Kim threatening Khloe: “You have to tell me or I’m gonna Instagram this.”

Khloe to a puppy: “Bernard, do not eat my pillow secretly!”

The Kardashians tend to spend a lot of time in novelty stores. Has anyone else noticed this?

Brandon Jenner: You are one of the most reasonable people on this show, by a lot. But please don’t ever wear your hair in a tight little bun again. It makes you look like a handsy yogi.

You know who we don’t see enough on this show? Khloe and Lamar’s dog Bernard. He’s totally charming. Give this dog a spin-off, stat! “Bernard Humps Miami.” “Bernard and Rob Hump New York.”