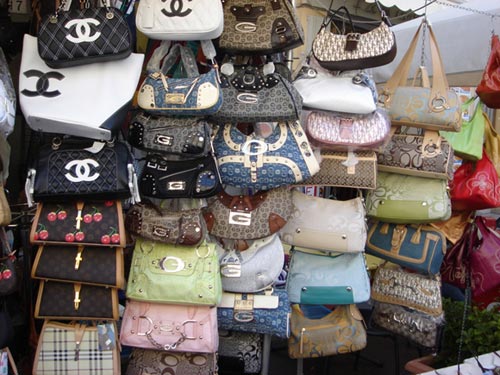 File this under “Things That Really Shouldn’t Surprise Anyone, Ever.”

According to Massachusetts Institute of Technology researcher Renee Richardson Gosline (yeah, that’s right, MIT is interested in your handbag), consumers are far more likely to identify a counterfeit bag as real when worn by someone that “looks” rich and a real bag as counterfeit when worn by someone that “looks” poor. I’m not sure why that would come as a huge surprise to anyone, but the fact that its been scientifically confirmed means that we can all congratulate ourselves on being logical, I suppose..

Before you fire up the keyboard and claim in the comments that you don’t care if people think your bag is fake or that it’s shallow for people to assume things about you because you dress a certain way, please slow your roll and read the stuff after the jump.

Inherent in fashion is the desire to create a cohesive personal style and public image, and if we weren’t expecting for it to matter in some way how we portray ourselves to the world, then we’d just all wear sweatpants and Ugg boots like we all really want to, deep down (or maybe I’m projecting). And it’s okay! Caring about public perception is actually a very grown-up thing to do, no matter how many times you told your mom that you didn’t care what people thought of you as a teenager.

As it turns out, the efforts that we make on behalf of our egos are perceived pretty accurately, which is to say that people with money usually do a good job looking like they have money, and others are more likely to assume that the bags of wealthy-looking people are real. On the other hand, most people think a bag is fake if the other contextual clues in the wearer’s appearance don’t project wealth.

The most relevant conclusion of the study for people that love authentic bags is that buying a counterfeits, by itself, isn’t fooling anyone. Carrying a fake bag (one which many people might perceive as expensive in another context) isn’t enough to override everything else about someone’s appearance – instead of making the person look rich by proximity, it just makes everyone think that the bag they’re carrying is fake. That means that the people out there that bought a fake Louis Vuitton and have no other personal style to speak of wasted their money, and most people are able to accurately surmise that their bag isn’t the real thing. As it turns out, you really can’t make a silk purse out of a sow’s ear, as they say.

Bloomberg really managed to bury the lede on this article, though. All of the previous stuff seems fairly logical, but what I found most interesting was this little statistic, nestled at the end: Of women that buy counterfeit bags, 46% go on to buy the real thing within two years. People that buy fakes may think that they have one over on the rest of us bag-buying fools, but as it turns out, a lot of them are just at the beginning of a fashion progression that will ultimately turn them into the high-dollar consumers that they thought they could fool with a pleather Gucci.