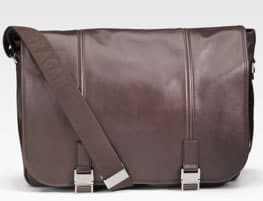 In our past two Gossip Girl discussions, we’ve had at least one poster ask about the messenger that Dan sports in the series – it’s vintage-looking, non-bulky, and actually pretty chic (for a manbag). And truth be told, I have no idea what it is or where it came from. Even on an enormous website like Zappos that carries hundreds of brands, only a handful of results appear when looking for a brown leather messenger (and most of them are for women). Perhaps society is trying to discourage our male counterparts from sporting man purses, or maybe brown just isn’t a big color for men this season. Honestly, I have no idea – I didn’t expect my search to be nearly so futile. I did find one bag that I thought Mr. Dan Humphrey might like, even though it’s obviously not the one that he has in the series: the Salvatore Ferragamo Nomad Messenger Bag. Its details are understated, its leather looks worn and saddle-like, and the silver buckles are just simple enough to not make you question the wearer’s sexuality (not that a manbag should make you do that in the first place). Brooklyn-dwelling teenager Dan would have to sell his sister Jenny into white slavery to afford it, though: it’s a bit steep, but buy through Saks for $1,900.