Even though much of the handbag world seems to find Christian Louboutin’s non-shoe accessories hit or miss, every now and then he comes out with a bag that you absolutely can’t miss because not only is it adorable, but every retailer in the known universe ordered it in three colors. This season, it’s the Christian Louboutin Bikini Watersnake Clutch, which comes lovely, dusty shades of cerulean, turquoise and fuchsia, which you see above.

The only problem, naturally, is that the Louboutin clutch costs a thousand dollars. For those who would rather go the faux-snakeskin route (or who would rather have a similar clutch in a neutral instead of a bright), check out the MaxMara Embossed Evening Clutch for less than half the price of the Louboutin bag. Sure, MaxMara calls it embossed lizard, but I think we all know faux python when we see it. 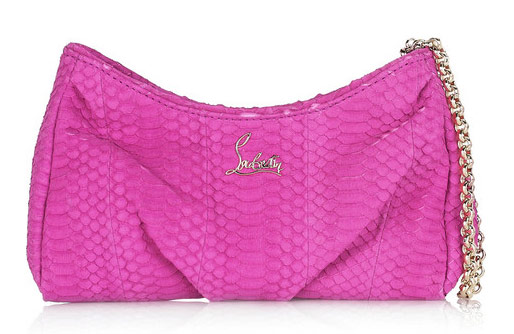 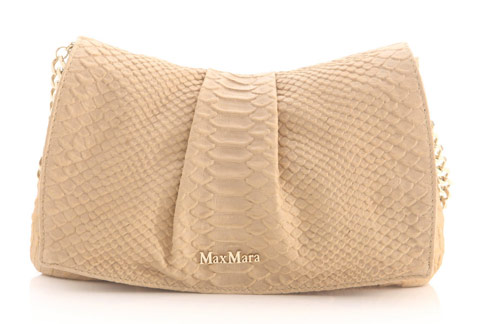 The Louboutin clutch definitely wins on color and material, but I think I prefer the structure of the MaxMara bag better. The chain just isn’t for your wrist; instead, it functions as a true shoulder strap or is entirely removable. And instead of a zippered opening like the Louboutin, MaxMara’s bag has a flap, which makes it more of a viable option for dressy events. Either way, though, you’re getting a cute, useable bag that will look current for seasons to come. Buy the Christian Louboutin through Net-a-Porter for $995, or the MaxMara through Matches UK for $486.

So, a few days ago, this blog called Kristin Cavallari out for carrying what may or may not have been a Balenciaga inspired clutch, but they are featuring a MaxMara clutch that looks eerily similar to a Louboutin one? That seems like hypocrisy.

I guess the difference to many is what bag seems totally inspired by versus very similar – but that is a personal opinion in many cases and we all will not disagree.

To be honest, we like to give a similar look for less – it leaves options when some things are not affordable. 🙂

I like having the “look for less” options. And I don’t think that the CL bag necessarily inspired the MM. CL isn’t really known for this Bikini Clutch, is it?

Megs, I love the vibrant color of the CL clutch but the MaxMara is way more attainable. I always appreciate the “look for less”!

Love the color of the CL clutch, but I like the style and look of the Max Mara one more.

Ooo very nice cheaper option! I actually prefer the MM as it will have longer staying power than a brighter version.

I actually prefer the Max Mara. Love that flap and the removable. chain strap.

I defiantly prefer the CL. Love the style and colour.

Defintely the MM! Love the classic colour and shape better.

Nice looking bags, but I think the blatant labels cheapen the look. There is a way of displaying the brand without being In-Your-Face. I might buy one of these bags based on the style, but the ostentatious label, in gold no less, turns me off completely. Monsieur Louboutin, not that you, of all people, will give a rat’s, since your $500-$4,000 shoes fly off the shelves, why slap your label the way it is on your bags? It’s like Louboutin wants to display his bags at Target.

Lovely bags! Not such a lovely price tag though!