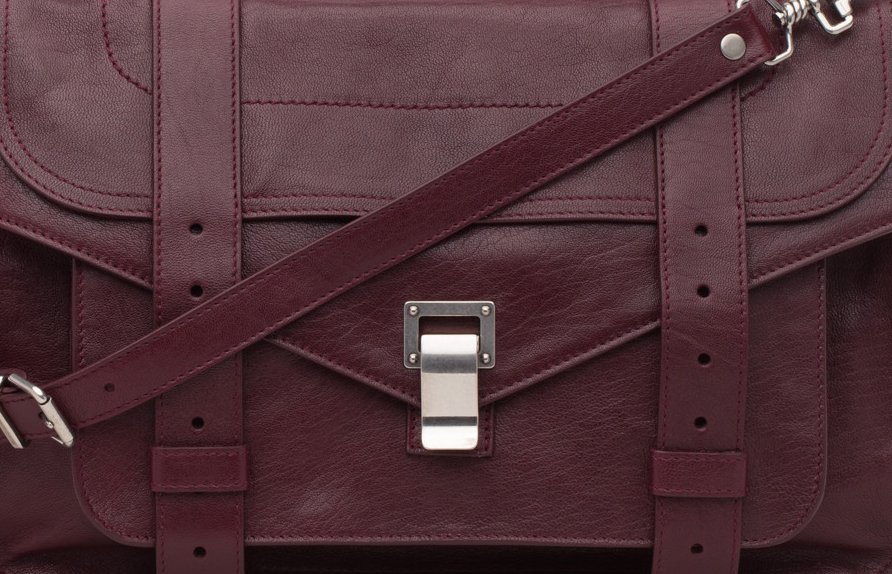 We spend plenty of time around here talking about three categories of bags: classics, It Bags and trendy seasonal options. There’s a fourth category, though, that deserves an enormous amount of credit: the workhorses. They captivate customers and fill closets for seasons on end, mostly without the credit they deserve.

You can probably already name one or two of these bags off the top of your head. They never quite reached true It Bag heights of popularity and they’re not old enough to have become iconic classics yet, but they all have one important thing in common: bag lovers really, really enjoy carrying them because they’re great bags.

Below, we’ve assembled the beginnings of a Workhorse Hall of Fame. Nominate your own inductees in the comments.

The Pashli arrived at a perfect time: shoppers were freaking out over the Céline Luggage Tote, and the Pashli provided a flared-gusset option that was more easily accessible in both price and availability. It’s been a premium-contemporary favorite ever since. 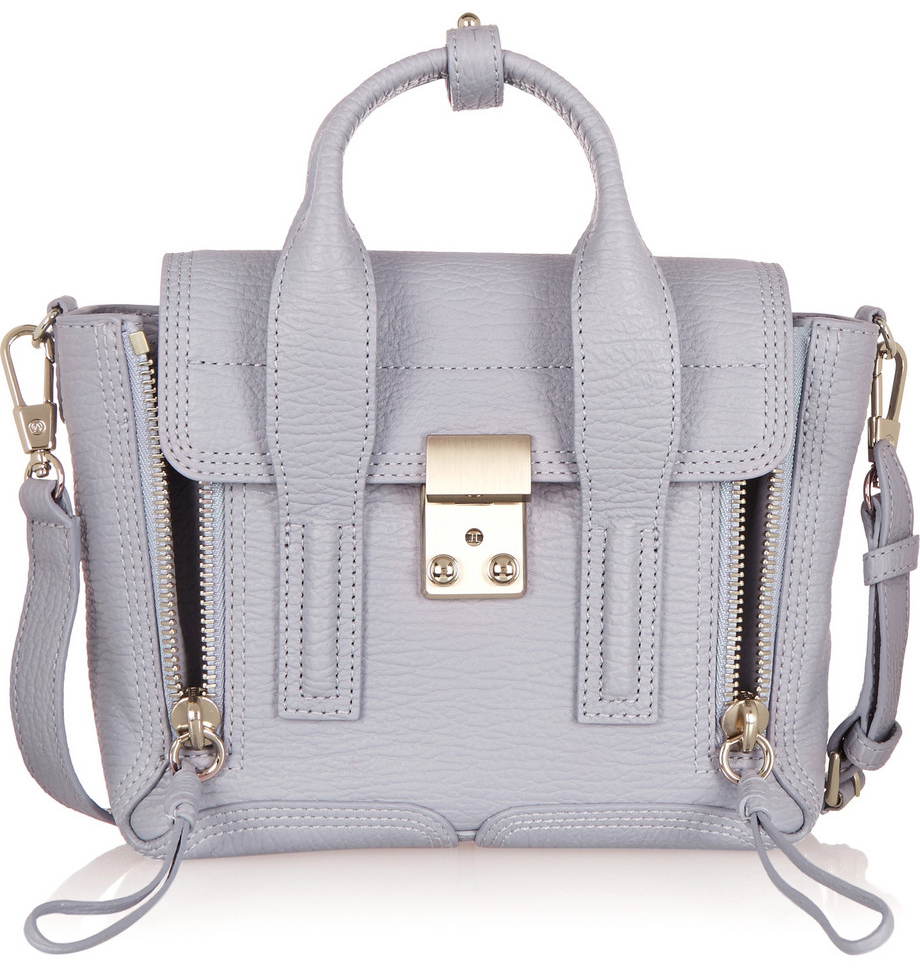 First came the Rocco, and just when consumer clamor for it started to cool, the little-sister Rockie made its debut. Over the years, it’s managed to become a wardrobe mainstay of girls looking to get the downtown-cool look that Alexander Wang has built a brand upon. 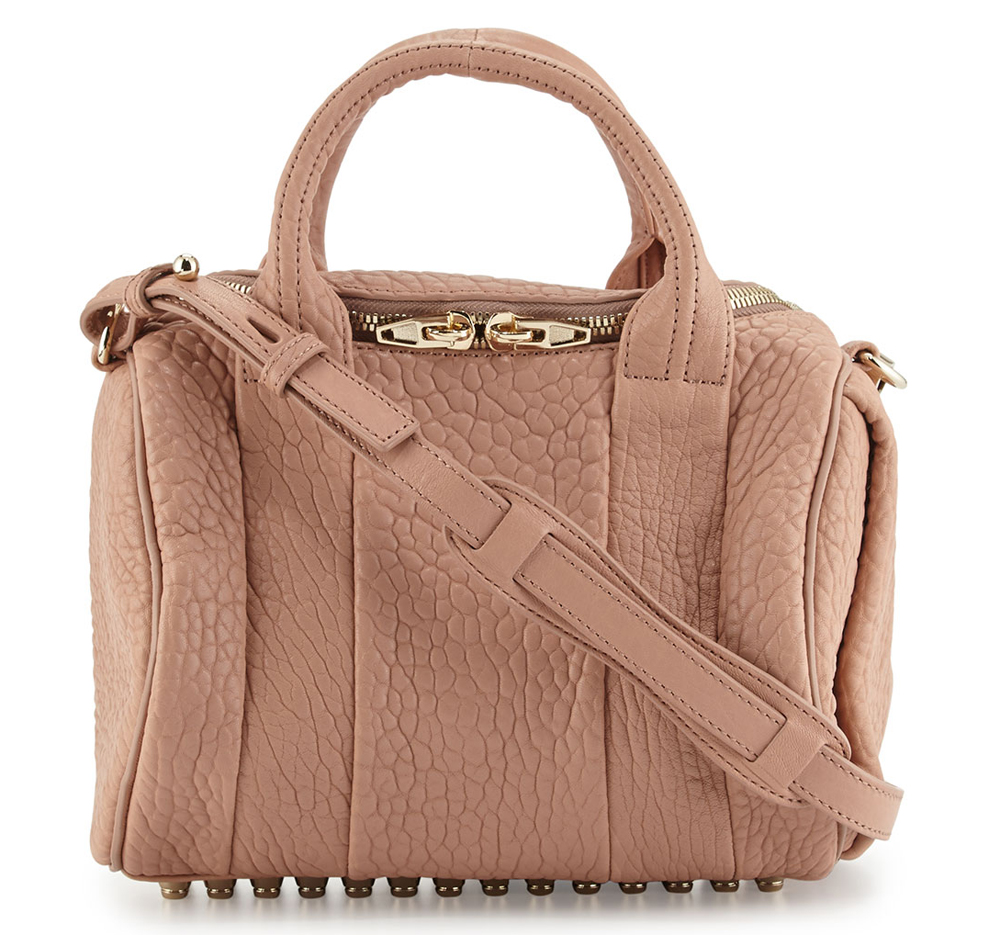 Chloé‘s popular bags always have unusually long staying power, and although the Marcie never reached the heights of the Paddington, it’s been a solid favorite in both satchel and shoulder bag versions for seemingly as long as I’ve been writing about bags. (Okay, not quite that long, but almost.) 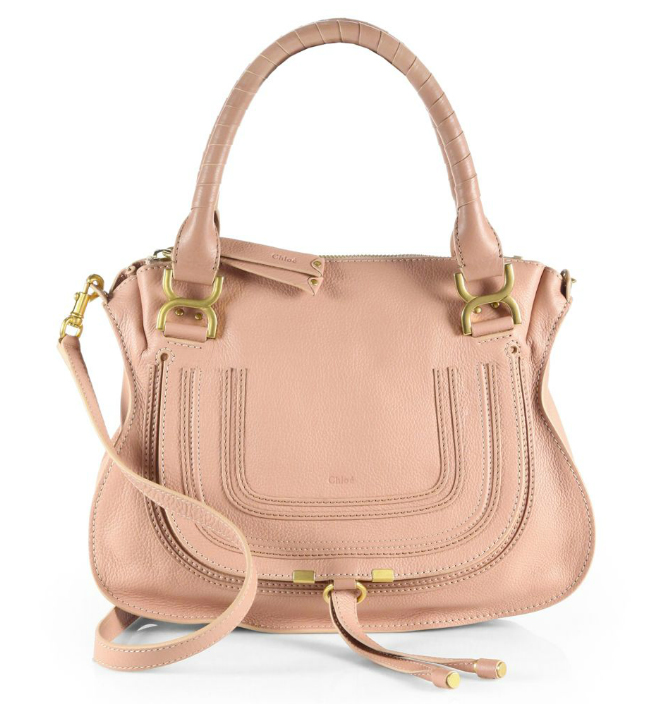 The Fendi Peekaboo is a special case rarely seen in the luxury bag market: it was launched, became popular, faded from the public consciousness and then became popular again, only a couple years after its initial debut. Now, it’s here to stay as a staple. 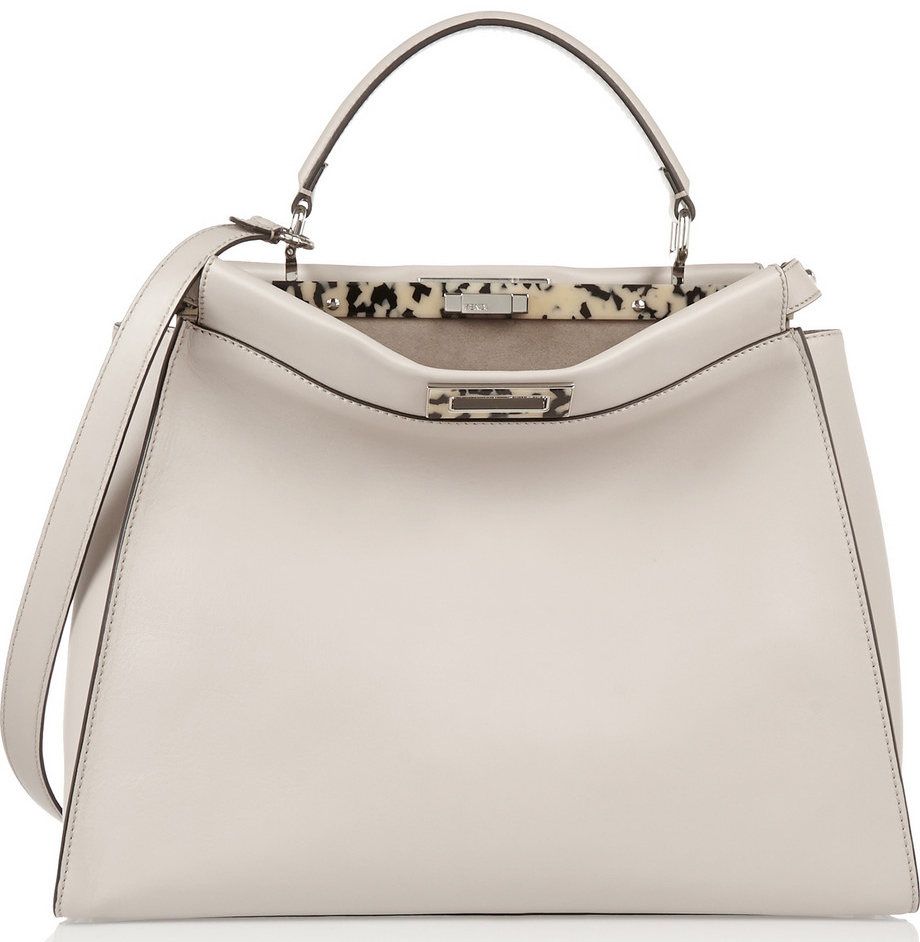 The Nightingale was launched way back in 2006, and its outlived almost all of its contemporaries. The sleek new design ensures it’ll be relevant for years to come. 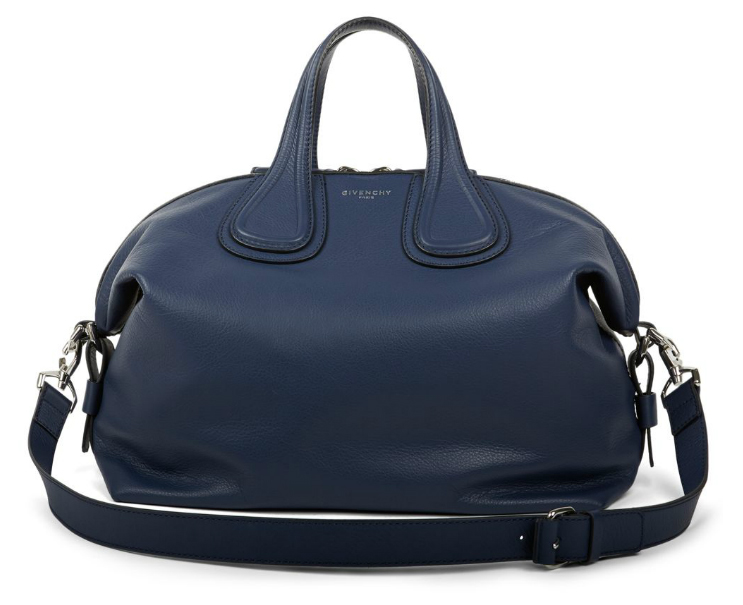 This bag has some major things going for it: a three-figure price tag for a leather bag from a four-figure brand, a functional, surprisingly roomy structure and a casual, carry-anywhere look. 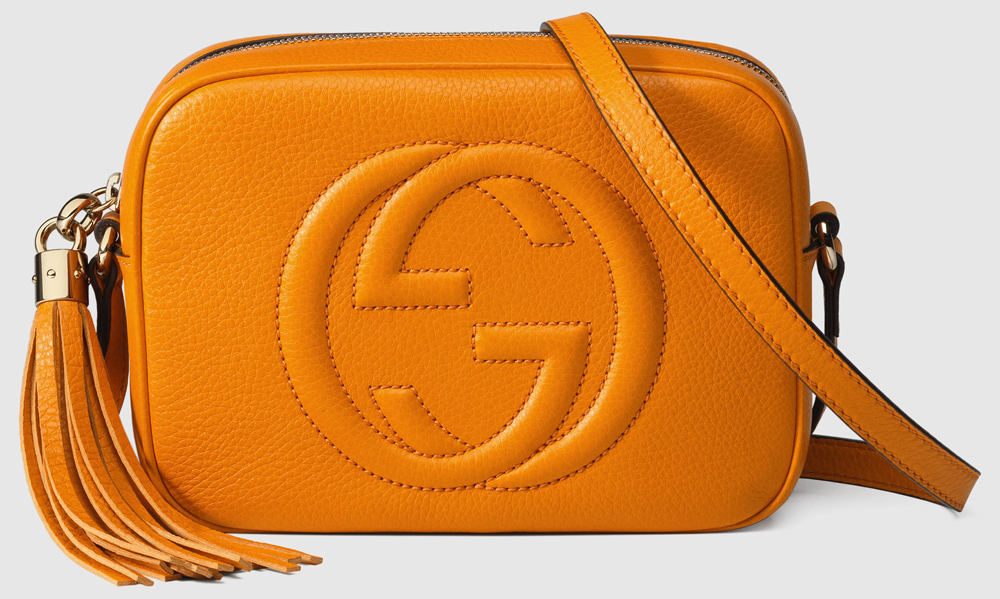 Proenza Schouler put a lot of research into its first handbag before the PS1 was launched, and they hit the mark perfectly. The bag is a perfect daytime option for a particular type of urban woman, and they’ll likely sustain its popularity for years to come. 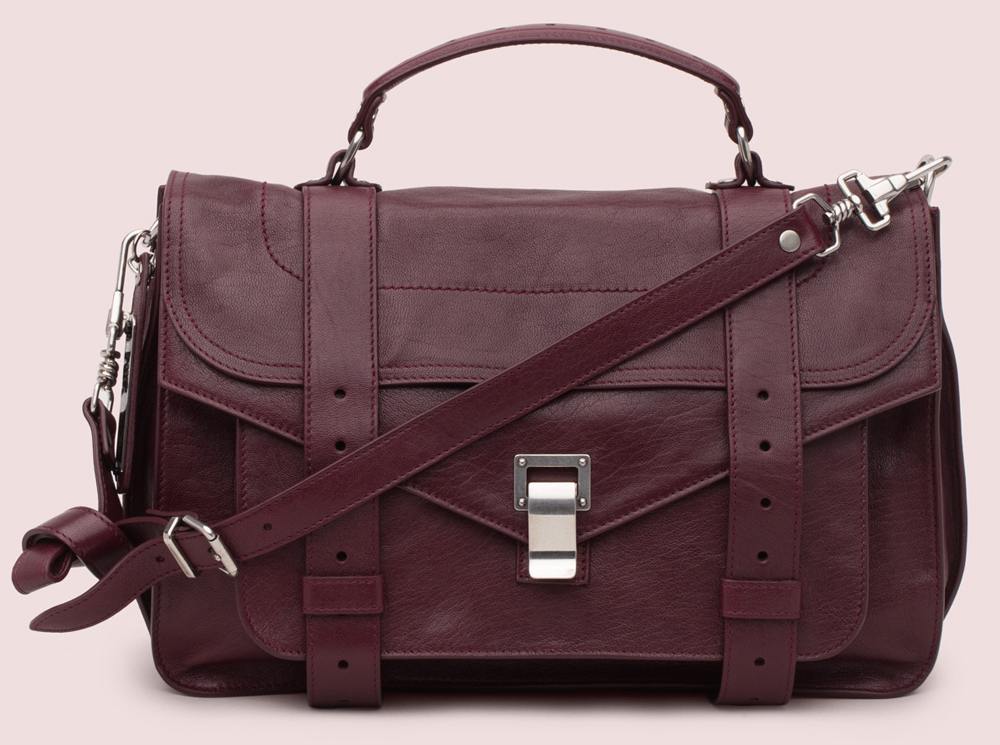 Ferragamo makes bags that are designed to withstand the test of time across the board, and this pretty little top handle has been particularly good at it. 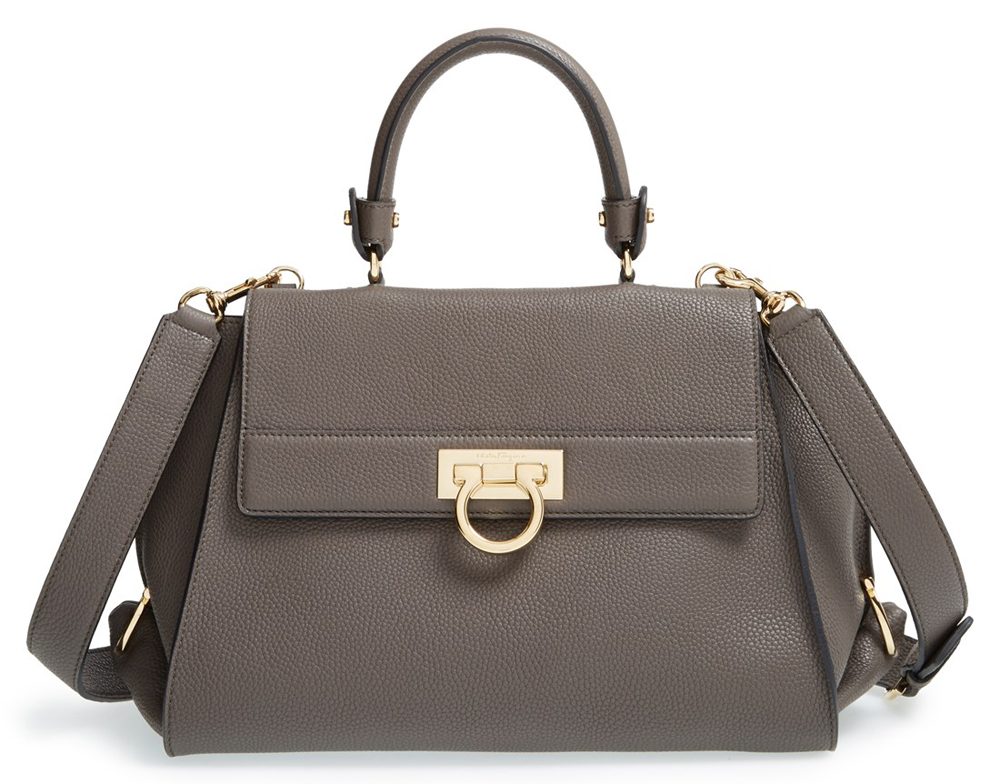 Finding a way to make luxury shoppers embrace a leather-look day bag without using any animal products is a feat, and finding a way to sustain that interest over years is unprecedented. 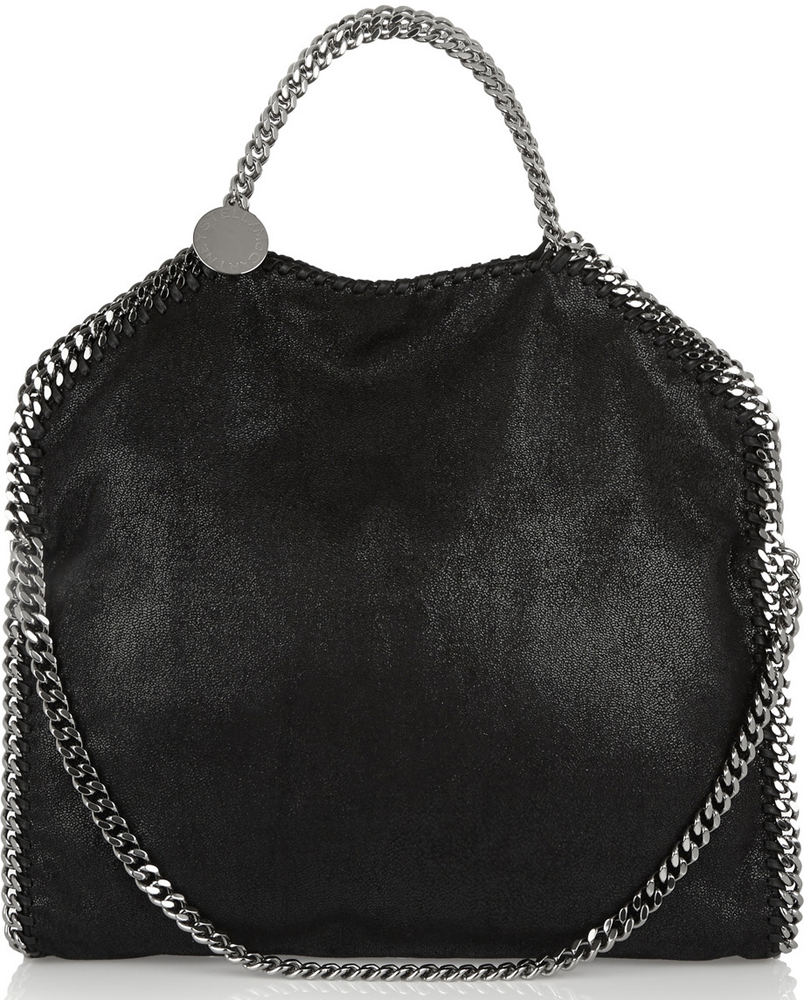 Almost any of Valentino‘s Rockstud bags could occupy this spot, but for our money, the line’s most tailored, ladylike bag is the one we’d bet to persist in its impressive run of popularity. 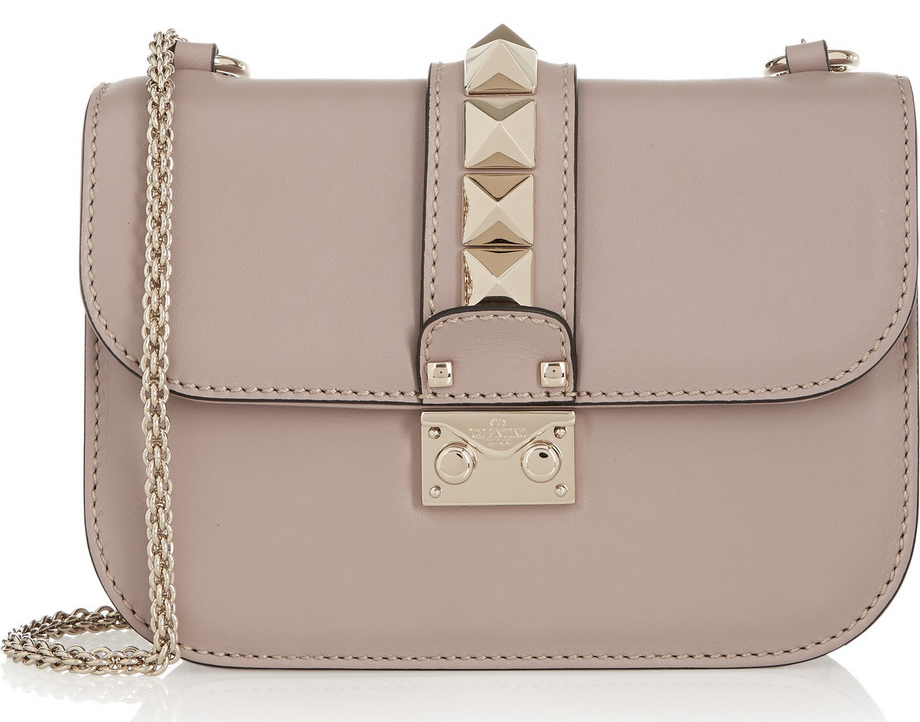 Valentino lock and the Nightingale next on my list. PS1 doesn’t appeal to me. I’ll try to get the Valentino in Europe because its a lot cheaper than USA.

I have the next step up from the disco in the Gucci Soho series (shoulder bag, gold chain handle, about $1350). It’s FANTASTIC because it goes day into night. I love the disco but thought I’d get more use out of the shoulder bag.

What about the Balenciaga city bag? Or has this gone to “classic” status?

I think it was both an It Bag of its time and a bag that’s crossed over to a classic. Very impressive on both counts.

I agree the balenciaga city should definitely be up there I can fit and carry around a small country in mine and it weighs next to nothing.

The Mulberry Bayswater. Classic and – in Oak, at least – it just gets better with use.

This is my next big bag purchase! I’m heading to Dublin for my wedding and I’m going to pick one up!

I just got mine for my birthday a few weeks ago and I love it. It’s very spacious and it looks gorgeous. I have a few tips, though:)

1) buy the Colonil leather gel and the Colonil waterstop spray and use the gel on your bag, leave it for a few hours to soak, and then use the spray to make your bag more water resistant.

2) Try not to adjust the inner straps too much, but if you do, make sure each side is even. I accidentally had my straps at different lengths and it made my bag look misshapen.

3) Use it! Don’t be afraid to rough the bag up. Watch out for it, but Mulberry bags don’t need to be babied.

What color are you going for?:)

Dylan,
I am so unfamiliar with this bag but after reading these comments I WANT ONE!! I want one in chocolate. I’m a Gucci, LV gal. What sets these bags apart? They look luxurious. Is it kind of in between in size between like a purse and a tote? Can it be via dual (with jeans) or for work?
Thanks in advance.

What sets the bags apart – Mulberry is a classic brand and therefore their main bags (the Bayswater, Alexa, Lily, Cara, and most bags with the postman’s lock) are definitely seasonless. The leather that most (not all) Bayswaters are made out of is called ‘Natural Vegetable Tanned’, or NVT. This leather is similar to Louis Vuitton’s vachetta in that it is untreated, though it is tanned so stains are less apparent. Therefore, it will get a a patina over time, especially in Oak, less so in darker colors.

Luxury – I personally think the Bayswater is a very luxurious bag, especially for what you’re paying. It’s pure leather. There’s no lining, so the interior is suede! It’s very soft and thick. The leather is one of the best around. Obviously nothing compares to Hermès, but the leather is very smooshy and soft while still remaining structured.

Size – the bag is about 14″ long, 10″ tall, and the base is 6″ wide. That is the size of the classic Bayswater. However, Mulberry makes a smaller size that has a crossbody strap. This is referred to as the SBS (Small Bayswater Satchel) on TPF. The Ledbury bag is basically an SBS without the strap. There is also a Bayswater Tote, which is basically just an open tote with the classic Mulberry lock and adjustable sides.

Versatility – I think it’s definitely a versatile bag, especially in the chocolate color. It can be used with jeans and a t-shirt or a day dress (not best for evening as it’s pretty large). It’s a fantastic work bag. You can put a laptop in it (my 13 inch MacBook Pro does fit, but I don’t carry it in the bag often) along with some files. If you don’t mind the slouch, you can loosen the interior belts all the way and it can accommodate far more than you would think.

You should definitely add one to your collection!!

I’m strongly considering one. The base measurement is listed at 7.45 which works better for me than 6 inches

Gosh, Thanks. I have just spent like an hour online looking. I think the chocolate one is destined to be mine. I just love how it fits under the shoulder so nicely. Just my favorite length bag. Your response was very helpful. Thanks!!!

Awesome! I’ve been lusting after it. Probably Oak since it’s seasonless. I like the Oxblood too, and the Mole Grey and the Black with Silver hardware. Nothing too crazy, I want this bag to last a long time and not go out of style! Thanks for the tip on the leather gel and spray, I’ll definitely get those. I’m crazy OCD about evenness so I’ll make the straps right and never touch them! Thanks for all the advice!

Mine is in Oak, and I’m someone who rarely wears anything other than black, so it’s a nice pop of neutral color. I’m lusting after the Medium Cara Delevingne backpack in Oxblood! It looks so pretty.

Go on … It’s stood the test of time and is virtually indestructible . It seems soooo loved in UK .

I’ve had my black Bayswater for a ten or twelve years now and while it’s not always the one I grab, it still looks great — maybe even better now that it’s softened up a bit. Definitely use the Colonil and stuff the bag with tissue when you’re storing it and I swear it will last forever!

Don’t know why it’s not on this list. Hands down the best workbag

So true, the Bays has to be included.

YES thank you — my bayswater in chocolate was scratched up by a family dog a few weeks ago, and yet it’s better than ever. It’s also a “workhorse” in the sense that it will haul everything that you need (and a whole lot of stuff that you don’t need, too).

Do you want to know something really interesting that is worth paying your attention right now,a fabulous online opportunity to work for those people who want to use their free time so that they can make some extra money using their computers… I have been working on this for last two and half years and I am making 60-90 dollar/ hour … In the past week I have earned 13,70 dollars for almost 20 hours sitting ….

Any skills, Degree ,Specific qualification is not necessary for this, just keyboard typing and a good working and reliable internet connection ….

Any time limitations to start work is not required … You may do this work at any time when you willing to do it ….

Half of this list isn’t even anything I’d consider a true workhorse bag. It seems like they’ve appropriated the term for whatever reason.
And yessss I have so much miscellaneous stuff in my Bayswater. Hairspray, face mist, gummy bears 🙂

I came close to purchasing one, but the lock, leather, and eventual slouch stopped me.
I found the leather to be too stiff for my liking. I didn’t care for the closure and found it not to be user friendly. If you wanted, you can’t leave it undone. I’ve seen many pictures of how this bag slouches, and I didn’t liked the way it pulled if that makes sense. I prefer more structure. If you can, go play with it for a while. Put your stuff in it. I was glad I did.

I own the Rockie, and it’s too heavy to be a workhorse.
I consider a workhorse bag something that can be worn daily. I would be scared to carry some of these because they are so small for the average working woman. I’d be afraid to forget something.

hah! i think the LV neverfull should be on this list.

That’s my go-to work bag! I cram so much into my bag!

I agree with most of the bags in this list. I’ve been lusting over the PS1 for years but could never find myself forking over that much money for the brand.