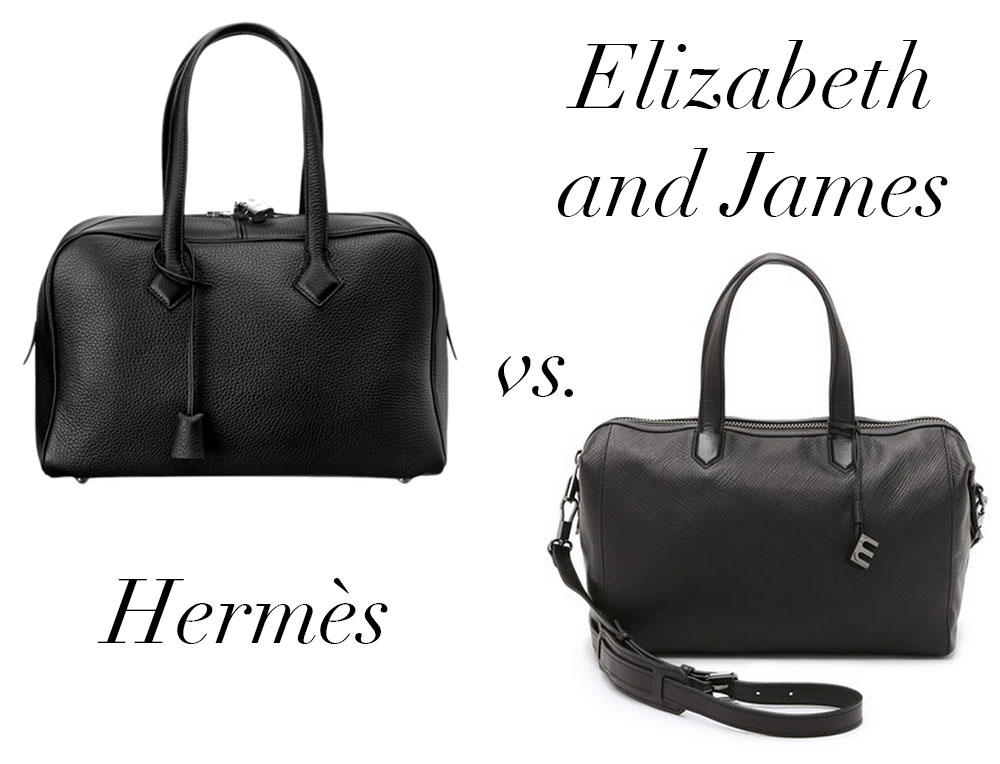 Comparing an Hermès bag to that of almost any other brand isn’t fair under normal circumstances; when you do it with a contemporary design that costs less than $500, it’s the sartorial equivalent of bringing a gun to a knife fight. Today, though, that’s what I’m here to do.

The Hermès Victoria II has been around since 2007, and the Elizabeth and James Scott Duffel is brand new for Fall 2016. They’re both simple, basic duffels, the type of which many brands make here and there. (Balmain’s Pierre Bag springs to mind in particular.) You get two top handles, a spacious, boxy interior constructed of soft leather and a zip closure. That’s about it, except for the optional shoulder strap that Elizabeth and James provides.

The Victoria II, of course, has the advantage of being an Hermès bag and all that goes along with that. It’s most commonly made of soft, thick, durable clemence leather, and the finishing touches on the bag are all perfect, right down to the stitches. The disadvantage though, is that it has an Hermès price tag: $5,150 via Hermès.

The Elizabeth and James bag, on the other hand, is made of texture-stamped cowhide, which isn’t as supple or sumptuous, but it should be just as durable. On the whole, the Scott Duffel is a good value at $495 via Shopbop; it’s versatile and classic, and unlike many contemporary bags, it can be taken to work and won’t look dated in a year.

Ultimately, the choice between the two boils down to whether you prefer to pay a premium for the best version of a look available, or if you value getting a good version at a similarly good price instead. So, which will it be? 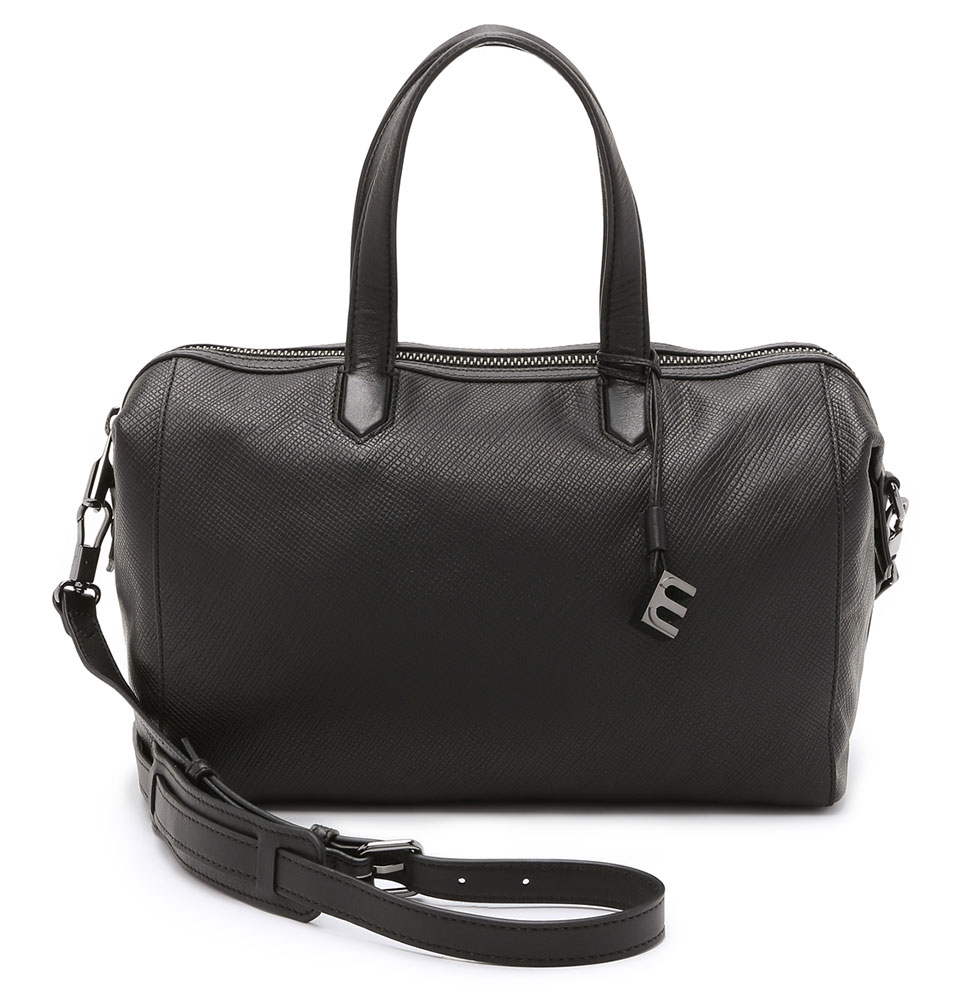 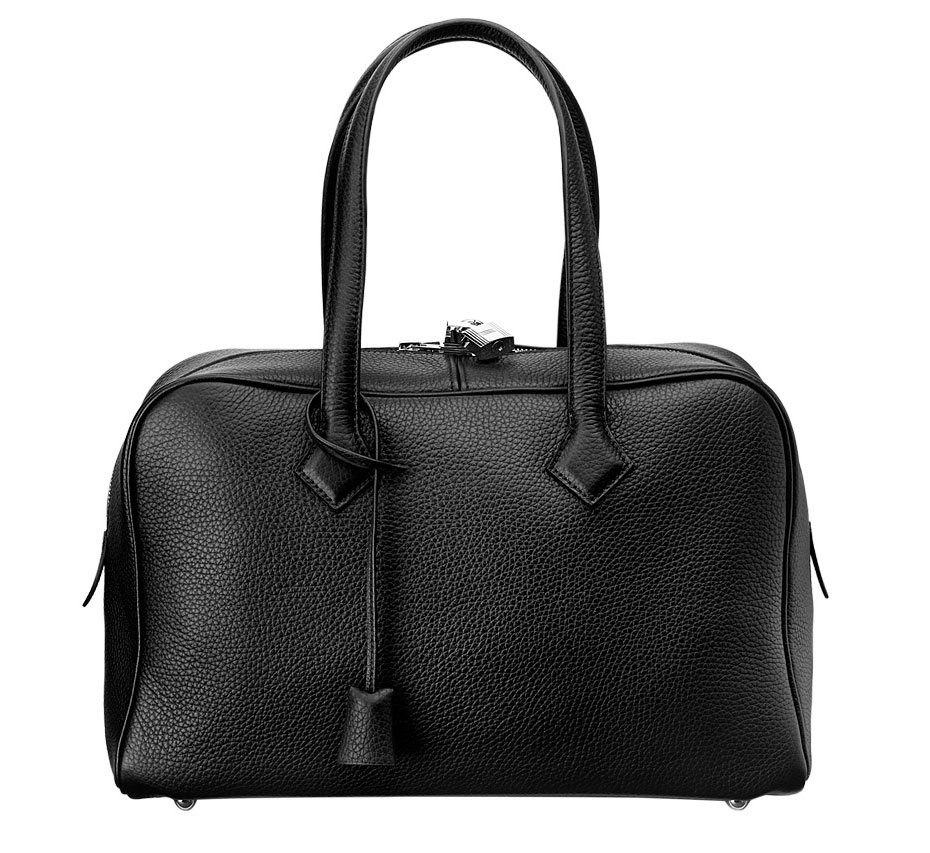 i’m not an Hermes person but the Elizabeth & James bag has a cheap saffiano-like look to it that i’m not a fan of. With that being said, the price difference is a Lady Dior and since these are both ugly bags I’ll take the cheaper one and keep the change.

Very well said. And it’s cheaper, so honestly not as worried about banging the bag up, and you know, actually using it instead of hiding in my closet weeping bitterly and hugging an Hermes bag that will never, ever see the light of day because it cost me a kidney.

Lol straight to the point, i love it! I do agree though, nothing spectacular about either of these bags. I am not a fan of that cheap saffiano-like look either, regardless of the designer, if a bag has that look i just won’t be buying it, feels very Michael Kors/Prada-ish.

I think there’s a notable difference between a true Prada saffiano tote and MK or some other cheaper wannabe brand copy. But I don’t like either of the choices in this thread. For that price range, would rather have a Lady Dior medium and this Tod’s bag (although I don’t know the model name/number — does anyone here know what it is)? Has a nice shoulder strap and is very comfortable to wear.

If I were looking for this type of bag I’d be more inclined to spring for the Vuitton SC.
I find it mildly insulting that Hermes charges 5 grand for a bag with a canvas lining :-).

I have the Saint Laurent Duffel in black/white and it’s beautiful, durable, and costs less than $2000 — as missarewa notes, the price difference is enough for a fabulous second bag!

I ordered the Victoria II bag and sent it back. I did like it very much, but I don’t like to spend that much on an everyday kind of bag. I will for special bags, but I didn’t find the Victoria special enough to warrant the price. The lining is not lux at all. The Elizabeth and James bag would not get a second look from me.

i kind of really love the Hermes because of how they eveolve its so simple easy to wear good quality light and under the radar when in leather and bags i really can not accept mid to low quality bags, and the E&J really looks poorly built.

If I’m going to buy an Hermes it would be a kelly/birkin.. Definitely not this one.

I’m a fan of Victoria so I’m bias here.

Elisabeth and James bag is more cyclones shaped. I think it may compare better with Balenciaga Twiggy.

Just by looking at the two bags, I would get the Hermes Victoria II. But given its price, I don’t think I would ever get a bag that simple, Hermes or not.

I prefer the shape of Victoria II.