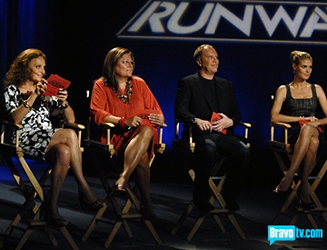 I have kind of mixed feelings about Diane Von Furstenberg. Her clothes are usually beautiful, she’s a legend, but she can tend to rub me the wrong way when I see her in interviews. Plus, a bunch of season back on America’s Next Top Model, she got all appalled at plus-size Toccara for being a size 12, which kinda made me want to punch her in the face, ya know? Ever since, that’s what I think of when I see her clothes or something about her on TV, so I kind of snarled when they announced at the end of last week’s show that she was going to be this week’s gimmick. So here I am, a day late (I ate some bad seafood Wednesday night…I’m going to be staying away from scollops for a while), to tell you if this ‘fashion legend’ made me like her any better this week, who sucked, who didn’t, who cried (spoiler: Kenley. A lot.), and who went home.

I’ve got to say, I loved what they showed of her collection. I love pattern, particularly black and white pattern, and I love retro from the era that this challenge involves (the 1930s and 40s of the film ‘Foreign Affair’). So, points for Diane. I will also say that, as someone that loves fashion, going through the DVF fabric room must be kinda spectacular.

The interesting thing about this week is that it seems like they’ve gotten rid of all the people that truly and completely suck. At this point, all the people left can successfully make clothes (whether their clothes are my taste or not is a different issue), and I like the show much more when it gets to this point.

Actually, I just remembered Blayne. So nevermind, I spoke too soon. We must get rid of Blayne. I will not mention Stella here because she scored about 8,000 points with me by making fun of Rachel Zoe and her hideous bag dresses. So, Stella obviously DOES have some sense in her head.

I think the most interesting aspect of this challenge is to see who can successfully work with pattern. Since this is DVF, you can’t just make a nice black dress and expect to not get called out, and some people just get all panicky when a piece of patterned fabric shows up. I know people with great style that can’t work one into an outfit to save their lives, and I think not using a pattern in a DVF challenge is sort of like using tablecloths in the supermarket challenge – safe in a really stupid way. People that were guilty of this: Leanne, Stella (a tiny check does not count in the world of DVF).

Kenley defended her work, and the dress was well-made, well-fitted, and well-styled. BUT, it was only a dress, and DVF’s ‘Foreign Affair’ collection is full of layers (something all the other designers didn’t try to weasel their way out of), so Kenley is not our winner this week.

Korto made a maxi halter dress in a black-and-white, Asian-inspired pattern that, to me, looked a tad summery for a 1940s European spy. I didn’t adore Korto’s dress as much as I usually adore her stuff and I thought the pattern was a bit modern for the assigned influences. It was well made and I loved the jacket, but there were better things to be seen tonight.

And one of those things was made by Leanne. Despite the lack of pattern, her gown is utterly and completely gorgeous in basically every way, and the juxtaposition with the jacket is wonderful. It fit the era, it fit the look of the collection, and it was still modern. It was easily my favorite look of the episode and possibly the most wearable look of the season thus far.

I also thought that Terri’s look was underrated, although it seems that some of the other (read: lesser) designers think she’s become one-note. Well, I don’t, and even if she has, if you can make a great shirt, pair of pants, and blazer every time, then you’ve probably got yourself at least most of a fashion line, don’t you think?

Enough of who was good – it’s a lot more fun to snark about who wasn’t, don’t you think?

First, Suede. Suede is one of those people that I spoke about previously that can’t do pattern – his primary fabric choice was ugly and horrendous, and then he tried to mix it with herringbone, a combination which made me want to look away from the TV. The shape of the outfit was also unflattering and, honestly, kind of confusing.

Blayne made some sort of stupid dotted breeches for which he should be heartily castigated, maybe even sent home. But he won’t be, because they’re keeping him around to annoy me until I die (dielicious?) of irritation. He wasn’t even in the bottom two.

So who WAS? Stella and Straight Guy Joe.

Straight Guy Joe made some kind of shiny polyester outfit that you could buy at Hot Topic that had some sort of quasi-cape that wasn’t really a cape because it wasn’t long in the back (he should have made it long in the back, the back of his outfit as a MESS – did his shirt close with Velcro?).

And Stella. Stella made a suit and a cape out of a tweedy brown fabric (the cape was sorta leatha, natch) that was kind of ill-fitting, but I didn’t think it was nearly as bad as Straight Guy Joe or Blayne. The judges disagreed, though, and Leathaface Stella went home, much to my chagrin. Was she good enough to win the show? No, but I kinda liked having her around!

We didn’t get many spoilers for next week – no hint of a guest, and the designers all say “awww” when someone or some thing walks out on the runway. Maybe another challenge with dogs and owners? Babies and mommies? Either would be kinda cute but boring, no?