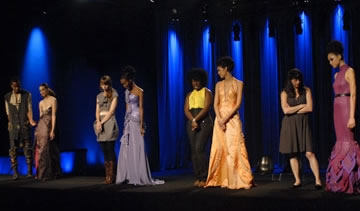 So, we’re kind of getting to the end of this whole thing, aren’t we? Tonight, we’ll narrow it down to the Final 3 and hope that someone kicks Kenley in the face. We know from the limited previews at the end of last week that they all go somewhere, and then they all come back, and then they all cry for one reason or another. Which tells us…exactly nothing. So what was their field trip? Why are they all blubbering? What in the world do they have to do?

As it turns out, they go to the New York Botanical Gardens. Collier Strong, paid shill for L’Oreal, gives them their challenge: take pictures and make nature-y dresses. I’m kind of…underwhelmed? Although it seems like they have a habit of throwing a softball to the final 4 – last year, it was the “art inspired” challenge. I like that they give them a somewhat vague task to let them really show what they do before they make the final elimination, but still, I want a TWIST of some kind!

When they go fabric shopping, there’s a bit of foreshadowing: one of our designers manages to leave something on the counter at Mood! Who will it be? Who will they blame for it? Will they cry? Well, we know the answer to that question – of course they will. The fabric left was black tulle, and you can’t make a ’50s dress without a bunch of stupid tulle, so it was KENLEY! HAAAAAAHAHAHA. And right about now, we learn why it’s important to be nice to people – at least two of the other designers have tulle that they aren’t going to use, but they’re certainly not going to give it to someone that’s a rude, condescending, completely loathsome know-it-all. Which, to her sudden disadvantage, Kenley is. 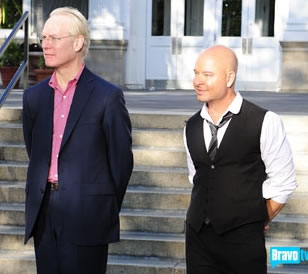 So how does Kenley deal with this? She sulks and glares at the other designers from a distance like a 4-year-old in timeout. Exactly as one would expect. But Tim Gunn, the lovable, exceedingly fair-minded man that he is, tells her that she can go back and get it if it’s on her receipt because he doesn’t want her to be handicapped by it.

Pooh. Well, what if we handicap her by breaking her knees? Would that be ok? She prattles on about how it’s fine that none of the other because she’s ALWAYS the outsider and she has to be TOUGH and something about her dad and blah blah…we all know one person like this, and does it never occur to any of them that no one likes them because they’re COMPLETELY UNLIKEABLE? I doubt it does. Kenley certainly isn’t self-aware enough to figure it out. This is proven about ten minutes later when she takes time out of her day to totally trash every other designer in the room for the confessional camera. It’s great to see people learn a lesson, isn’t it? Except Kenley is painfully idiotic and doesn’t learn hers at all.

This week, we actually get to see a good bit of the dresses before they go down the runway – Leanne’s details are beautiful as always but I DESPISE the color she chose, I’m not sure that Korto’s looks well-made, Kenley appears to have turned her girl into a giant magenta reptile, and Jerell’s might actually be pretty cool.

So what went down on the runway? Were my first impressions correct?

Well, Korto’s looks like a prom dress. Which is sad, because I love Korto, and I didn’t want her to make a giant peach prom dress. Korto is too good and too talented for that. But that’s what she did, and I thought it was the worst dress of the night. Sadly. I really wanted to bash Kenley up and down for the worst dress, but I’m just not diggin’ hers tonight. It did, ultimately, appear to be better made than in the work room, but still…prom dress.

Now, Kenley. My impression was right – she made a giant magenta reptile. The bottom looked like a weird, puffy costume and the rest of it wasn’t much other than a skin-tight tube. I loved the color choice, which is the only reason that the dress itself comes out above Korto.

Leanne and Jerell fared better, but not fabulously (I seem to remember everyone but Christian face-planting in this episode last year, so I think the pressure gets to them in this position). Jerell’s was glam while still being modern, but the finishing was rather poor. I enjoyed his color palette and the structure of the dress was interesting. Leanne used a drab color (and stuck an extra bolt of fabric to the back of the dress for no reason), but her tailoring was beautiful and the dress fit like a glove. Jerell was my winner, though, and he was the judges’ winner as well.

So, who lost? No one. They’ve pulled this crap for the past 2 years – all 4 will create collection but, like last season, only 3 will “show” (well, they ALL show – the final 6 showed at fashion week so that the secret of the final 3 wouldn’t be given away weeks ago). Slightly different than last year, though, none of them are safe from being the final person auf’d before we get to see collections. Whatever. I don’t really expect Project Runway to follow its own rules anymore.

The most interesting part of the show, however, was watching all the other designers finally get to say what they feel about Kenley to the judges. When Jerell started to tell them that she was the designer he would eliminate, Kenley interrupted (of course she did) and Jerell smacked her back down by saying, “They’ll get to you later, and at THAT point, you can start speaking.” Burn.

And then, when they got to Kenley, she started complaining about how she’s “fought her way through life!” and how no one has ever liked her and whatnot. From all that I can tell, Kenely’s journey hasn’t exactly been one in which she pulled herself up by her bootstraps – she comes from a two-parent household and has spoken fondly and positively of both parents, her father had a job that afforded her many fun boat adventures as a kid, she went to and graduated from college, and the previews for next week indicate that she has a rather cute apartment. These are not exactly dire straights that she’s been in, and I bet that anyone who has dealt with actual strife wants to punch her right about now (like, Korto maybe – a first generation American whose parents came from a poor African nation who most likely DID have to fight and scrap and pull herself up). As far as I can tell, the largest obstacle Kenley has deal with is her own terrible personality.

Sigh. And she’ll be back next week for me to scowl at her for another hour.

Wait…do we have a reunion show next week? Usually there’s one in between the last elimination episode and Bryant Park. I bet we do! And I’m sure that how everyone hates Kenley will be a prime topic of conversation!

So, now, I need your predictions – who are our final three, and who’s our winner? Tell me in the comments!