This is a late post to have you remember the last Gossip Girl and be prepared for GG tonight! 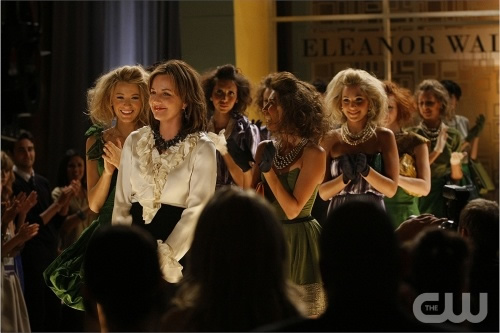 ZOMG, y’all. Gossip Girl! Queen Serena is back on top, and I don’t think Blair is going to take it very well. It’s Fashion Week in New York, Serena is hanging with a socialite named Poppy (perfect socialite name) and they’re playing a Connor Oberst song during the opening sequence (it’s called ‘New York City – Gone’ and you better iTunes it). Between my favorite clothes and my favorite indie rock, they’re practically calling my name this week – but to get the goods, you’ve got to make the jump.

So, let’s catch up. Chuck loves Blair, Blair still hates Chuck, and with Little Lord Fauntleroy and the Dirty Duchess banished back to Blighty, Chuck has decided to make Blair miserable and vulnerable by tempting Serena back to her old, evil self. How does he do that? He makes her insanely jealous by paying a girl with questionable hair to be interested in Dan right after his breakup with Queen S. So now, Dan has been banished back to ‘Lonely Boy’ and hopefully will have fewer speaking parts, Chuck gets to glare and scowl from the shadows a lot, and Serena and Blair are headed for a showdown so epic that I’m not sure if Bryant Park’s tents can hold it. Nate is, presumably, still making his one and only facial expression somewhere. Got that? Ok, let’s go. 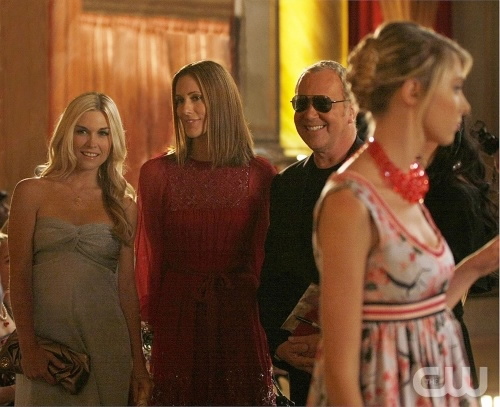 Serena and her new socialite friend appear in fashion bible Women’s Wear Daily, totally trumping Blair’s offer of second-row seat’s to her mommy’s show in the eyes of their gaggle of easily lead friends. The sorta-predictable catfight ensues, which makes Blair look mean, petty, and immature. Which is kind of what makes her so fabulous, even though I don’t think she’s going to come out on top against Serena. Plus, she’s battling entirely too many foes at once – Serena, Little Jenny Humphrey, Chuck Bass, her own mother’s disinterest. It must be exhausting to be her, and it means her best efforts are spread thin.

Blair tries to get back at Serena’s perceived disloyalty (and Lil’ J’s dominance in the eyes of Momma Eleanor) by shoving Serena all the way to the back row, which is thwarted when her mom realizes what has happened. She further tries to thwart Lil’ J by sending off all the models that she is responsible for, but Jenny bounces back by suggesting that Serena, Poppy, & Co. take their place and maybe garner some extra press. Blair also tattles on J for missing school, but we’ll get to that in a bit. Serena finally confronts Blair over the thing that has bothered me the entire show – Serena DOES appear to always bend over backward to indulge her insecurities, and that must get really old after a while. If she does anything special or successful, all Blair does is sulk and hate her. What kind of friend is that? 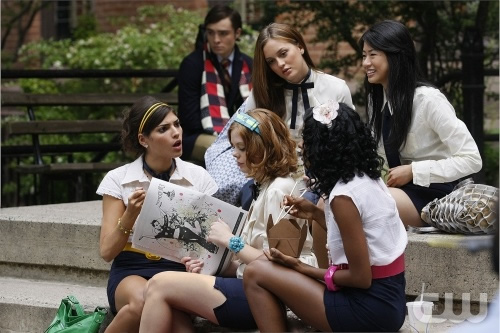 Meanwhile, Blair’s destined other half is playing cat and mouse with Lonely Boy. They go out and Chuck plies him with what appeared to be a tab of ecstasy and 6 shots of tequila (is anyone else not surprised that he’s a lightweight?). Dan ends up kicked out of Chuck’s limo after some miscellaneous fun with some twins, wasted and without his shoes. +1 for Chuck. Since he still purports to be some kind of wannabe writer, he goes to his mentor du jour (no, not Jay McInerney anymore!), who totally tells him how much he sucks, as it is his job as a mentor to do.

So the new mentor decides that Chuckles is going to be the new subject of Dan’s writing, so despite the X-and-stolen-shoes incident, Dan goes back for more and finds Chuck at his usual watering hole. And you know what this means? I don’t get my eternal wish of less Dan and more Everyone Else. I do get to see Dan go to jail, though, and here’s why: Chuck brushes off Dan’s probing questions by going to hit at the woman at the bar that he (and I, as well – they totally sold me) assumed was a prostitute, and when she shuts him down and her date realizes what has happened, he makes a scene with Chuck. Dan, in a fit of manliness totally unlike him, punches the dude in the face. 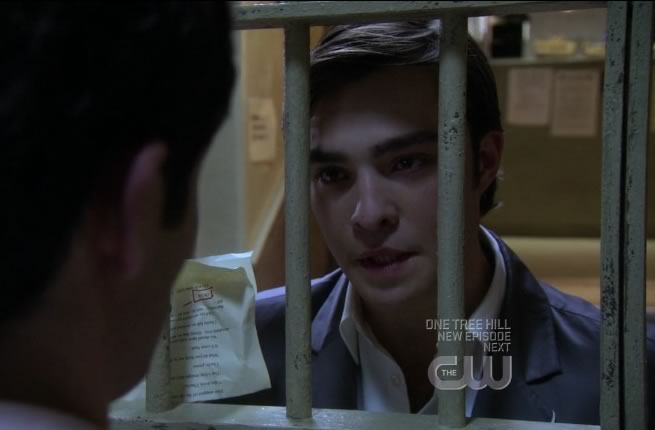 So they go to jail and have a heart-to-heart like men in a foxhole about why Chuck’s the way he is (daddy issues!) and what ‘makes him tick.’ Chuck confesses that his dad hates him because his biological mother died while giving birth to him, a fact that he holds against Chuck until this day. Dan finally has something to write about, but as soon as Chuck (accidently) finds out that Dan is using him for inspiration, Chuck says that his mom really died in a plane crash when he was 6, so who knows which is the truth (I suspect the first explanation is – Chuck had a special kind of scowl while saying it, and it’s like him to cover up his vulnerabilities once he realizes that he’s been exposed). Chuck also leaves him to rot in jail instead of springing him as promised, so the previously mentioned ‘mentor’ has to bail him out. Could they not have just left him locked up for a few episodes?

While Dan is spending a brief stint in jail (and, annoyingly, whining about what it will do to his college application), Lil’ J is storming Fashion Week and leaving lots of people in her wake. In an attempt to undermine Lil’ J, her mom, AND Serena (how does she do all of this without at least getting one stress pimple?), Blair gives Serena one of Jenny’s dresses instead of something from her mom’s line to wear down the runway, and Eleanor is suitably embarrassed and sure that J did this on purpose. Because Jenny made the deft (I always knew she had it in her!) decision to butter Blair up right before this was all exposed, Blair saves the day, persuades Eleanor to take credit, and gets the entire staff to thank Jenny for her hard work.

As that scene closes, Lil’ J’s wannabe-cool dad shows up, spoiling the fun for everyone. Earlier in the episode, when we find that Jenny has apparently stopped going to school to work, Pa Humphrey makes her go talk to the headmistress, and we finally are told what was said during the meeting – Jenny quite school! Dad is, understandably, kinda pissed. Obviously, this is supposed to play as a stupid decision, but it didn’t seem that stupid to me. I know she’s still in high school, but if J is supposed to have made that last dress by herself, with scraps of fabric, on a sewing machine in someone’s workroom, then maybe traditional education is not the route for her. Many extremely creative people take alternative paths to success – Anna Wintour dropped out of high school to cover fashion news. So I found myself rooting for her in this scenario, because her character is obviously talented (and is it just me, or is Taylor Momsen, the 15-year-old that plays Jenny, about 8 feet tall and all legs). We’ll see what Pa Humphrey does – I doubt she quits school for good. 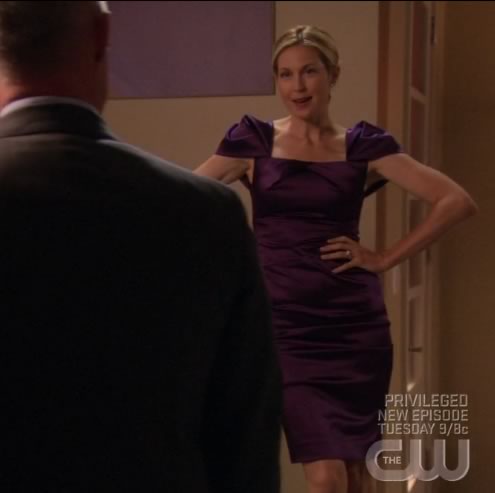 Speaking of The Olds, Lily Van Der Woodsen has started a nice little plot for herself as well (yay! I like Lily, particularly her outfits!). In trying to find and purchase an old nude photo taken of her by a famous artist, Lily finds that new husband (and spawner of Chuck Bass) Bart has bought it out from under her – except she never told him about it, and no one else was supposed to know. When confronted about the picture (and she did the confronting in a BEAUTIFUL purple shift dress), Bart admits that he did a thorough and complete check of her background before they were married, and he apparently uncovered something of which she is deeply ashamed. We won’t find out what that something is for at least another episode, but clearly the Van Der Woodsen apple doesn’t fall far from the tree, if you know what I mean.

This episode was incredibly complex and set up some interesting plot points for the future – a Jenny/Blair alliance against Serena, Lily’s shocking past, Jenny’s apparent exit from high school, Chuck’s insecurities with his father. This episode was also delightfully Nate-and-Vanessa-free, and if we could send Dan off to wherever those two are, that would be awesome. This episode wasn’t overtly exciting, but it’s necessary to have an episode like this every now and then off of which to base future awesomeness.

And it looks like we might get some awesomeness next week – the group all goes to Yale (or, they go to Columbia’s campus and we all PRETEND to believe that they’re at Yale) and it looks like we’ve got some honest-to-goodness, Skull and Bones, off-the-wall crap going down. Plus more Blair and Serena showdown goodness. And hopefully Nate and Vanessa continue to be in whatever black hole into which they’ve been sucked.

An end note to those that also watch Project Runway – did anyone else see a few references to it in this episode? Michael Kors appeared momentarily several times, and Jenny carried a bag from Mood, our Runway-ers’ favorite fabric store! Yay! I love media crossover. If I missed any, post them in the comments! 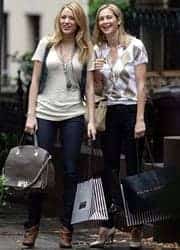 Serena carried a Celine Watch Me Work Bag. Buy through Net A Porter for $2100.