The Row’s crocodile backpack will be priced at $39,000 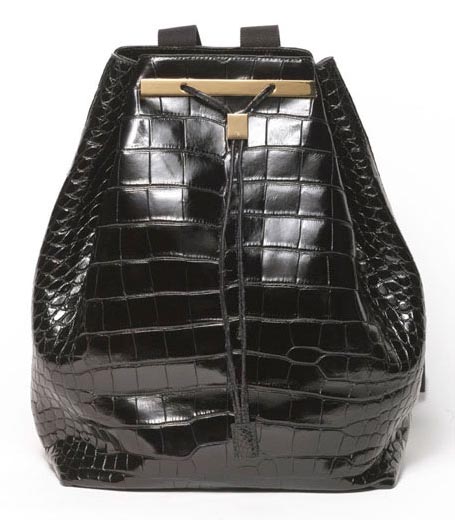 Ok, so here’s the deal. The Row launched its first-ever line of handbags at Barneys last night, and as I was dutifully checking Twitter while finishing up my posts for the day, a strange thing came across my computer screen. Fashionista.com, staffers of which were in attendance at last night’s launch festivities, tweeted a picture of what appeared to be the bag above and a price point: A cool $39,000. I promptly fell off my chair.

Just two days ago, I joked that the brand’s silence on the crocodile prices while releasing the numbers for the other bags probably meant that if you had to ask, you couldn’t afford it. I had no idea how right I was. Based on the mid-four-figures prices of the leather bags and small non-croc exotics, I would have speculated that the croc pieces would end up in the $10,000 to $15,000 range, and that perhaps the exclusion of the prices from the first round of press information meant that they would go as high as $20,000.

I was not prepared for $39,000, though, and I thought for a moment that perhaps we were being punked. For comparison’s sake, the prices for a 30cm crocodile Hermes Birkin reportedly hover somewhere right above $40,000 depending on the type of crocodile, if the information I found last night and my quick currency conversion skills are to be believed. So The Row is quite literally charging Hermes prices for its bags.

The Olsen twins are undoubtedly committed to the quality and precision of The Row’s products, and for that I cannot find fault, particularly based on something as unrelated as their childhood stardom. They aren’t fashion pretenders; Mary Kate and Ashley are the real deal, just like I think Victoria Beckham is despite her history as a pop star. But if everyone choked on Victoria’s $14,000 price tag for her first croc bag, I wonder how this one will do at retail. Of course, I can imagine that only a tiny number of them will be bought by stores, but is there an audience for this bag? Will people who buy $1800 blazers from the line also be willing to spend over 20 times that on a trendy (if pristine) backpack when the twins have yet to prove themselves as accessories powerhouses? All we can do is wait and see. That, and feel a little poor. Handbags from The Row will be available at Barneys and Barneys.com.

If people buy it (and no doubt someone will) then I think that’s how the Olsens will “prove themselves.” Fashion is crazy, no?
But I live in a part of the country where that same 39K would be a down payment on a nice home, so what do I know? If I had 39K in disposable income, I think I’d buy something other than a bag with it. Don’t hate me, I’m a Midwesterner. 🙂

Don’t get me wrong, this bag is beautiful, and I’m sure it’s impeccably made, but sometimes I wonder how good it is for our society when the things that the “tastemakers” of our culture have are so inaccessible for the everyday person. It’s one thing to have a bag that costs $1500, but $40k? That’s someones salary for an entire year!

WOW, I wasn’t expecting that price!!! I’m sure this bag is beautiful in person and the craftsmanship must be superb. If I had an extra $40,000 I will probably buy a purse as nice as this one but NOT a backpack.

$40,000 for a backpack, a beautiful well made croc backpack. I’ll pass. Even though I don’t have that kind of money laying around, I wouldn’t purchase it. I’d rather it be a down payment, or just sit and collect interest. And now that the Birkin is becoming so commonplace I’d be hard pressed to spend $40k on that as well.

All I could say is wow.
Then, how delusional.
Now, I just find it laughable.
I’m sure that the skin is lovely, but paying $39,000 for a bag from the Olsens just seems funny to me. I know that they have some success from The Row and E&J, but I just keep thinking Wal-Mart when I see them.
I’m just not real sure that women with that kind of expendable cash would spend it on a backpack from The Row. I wish them good luck.

I personally like bags trimmed with some croc, the all croc looks great for clutches, not sure how I feel about this backpack it seems kinda plain……..I am quite sure the workmanship is amazing but it doesn’t do it for me

Clearly OTT. Even though the Croc prices are up and they might have lined it with antilope suede from Sweden the production cost would be 4,000 US$+/- Just think of the margin they have addded! the bag is timeless and will last but…
Curious how many will be sold

Can I say effen ridiculous? I love what the Olsen twins have brought to fashion, and I adore the Elizabeth and James line, but I think they’ve gotten ahead of themselves on this one. Earn that $39,000 price tag, get some real “history” behind what you’re doing, then charge $39K. I’m sure someone will buy the bag, but IF I had the $39K that I could ONLY spend on 1 handbag, something from The Row would not be it. Become legendary, then charge 39K.

The price literally took my breathe away. And I second that comment that undoubtedly, SOMEONE will purchase it. Here’s the bright side (I suppose). For all those who feel an Hermes Birkin is now seen “with everyone” & that it lost its exclusivity, you may now feel free to purchase this!

*ouch* still zinging on those of us tired of seeing the Kardashians and their Birkin rainbow! lol