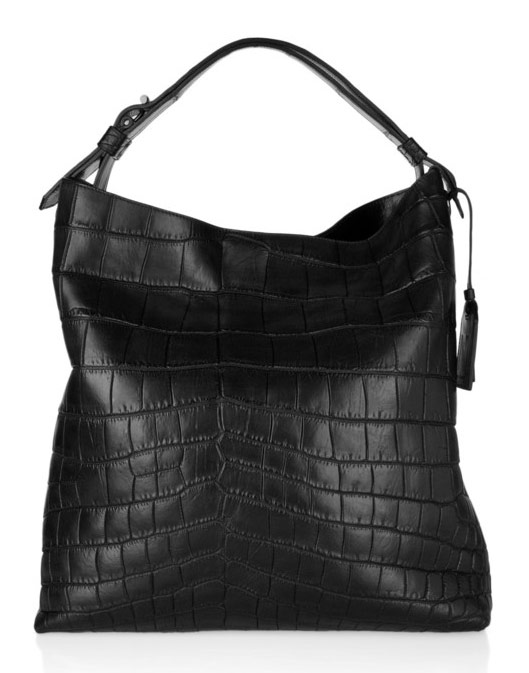 A $30,000 price tag always sticks out to me, probably because when I was growing up, that’s how much I thought a car cost. Naturally, I’ve since learned that sometimes cars cost less, and even more bizarrely, sometimes handbags cost more. The Reed Krakoff Alligator Hobo, however, comes in at 30 grand on the nose.

Black alligator seems to be the preferred method of delivery for that many thousands of dollars worth of handbag, if this design and The Row’s backpack (which has now been identified as alligator instead of our original guess of crocodile) is any indication. For my money, I’d want something a little more adventurous, but I suppose that versatility is of the essence when one is actually considering spending that much money on a single bag.

I was somewhat surprised to see such an expensive piece come from Reed Krakoff; one of my favorite things about the brand since its launch has been that Krakoff’s prices are much more in tune with the kinds of price points that consumers want than most other companies seem to be. On further reflection, though, launching this design at this time makes a certain kind of sense. Krakoff needs to make sure that it continues to distinguish itself from parent company Coach, both in design and in public image, and adding a few ultraluxury pieces to the mix is a smart way to do that while garnering some industry chatter in the process.

So while this bag might be a savvy move for the people who make it, I wouldn’t say the same for the people who buy it. Save your outrageous handbag budgets for something a little more special; at this rate, the next $30,000 bag should be just around the corner. Buy through Net-a-Porter for $30,000.

In this last issue of USA Bazaar (page 86) I saw this beautiful RK mini alligator for 6,500 which fill my heart of hope…But now, who knows if the price was correct…

The design itself is a little on the plain side just a simple hobo but I guess the centerpiece is supposed to be the gorgeous hide. I’ll pass for $30k.

Very very nice bag but too expensive (Gucci, Bottega Veneta in this case look almost cheap). I mean that this is just an “up-and-coming” designer (quoting NYMAG) so the price shouldn’t be so high especially for a product that is just pretty not even “amazing”.

I know that he’s trying to distance himself from Coach. However, some of his bags still have that Caoch-esque feel to them. This bag is no exception. Look at the buckle on the strap and the hang tag.
I am not a fan of exotic animal skins. However, I understand why this bag has such a simple design. The crocodile skin is the true star of the bag. Hence, Nancy Gonzalez. Nothing spectacular about the designs of the bags. It’s the skins ha everyone is coveting.

Exactly… And I can’t see anyone who is willing to pay $30K for a bag passing over any of Nancy’s bags for Krackoff’s hobo. It’s cute but he should have stuck with embossed leather and made this $300.

To me, this bag is sublime.

I’m not going to comment on the price of the bag anymore, because I think everything that can be said has already been said. So I’ll just say what I think about the design of this bag… I think it’s gorgeous. When the skin you’re working with is that pristine and perfect, then any “over-designing” is going to take away from the beauty of it. I think Reed Krakoff did the right thing in keeping the bag simple.

Wow, I learned a ton from this post. I’ve been lusting after a Reed Krakoff Boxer I for a couple months now and had no idea his parent company was Coach! I freaked out a little when I first saw the title b/c it makes me very nervous that a brand I’m newly into and thought to be somewhat reasonably priced (comparatively speaking of course) might be heading into off-limits territory. But if Amanda’s take on where the pricing is coming from is accurate, it’s more understandable. Thanks for your insight Amanda!