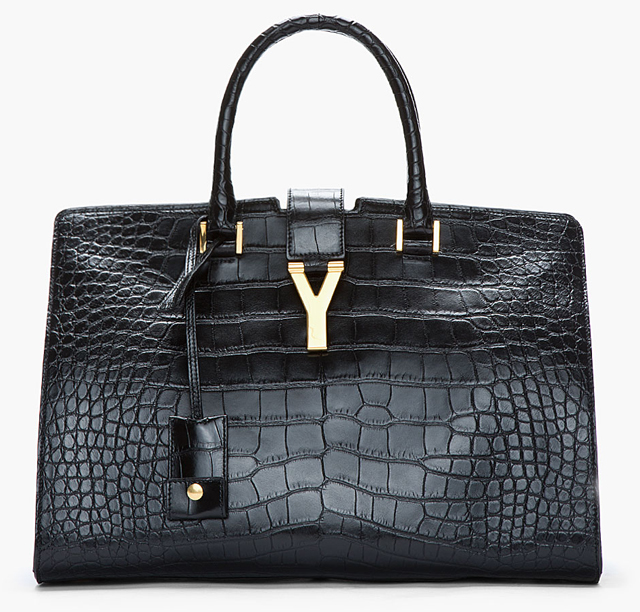 In scouring the Internet for our article on the Internet’s most expensive luxury handbags, one thing became clear: even if a brand doesn’t do much to actively promote its most expensive pieces, almost all of them have those bags waiting in the wings for the right client. Under previous creative director Stefano Pilati, Yves Saint Laurent was one of the brands that mostly dealt in regular leather, with an occasional snakeskin or ostrich bag here and there. Under Hedi Slimane, that (along with so many other things) appears to have changed with the Saint Laurent Alligator Cabas.

First, a general note: It’s not entirely clear what Slimane intends for this redesigned version of the Cabas ChYc to be called. SSENSE, which carries this alligator version (the most expensive Cabas ever, by our calculations), calls it the Chyc Tote. Net-a-Porter calls the leather version the Cabas Classique. Neiman Marcus has it as the Y Ligne bag. The Saint Laurent web store pretends the bag doesn’t exist entirely, along with any other design that isn’t a complete Slimane original. For a brand as concerned with a stark rebranding effort as Saint Laurent, you’d think this would have already been settled. At least one thing is certain, though: Slimane intends to take the brand’s accessories in an even more expensive direction than before.

Oddly, it’s one of his decisions that makes the most sense. Consumer interest in handbags at the top price tier of the market continues to grow, especially in Asia, and Saint Laurent has the name recognition to make that buying decision seem less risky. I’m also of the (apparently minority) opinion that the new, sleeker Cabas ChYc is an aesthetic improvement on its predecessor, and this alligator version takes full advantage of its simplified lines. What we have here is definitely the most exciting bag to come out of the brand since Slimane’s arrival, although I’m not sure it’s such a compliment to say that when the bag in question is a simple, black alligator tote based on the work of his predecessor. Buy through SSENSE for $29,500.