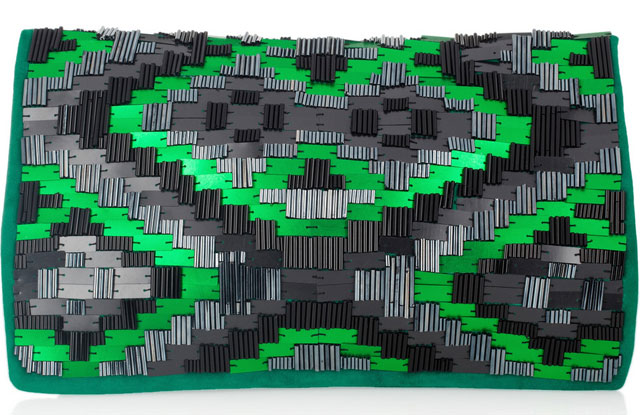 We’ve showered a bit of love on another of Matthew Williamson’s clutches in the recent past, but now that I’ve seen the Matthew Williamson Bead-Embellished Suede Clutch, I feel the need to do it again. The last clutch was a hippie-chic take on opulent brocade, but this design approaches from the opposite direction: it’s a modernist take on the classic hippie look. Not only is it a testament to Williamson’s under-credited versatility, but it’s a credit to his eye; he’s the only designer who can ever be credited as “hippie-anything” whose work I still enjoy with great regularity.

Williamson tends to pick extremely simple shapes for his clutches, and when you see the kind of embellishment he does, it’s easy to understand why – when you’re doing full beading over a material like suede on a sizable bag, it’s best to leave the bag’s structure as simple as possible so it doesn’t compete with the embellishment. That’s a design reality that Williamson clearly understands, and a lot of other handbag designers would be well advised to make a note of it.

On this clutch, the main attraction is the pixelated Aztec print made out of super-modern square and rectangular beads. The beads themselves are almost corrugated, which gives the piece a slightly industrial, rough-at-the-edges feel the supplements the the inherent glamour of a beaded clutch with something a bit more interesting. Nice work again, Williamson. Buy through Net-a-Porter for $1285.

I love this; the colors work really well together!

I love this bag! I fell in love with it when it first appeared on net-a-porter. I hope it lasts to go on sale!

Really unique and special, can’t wait to see who wears it first.

…and people would actually exchange this for $1285?!

It looks like 90s computer programs meets tribal. Not a fan, especially at $1285.