Sorry, Derek Lam, I’m just not buying what you’re selling here. I know, I know – you’re trying to make a little niche for yourself among the scads of smaller high-end bag designers out there. And it can’t be an easy thing, because convincing people to spend a couple grand on a bag from a designer that doesn’t have much handbag cache is a bit of a challenge, to say the least. But that doesn’t excuse what we have here. 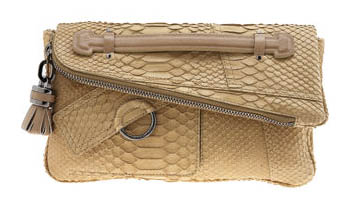 When you’re dealing with quirky, non-symmetrical designs, there’s a really thin line between one that works and one that doesn’t, and I don’t think that the Derek Lam Elsa Python Clutch does. The material and color are both beautiful, and some of the asymmetry is well-done, but beyond that, Lam totally loses me. The half-covered silver ring doesn’t appear to serve any kind of functional purpose at all, and things always go off the rails in handbag design when you start adding elements that would normally be functional that don’t serve any functional value. But I think that the final nail in this little clutch’s coffin is the enormous, luggage-like handle at the top. Not only is the material not the same as the rest of the clutch, but the style is also different. It’s traditional and staid while the clutch is edgy and hip, and on top of that, the proportion of the two doesn’t even work. Buy through Barney’s for $1450.