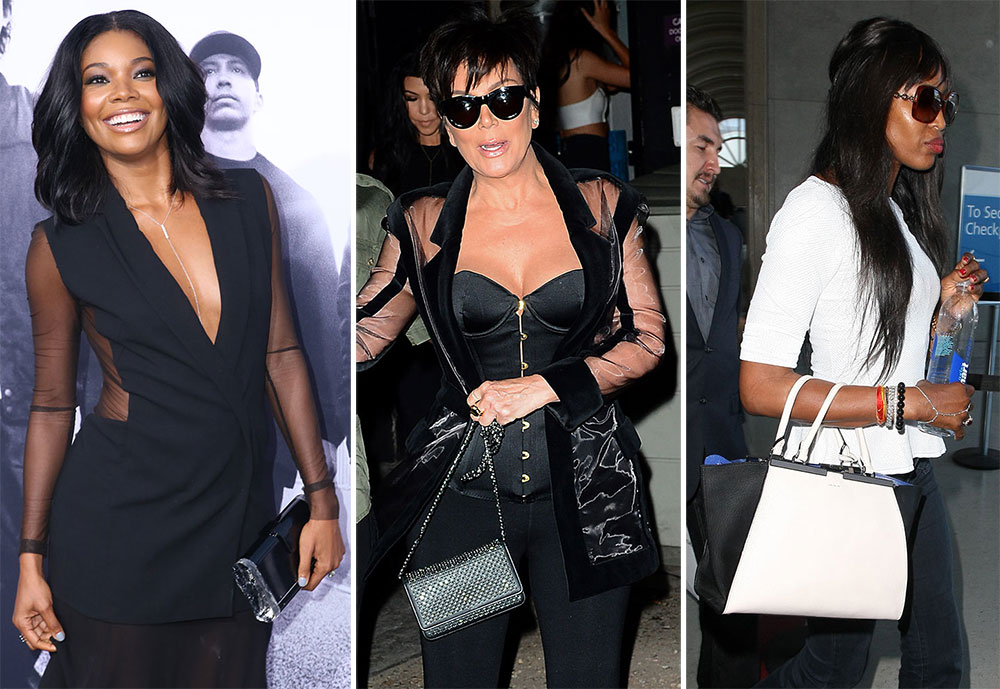 Edie Parker‘s simple, chic plexiglass clutches have really taken off with celebrities this summer. These clutches have become so de riguer in recent months that it’s starting to feel somewhat rare to spot a celeb carrying a clutch from any other brand. (Don’t believe me? Then please, join me for a full tour of 40 Pictures that Prove Edie Parker’s Remarkable Red Carpet Dominance.) For more casual, everyday affairs, celebrities are becoming increasingly reliant on two new styles from Chloé: the Drew and the Faye. It’s usually hard to speculate which one is more popular with celebs at any given moment, but this week, it’s definitely the Drew.

Swedish actress Alicia Vikander is one of the new faces of Louis Vuitton’s Fall 2015 campaign, so, as you might expect, she carries a fair amount of Louis Vuitton. She’s currently in NYC promoting her upcoming flick, The Man from U.N.C.L.E.. 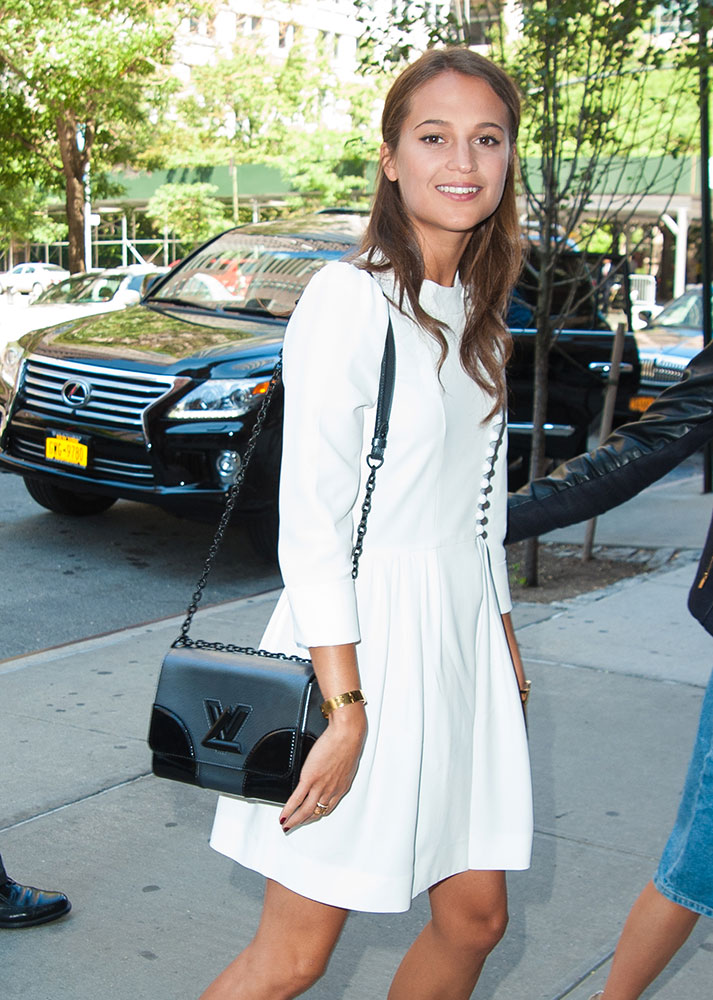 Here’s Gabrielle Union, attending the Straight Outta Compton premiere with a little black Edie Parker Lara Clutch. (LBEP?) If you missed “What’s In Her Bag: Brett Heyman of Edie Parker”, I’m going to have to insist you check it out pronto. 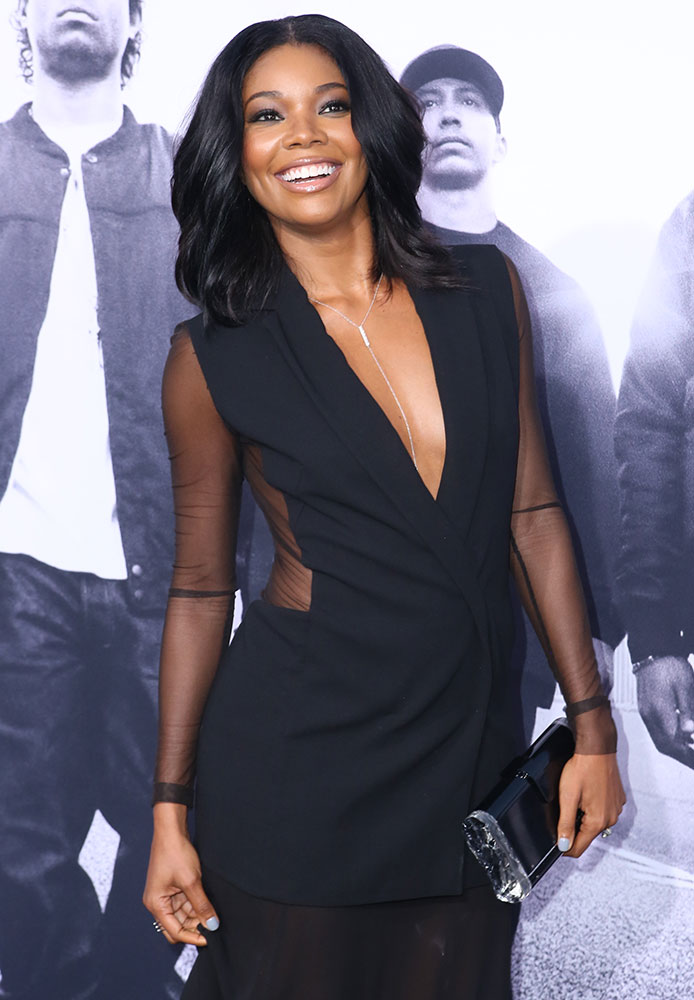 This is actually the second time we’ve spotted Julia Louis-Dreyfus blitzing through an airport with this exact Hermès bag. It clearly makes an ideal travel companion. 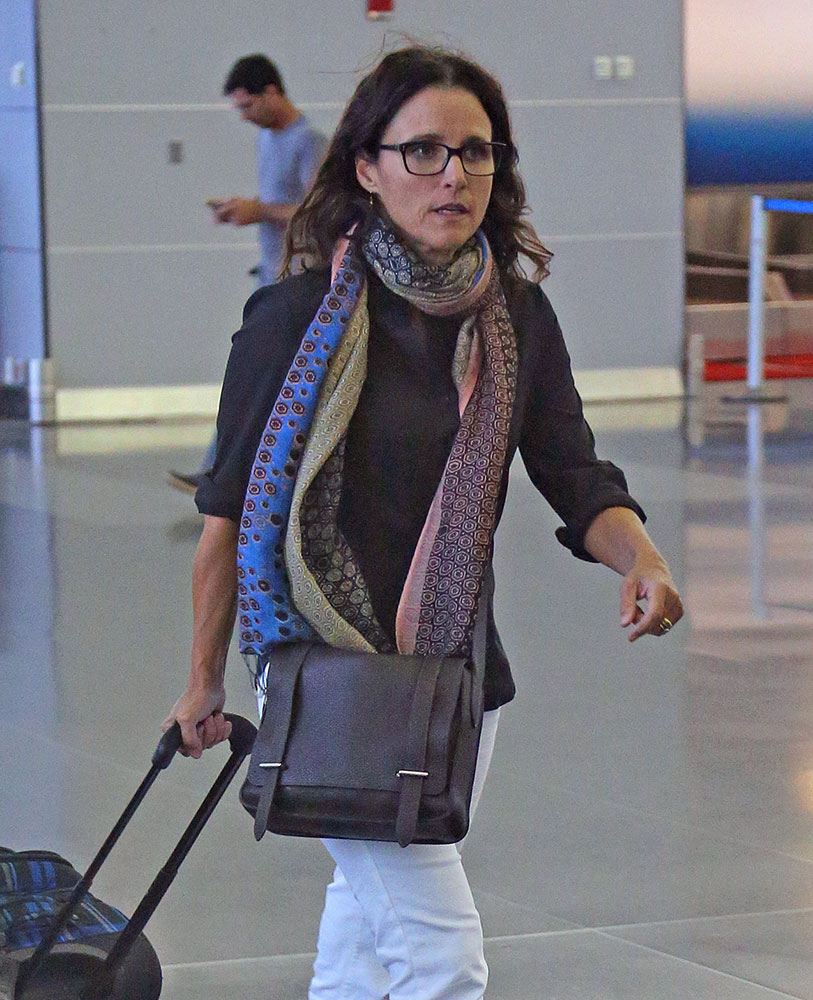 Meanwhile, at LAX, Kate Mara was spotted rocking a super short new ‘do and carrying a large, bicolor Prada duffel. We suspect she’s also carrying a Valentino Rockstud Backpack, but we can’t see it quite well enough to be certain. 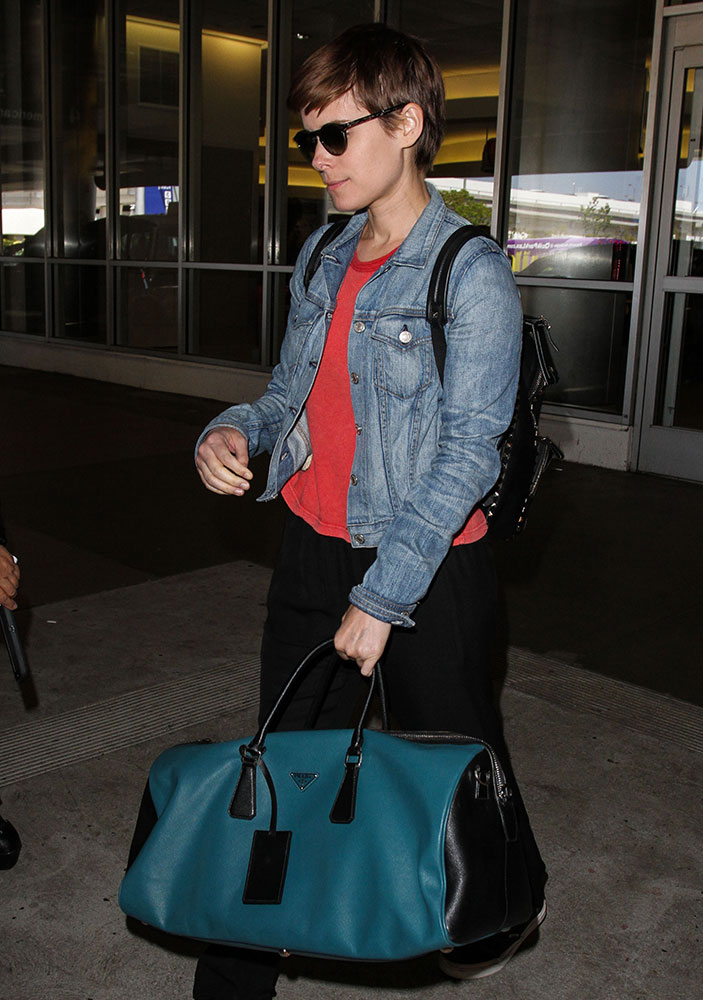 Kendall Jenner was recently spotted shopping at Wasteland in West Hollywood with her preferred bag of the summer, the Céline Nano. I don’t think any of her sisters have been half as consistent with their bag choices as Kendall has been with her various Nanos. 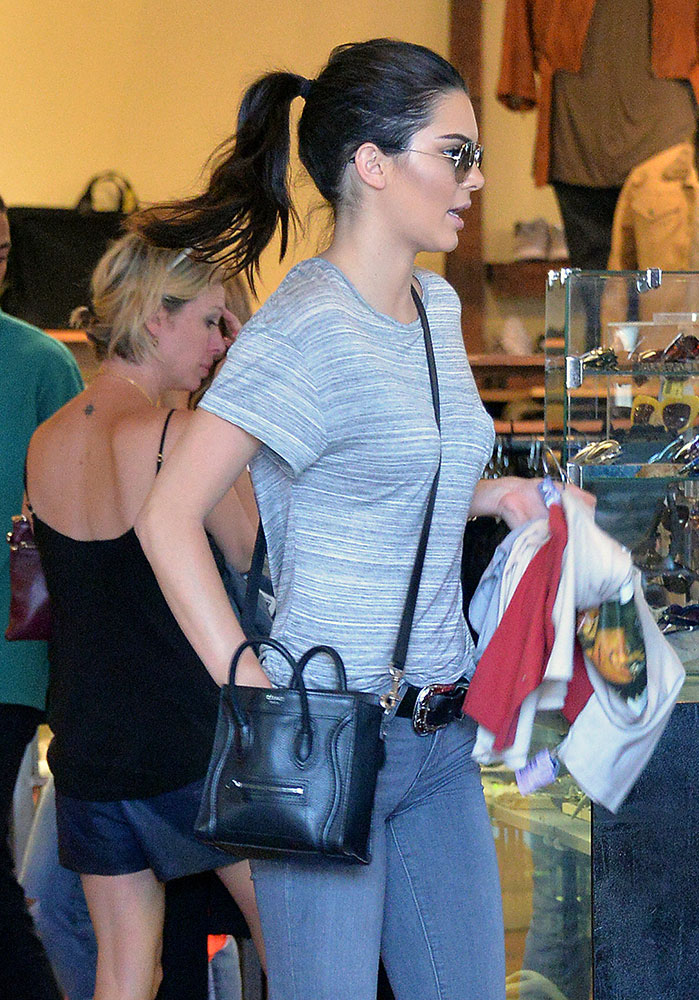 Kris Jenner recently carried a sparkling Chanel Strass Wallet On Chain Bag to her daughter’s Kylie’s 18th birthday party. That’s right, Kylie is finally 18, so we can all stop wringing our hands about her lifestyle choices. Right? 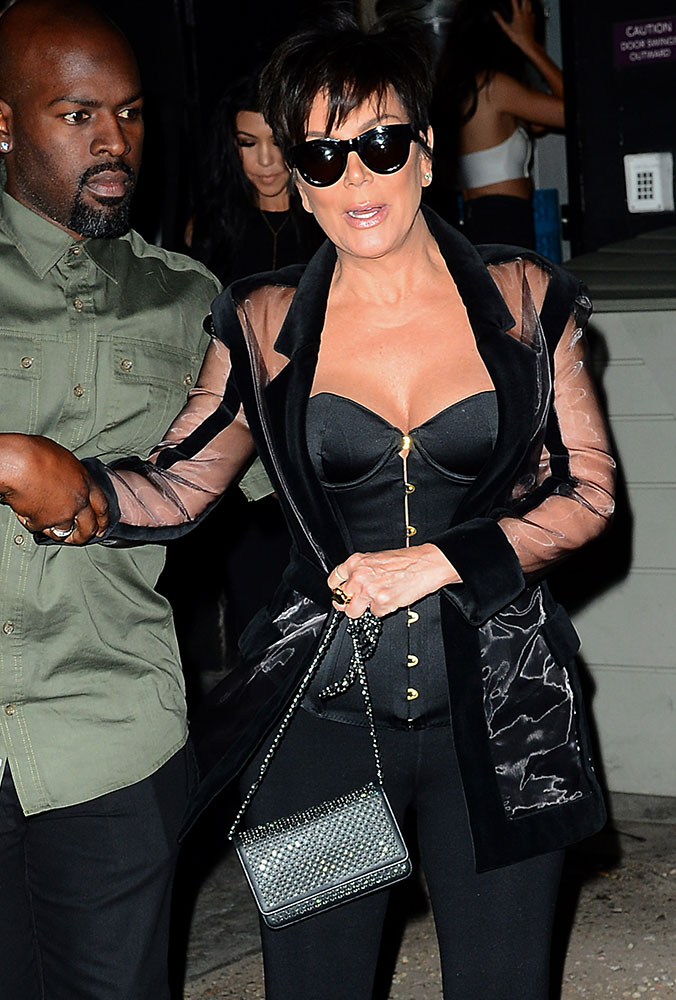 Here’s Naomi Campbell, making her way through LAX with a tricolor Fendi 3Jours that, oddly, matches her water bottle AND also that American Airlines sign behind her. 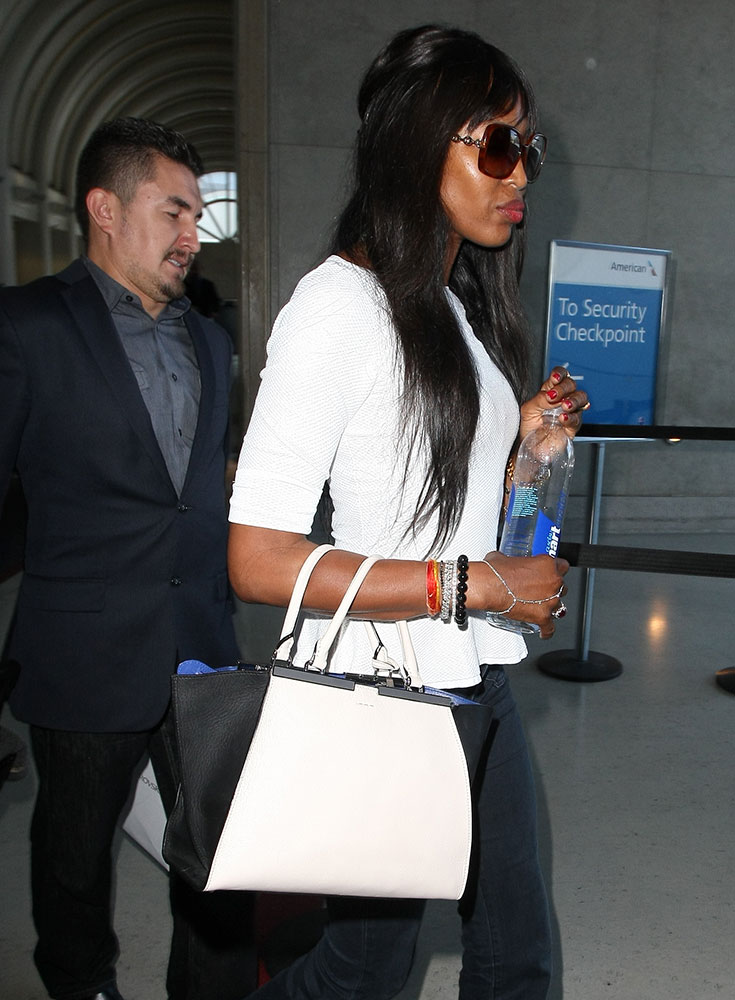 Last but not least we have Portuguese model Sara Sampaio, heading to the gym in Soho with her pale pink Chloé Drew. This woven leather flap version is especially lovely, but as you might expect, the exact version isn’t available in stores at the moment. 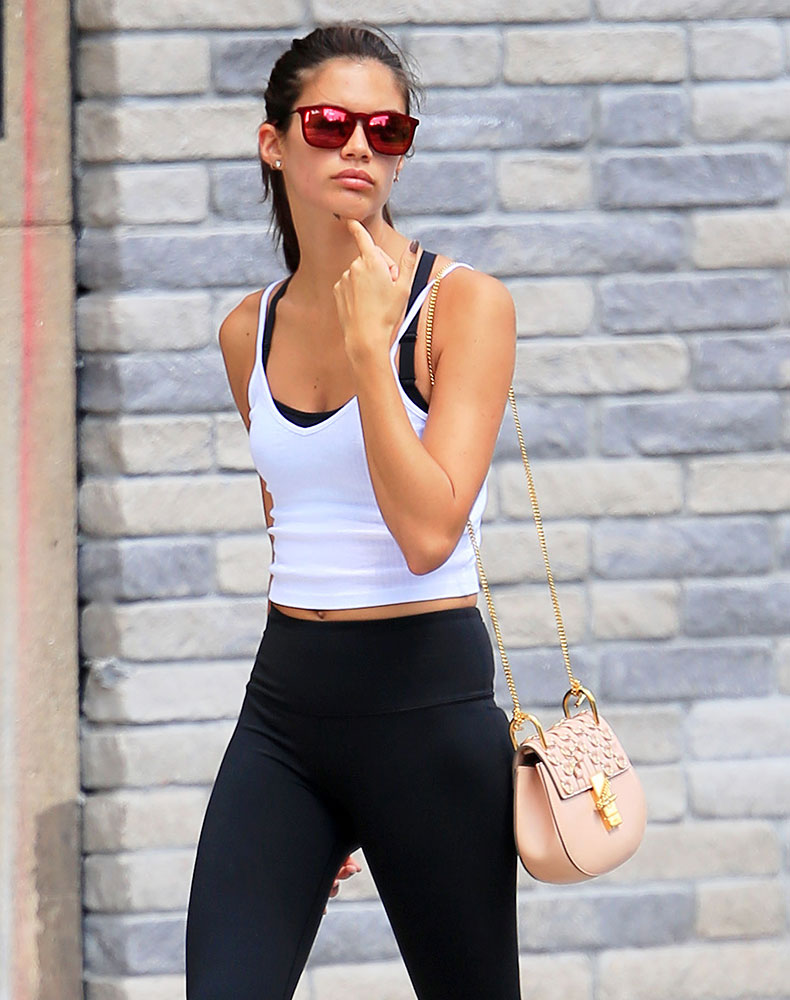 the LV Twist bag looks like it’s made out of plastic. ugh

Am I the only one not crazy about the new LV logo?

And oy vey, what a kiss of marketing death for any product to be seen on Kris Jenner.

The Twist bag is on my wish list. I love it.

“That’s right, Kylie is finally 18, so we can all stop wringing our hands about her lifestyle choices. Right?”

Interesting that PB considers people uncomfortable with Tyga dating an underage girl to be “wringing hands” about Kylie’s life. As if that’s something not worth concern.

Do you want to freelance online from home doing simple jobs with your dekstop or laptop for 3-5 hours each day, get $85/h and get a check at the end of each week and choose yourself your work time??? Then read more about it on my disqus profile

Kris Jenner grosses me out.

On a happier note, that short haircut on Kate Mara is gorgeous. I love her in short hair.