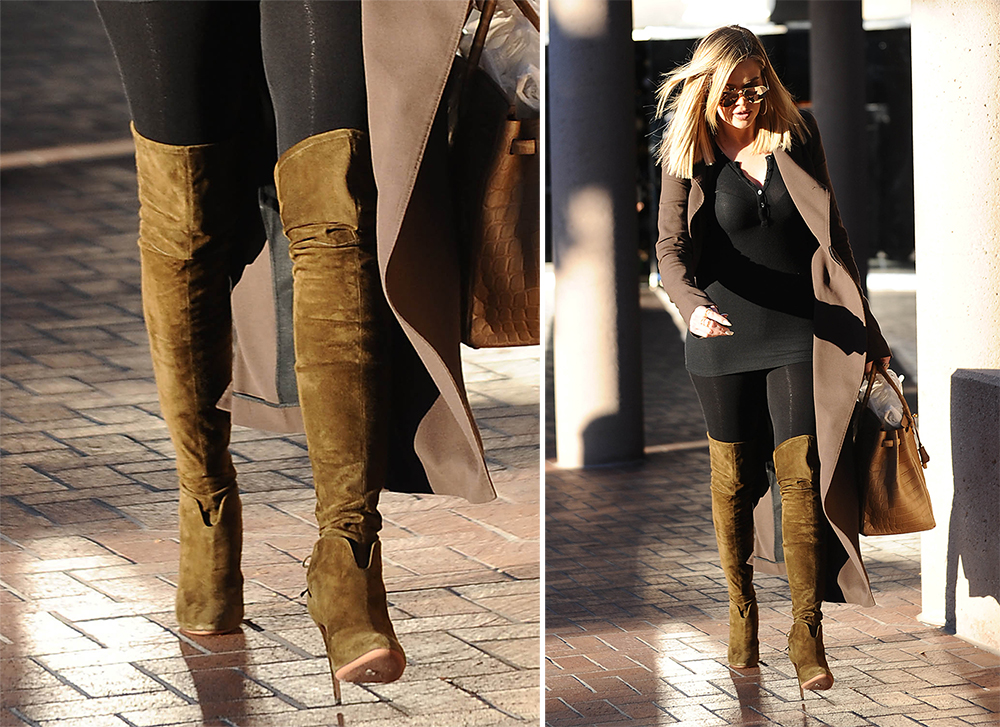 Ankle boots have never seemed less relevant than they do this week. High-heeled over-the-knee and even thigh-high boots were both extremely popular picks for Kardashians prowling around LA and UK celebs hitting the red carpet at the British Fashion Awards in London. And while boots seem like an obvious choice for winter, the majority of boot-clad celebs were based in Southern California, of course, and one might not have been even wearing pants. That’s Christmas in LA for you. 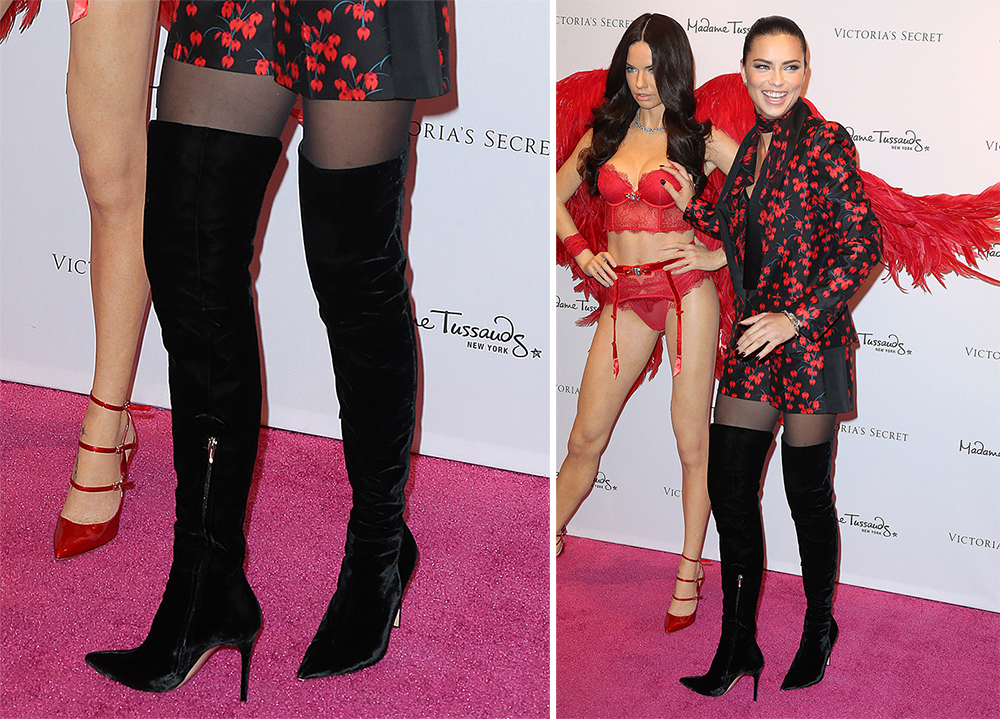 Alessandra Ambrosio recently swung by the set of Extra! in LA to rev up the crowd in a black and gold patent leather pair of Giuseppe Zanotti sandals, paired with a skirt and bralette combo from Fausto Puglisi’s Resort 2016 runway collection. What else would one wear in December? 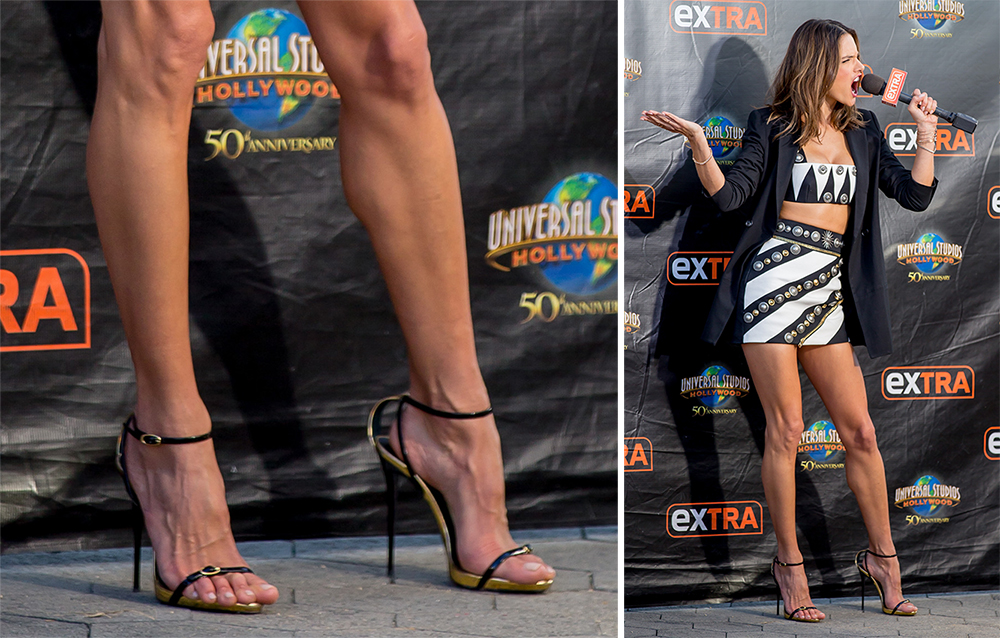 Here’s British recording artist and TV personality Cheryl Fernandez, walking the red carpet at the British Fashion Awards in an intricately embroidered pair of black thigh-high Sergio Rossi boots. Her gown is a custom design from Topshop, of all places. 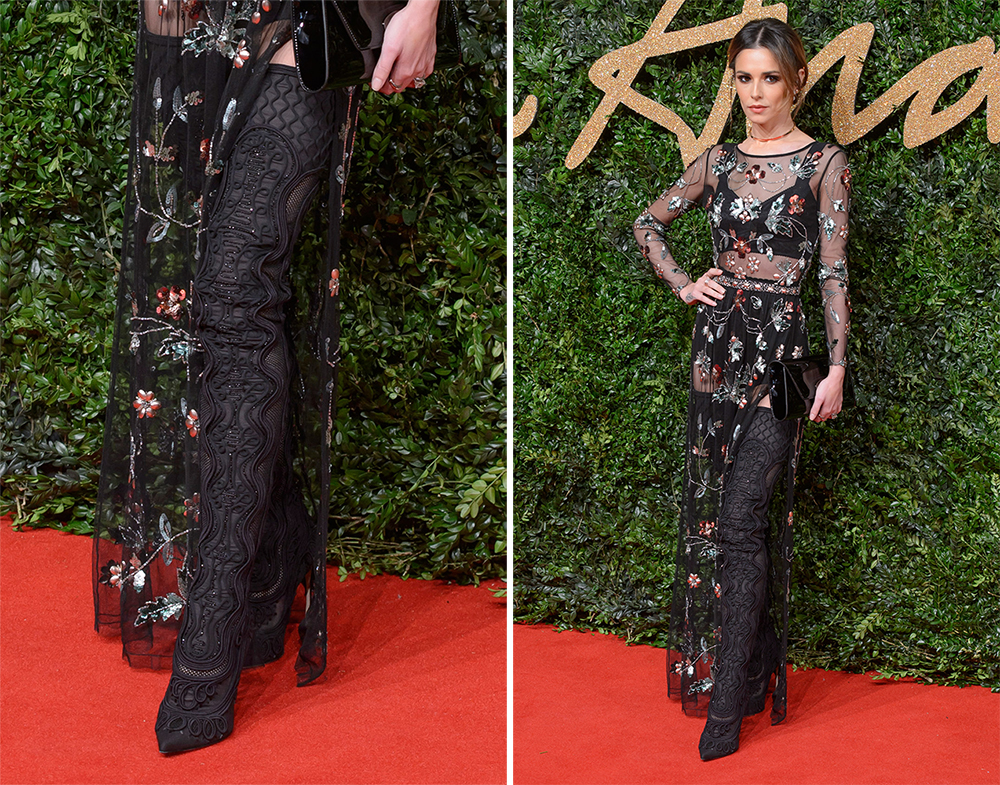 Emmy Rossum recently hosted Godiva’s “Hot Chocolate for a Cause” launch in NYC while wearing a festive pair of red suede Louboutins. From now until December 15th, Godiva will donate a dollar of every hot chocolate beverage sold in their shops to Toys for Tots. Next time you feel another mid-mall holiday shopping breakdown coming on, just take a breather and indulge in a hot chocolate at Godiva. It’s for a good cause. 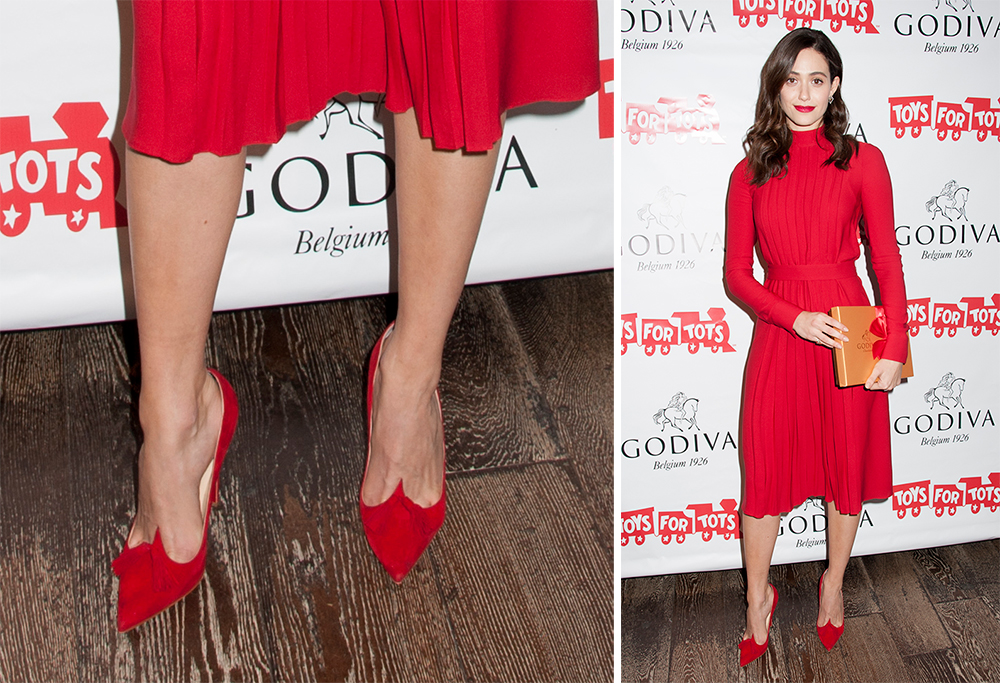 I feel I’m in danger of twisting my ankle just by looking at Khloé Kardashian’s stiletto-heeled Aquazzura Giselle Suede Boots. Khloé recently wore these boots while visiting her lawyer’s office in LA. We can only assume this exchange was filmed for KUWTK posterity.

Meanwhile, Khloé’s sister Kourtney Kardashian was spotted doing a little shopping at Saint Laurent in Beverly Hills and wearing a much more supportive pair of black suede Stuart Weitzman Highland Boots. She’s also carrying one of our favorite bags, the Givenchy Pandora Mini Bag, which you can find in both red and black for $1,790 at Saks. 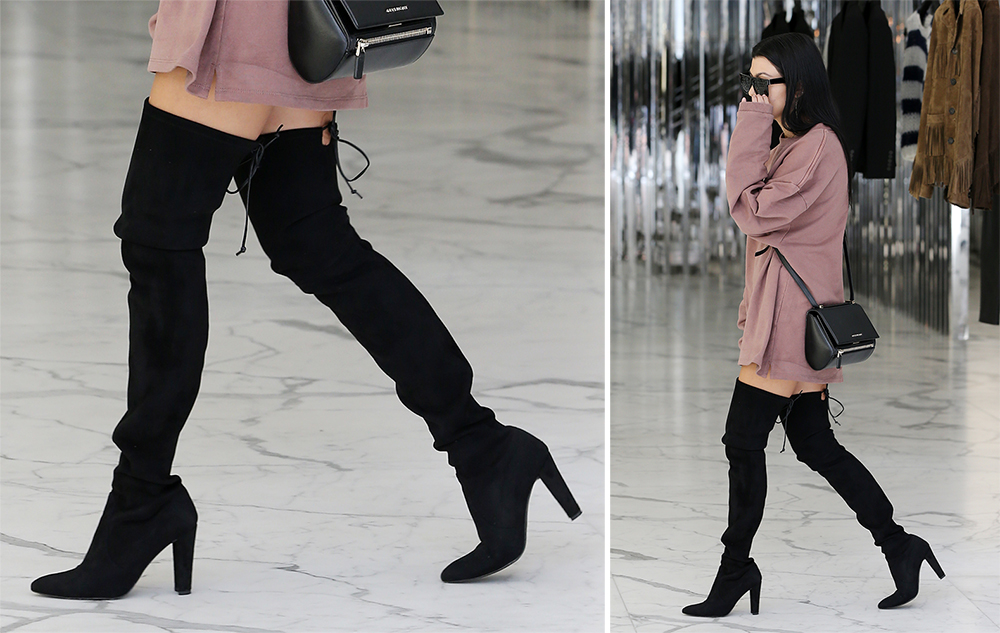 And here’s sister Kylie Jenner leaving the West Hollywood launch of her highly coveted lip kits, which took place at Dash, of course. (Where else would it be?) She’s wearing a cream-colored pair of cut-out Christian Louboutin Salonu Pumps. 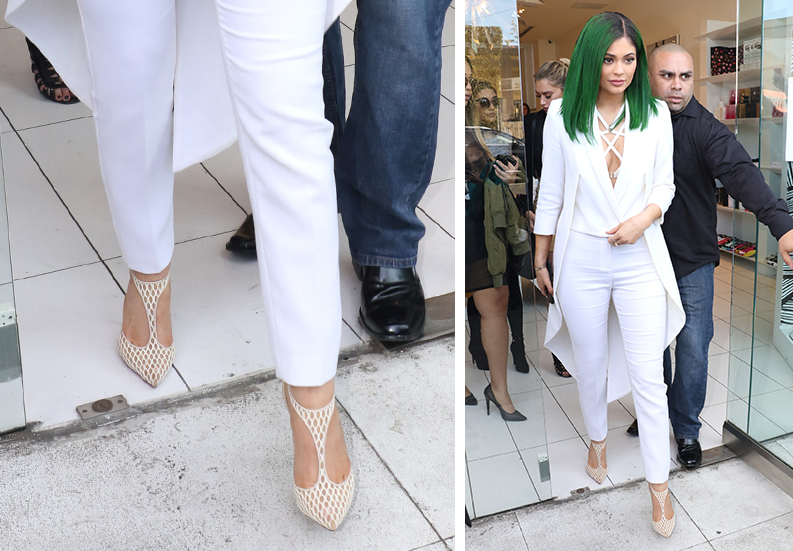 Finally, here’s Miley Cyrus, just Mileying it up as she arrives for her performance at Carnegie Hall. YRU is a rather obscure label that specializes in otherworldly shoes and apparel. 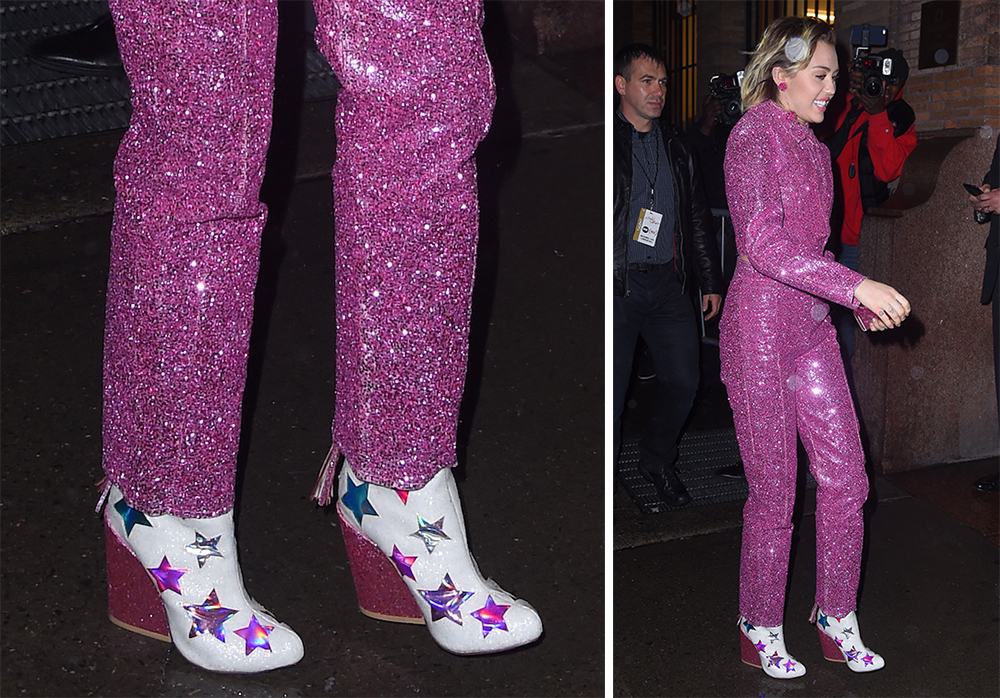 She apparently cannot be stopped, which is too bad.

is it me or do Kourtney’s boots look way too big for her?

Was talkshoes not getting any traffic? lol

TalkShoes was doing fine! Just seemed counterproductive to us to make readers hop around to different websites when we have the capacity to have everything more easily accessible.

i Go to iluxshop.es and i found a lot of replica UGG snow boots,they

are looks very fashion and very beautiful,the cheapest is only $25

Damn Khloe (or her stylist) knows how to pull a look together!!! That outfit!

I have generated 74,000 dollars so
far this year working online and I am a full time student. I am attached with
an online business entity that I heard about and I have earned such great cash.
It is really user friendly and I feel myself lucky to have that option. Why not
try this. ? ? ? ?

Ooooh I saw the Sergio Rossi’s on skye.pm that new fashon calendar. Loved them!

I agree. Where I live if I was walking around in those during daylight hours, people would think I was on a walk of shame.