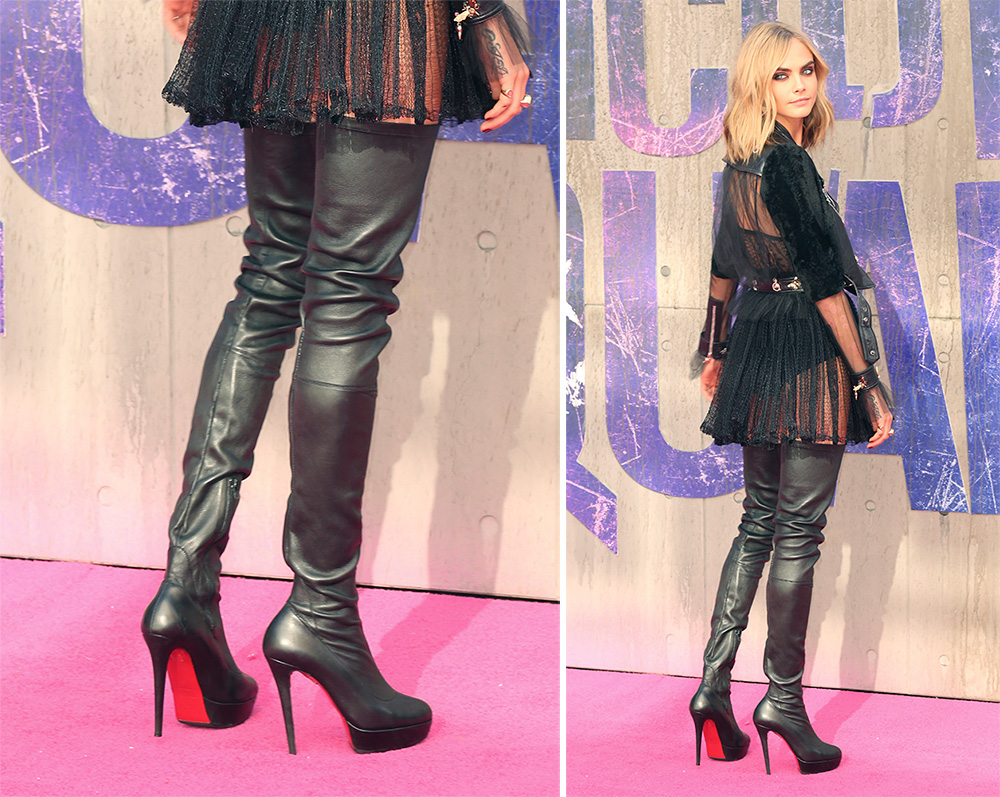 Lest we forget, there are other actresses in Suicide Squad besides Margot Robbie, including retired supermodel Cara Delevingne. And while Margot is all florals and Gucci for this press tour, Cara is naturally taking things in a slightly different direction: she’s packed all of her best mesh tops and thigh-high Louboutins. There are some quintessential Cara Delevingne looks in here, and we’ll be damned if we don’t give her press appearance shoe picks the fame and the glory they so rightfully deserve.

First we’ll start off with these black suede Alexandre Vauthier Lace-up Sandals. Her jumpsuit is also by Alexandre Vauthier. We don’t see a ton of this popular French designer’s shoes on celeb feet yet, but that could change very soon. 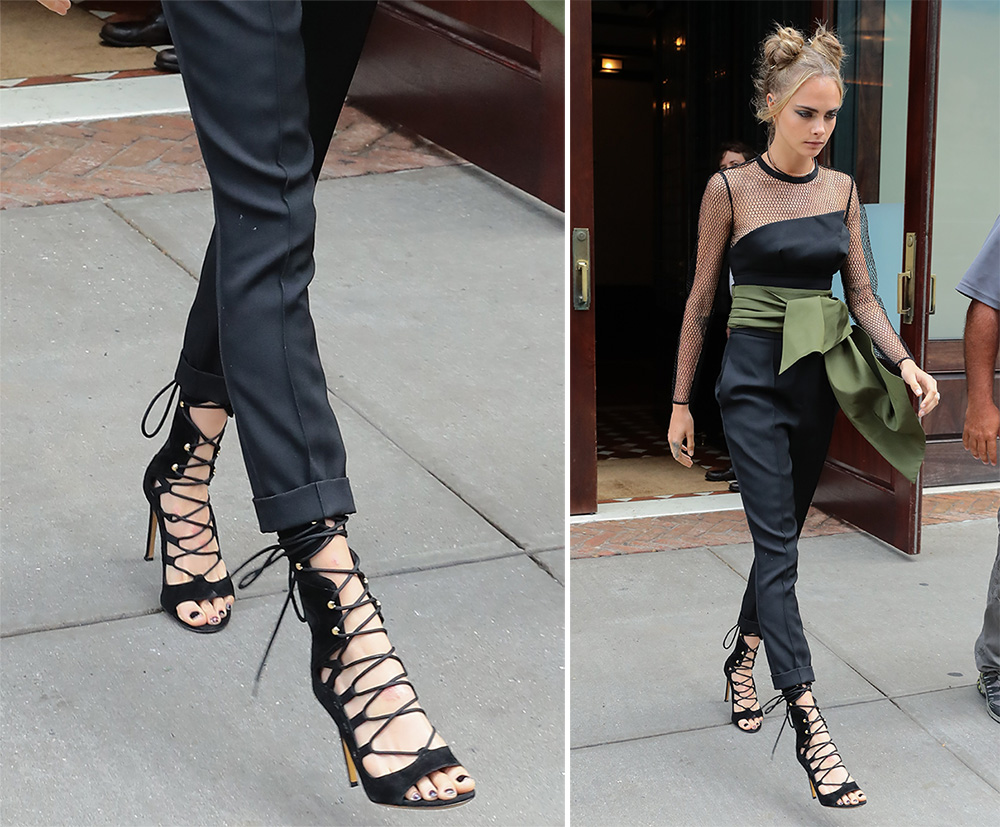 And because these aren’t the kind of boots you can just wear once on any given press tour, she wore them again on the press circuit in NYC. Her Emanuel Ungaro shirt and top are a little more Mod Squad than Suicide Squad, but I love this look. 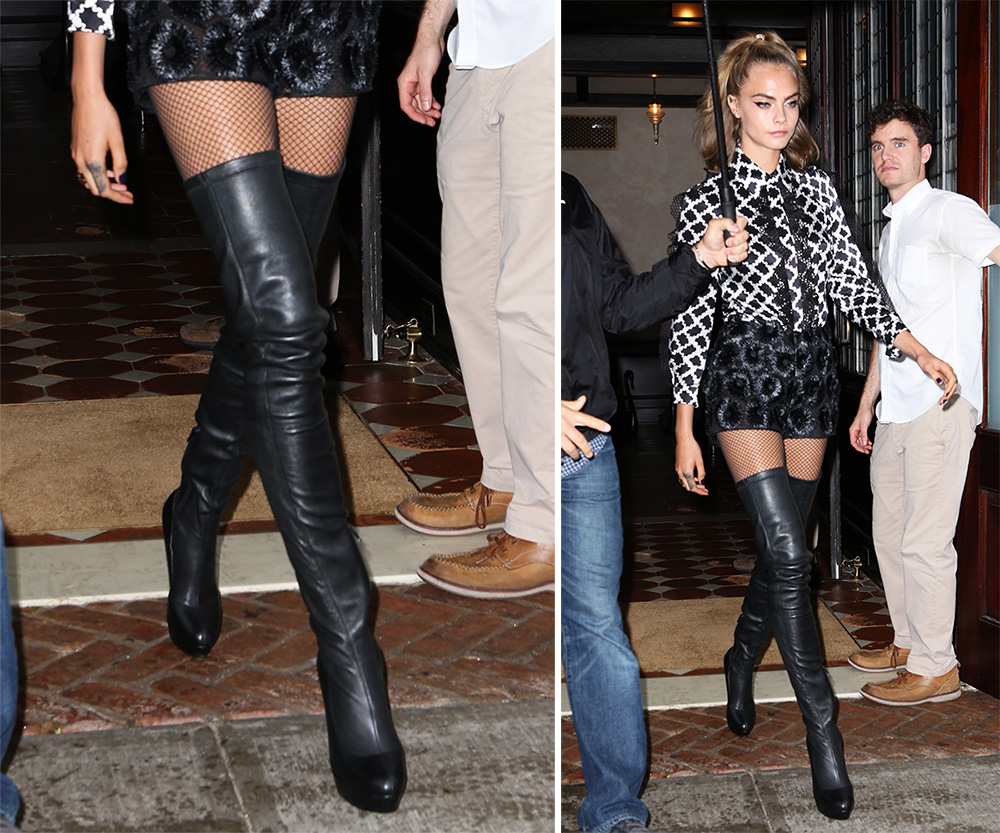 Cara switched to grey suede Louboutin Louis XI boots for this occasion. Her outfit is by Zuhair Murad. You’ll notice Cara’s press tour looks frequently feature leather and lace. Get used to the door of Cara’s hotel, BTW, because you’ll be seeing a lot of it moving forward. 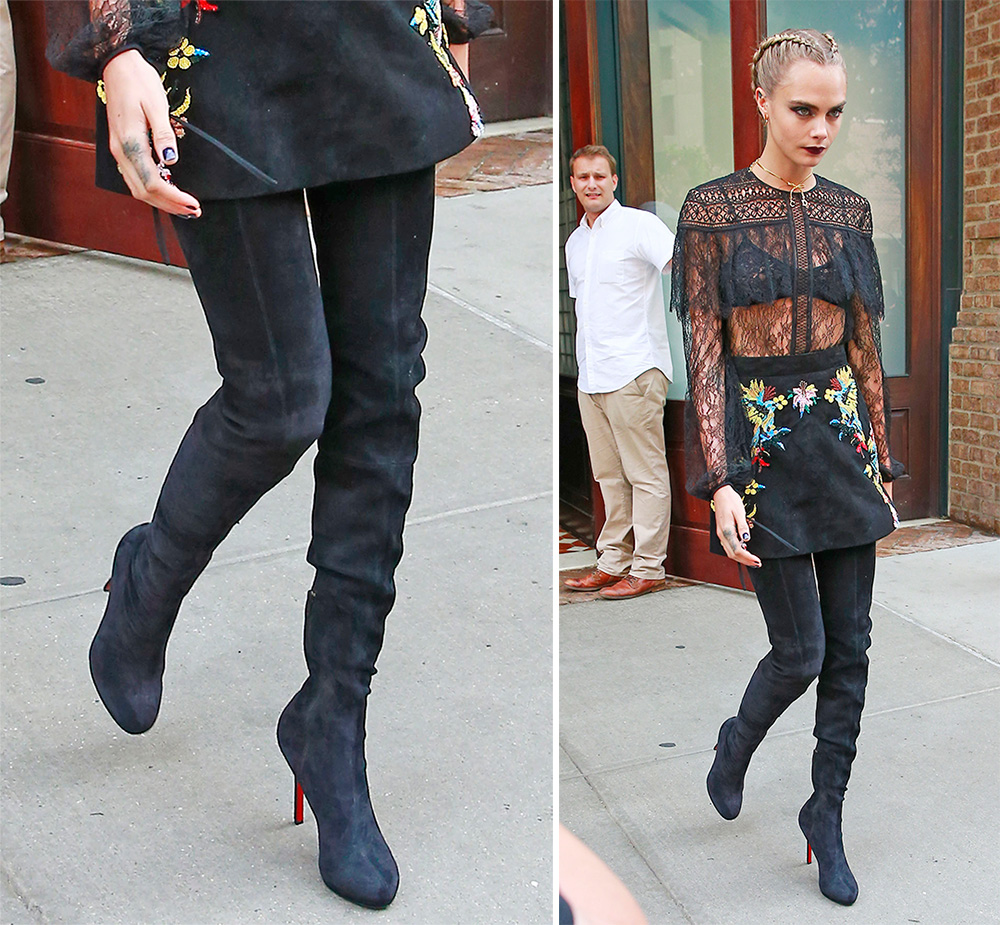 Is this dress hot off the runway, or is it just a bunch of silk scarves fastened together with safety pins? I’ll let you be the judge. Also, there’s those suede Louboutin thigh-highs again! 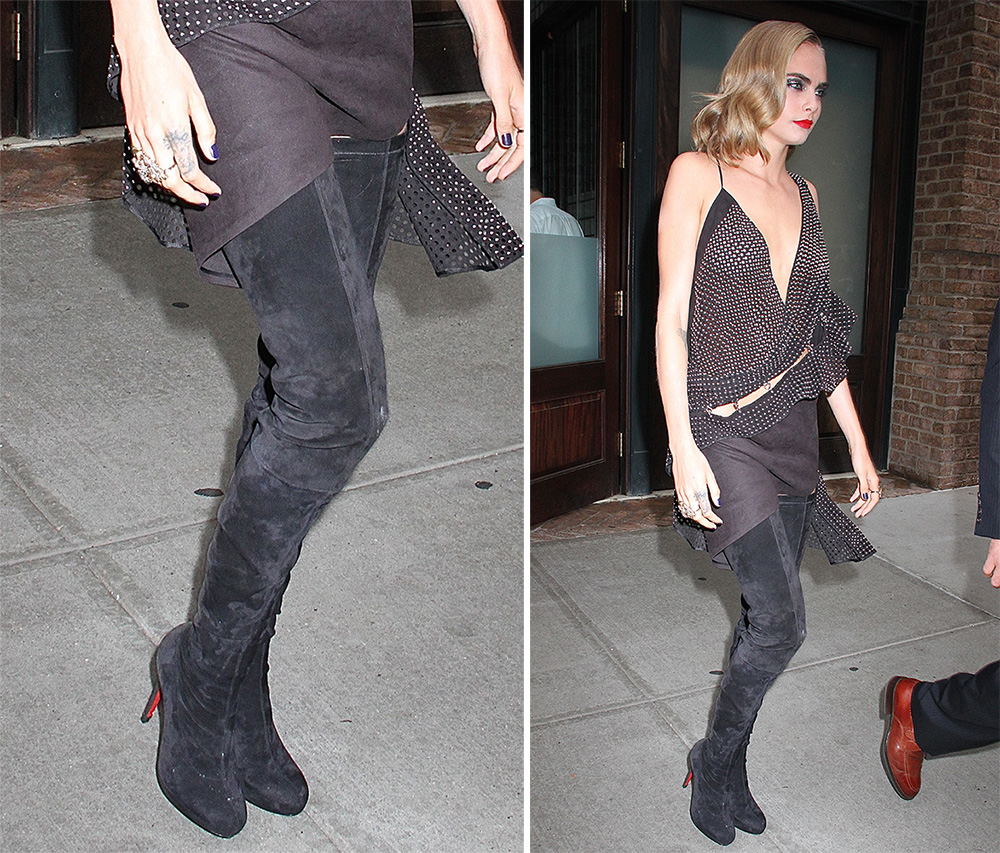 Here she is mixing it up at another press appearance in NYC with a gorgeous pair of Christian Louboutin Stud-Trim Oxfords. 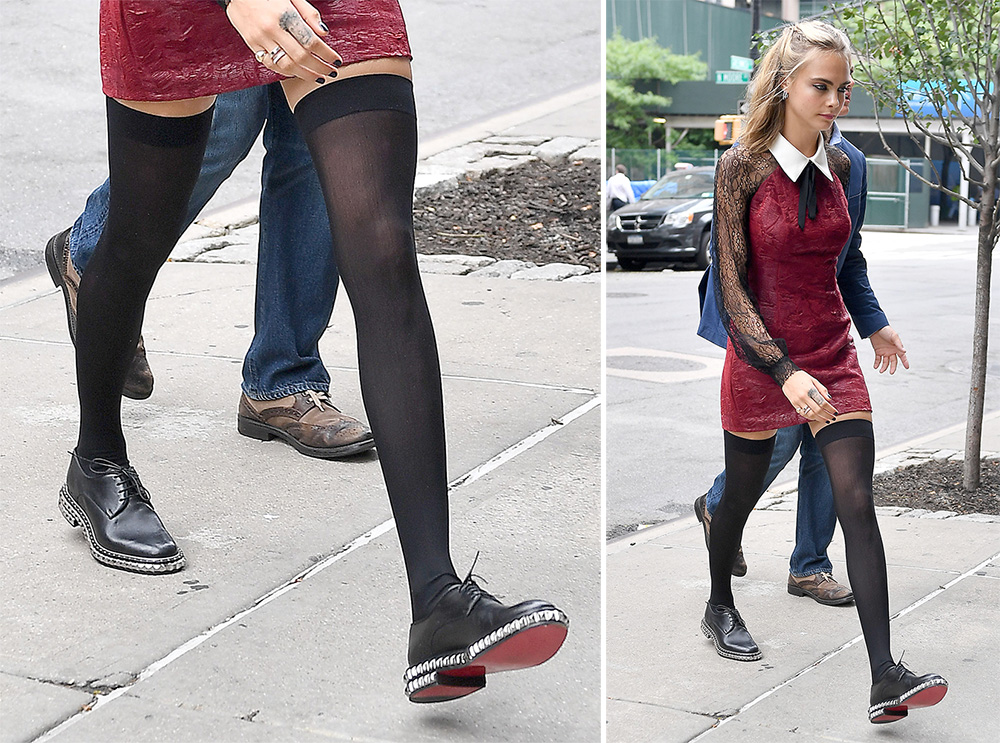 Paps spotted Cara wearing FENTY x Puma Creepers during a brief respite between promo spots. Cara is the second celeb I have seen wearing something from this collab this week, and the other was Rihanna. Adjust your shopping budget accordingly. 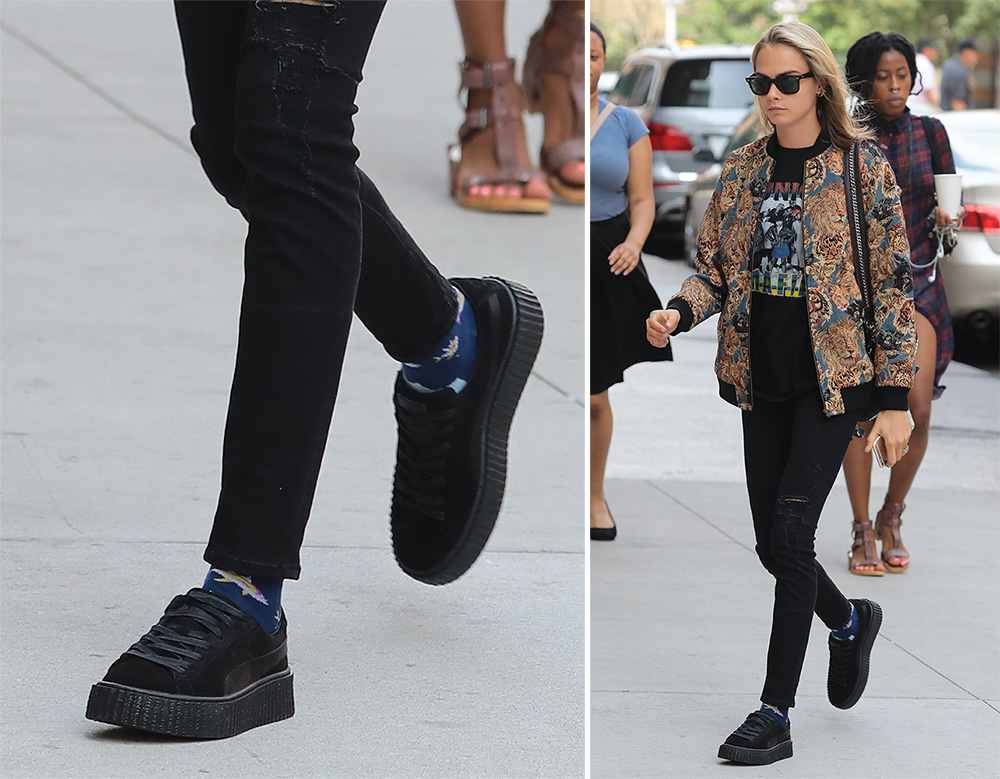 Finally, here’s Cara back where everything started: LAX. She’s of course en route to NY to start the tour, and she’s chosen a comfy pair of classic Puma sneaks for her travel needs. 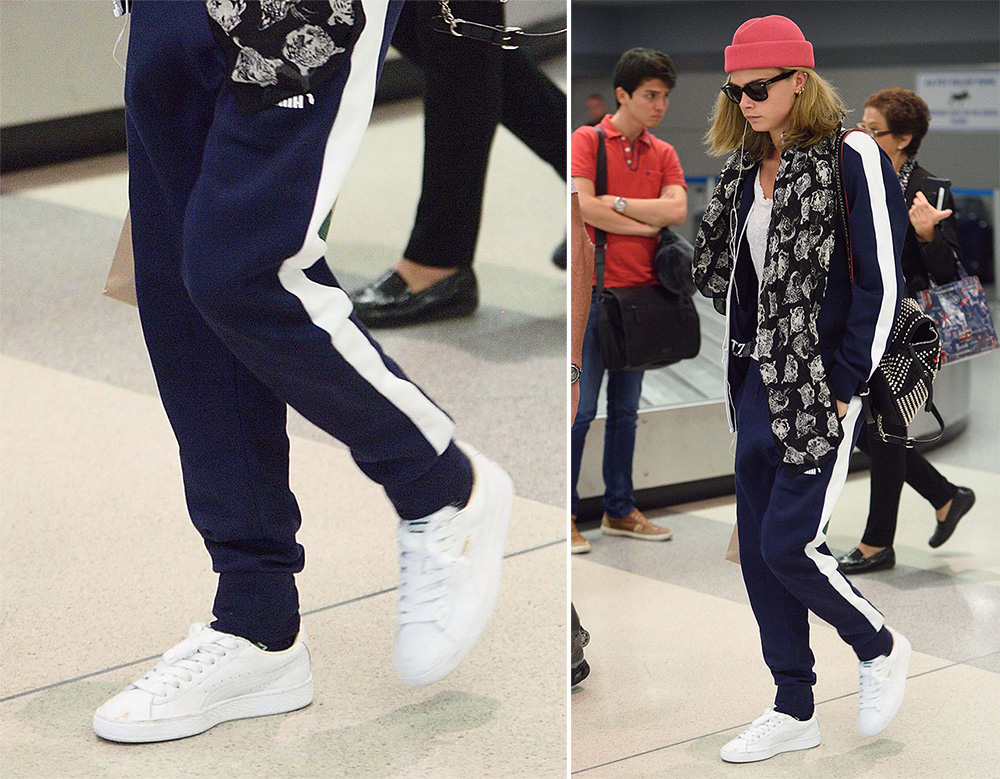 She wears loud clothes with such personality and ease. She looks amazing, like herself … but somehow I also see
Victoria Beckham?

I don’t like any of these outfits… I just don’t think I get her style.

I never understood before why she’s a supermodel, but looking at these picture I can now see what the others see. These looks seems hard to pull but she carry it with confidence. She really dress up nicely.

Why thigh-high boots at the height of summer? It’s hot (literally).

0
Reply
Sofie B
Reply to  Kate

Because that is how cool she is 🙂