Whether you love Demna Gvasalia’s designs for Balenciaga or you hate them, there’s no denying that the designer has been incredibly influential during his 5 years at Balenciaga. The designer helped kickstart the logo-mania trend of the late 2010’s catapulting big branding back to the top of shoppers’ radar with his Everyday line, which is a collection of simple silhouettes and shapes all plastered with BALENCIAGA in contrast lettering. Gvaslia’s bags are wearable and often kitschy in an ironic, but appreciated way, becoming a beloved choice for Millennial and Gen Z shoppers.

Because of Balenciaga’s ability to tap into this often misunderstood market with incredible spending power, Gvasalia has been able to experiment with new shapes and outlandish designs, and now well into his tenure at the brand, it seems the designer has found his groove. The last few seasons we’ve seen a greater move away from an entirely logo heavy collection with the release of the Ghost Bag and the Neo Classic Bag. Now, we’re getting look at the latest to come from the brand in a newly-released Pre-Fall 2021 lookbook.

Featuring a slew of bags, the images are set around the world via some photoshopping, and the collection is important because as a whole it makes a statement. RTW bears references to Gay Pride, which is a very personal touch to the collection. Gvaslia told Vogue Runway “I’m gay. I grew up in a society where I couldn’t have worn that, and there are places in the world that you cannot today. It’s important to push through against homophobia. I’m not someone who goes out in the street and shouts. But this is the political fashion activism I can do.”

The RTW collection is also noteworthy in that it is entirely sustainable, which the designer himself pushed for when creating this collection, believing that a brand as influential as Balenciaga has the power to create a greater change throughout the industry as a whole. As for the bags, the Neo Classic is featured throughout alongside new and noteworthy designs reminiscent of Balenciaga’s past. Big moto hardware is seen throughout alongside plaid shoppers evocative of the designer’s early days at the brand. A softer, more relaxed version of the Balenciaga Hourglass bag is seen in this collection as well and the bag’s recent appearance on the Gucci runway proves the Hourglass is here to stay. View more from the collection below. 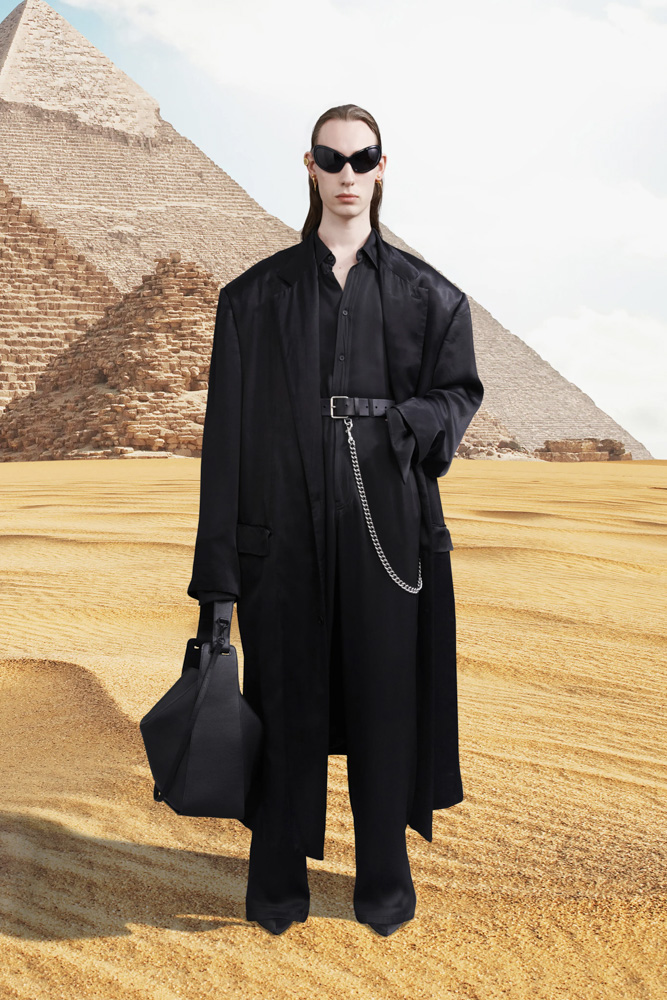 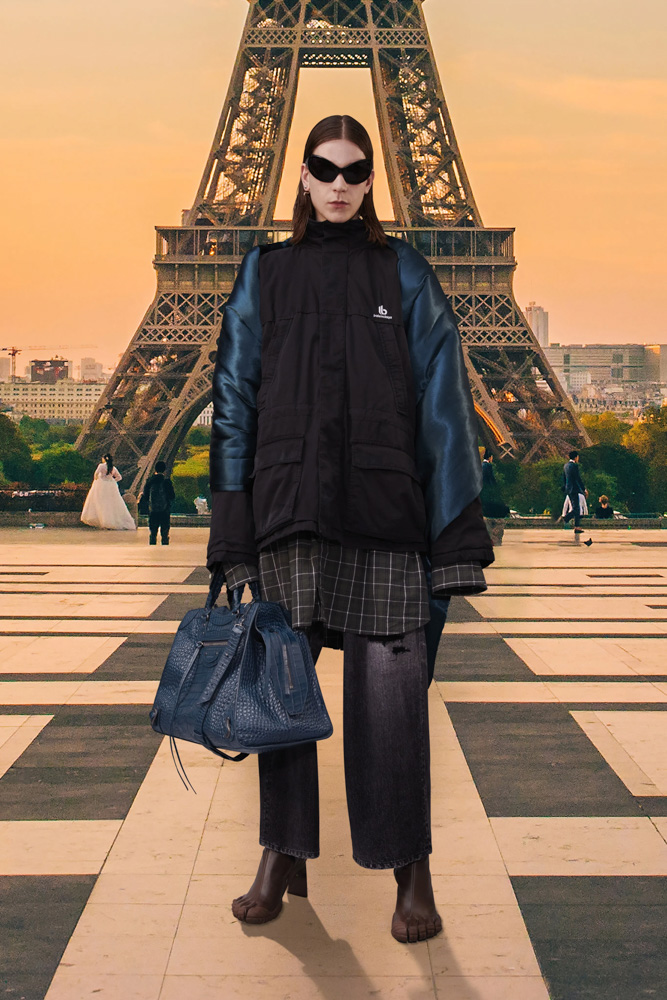 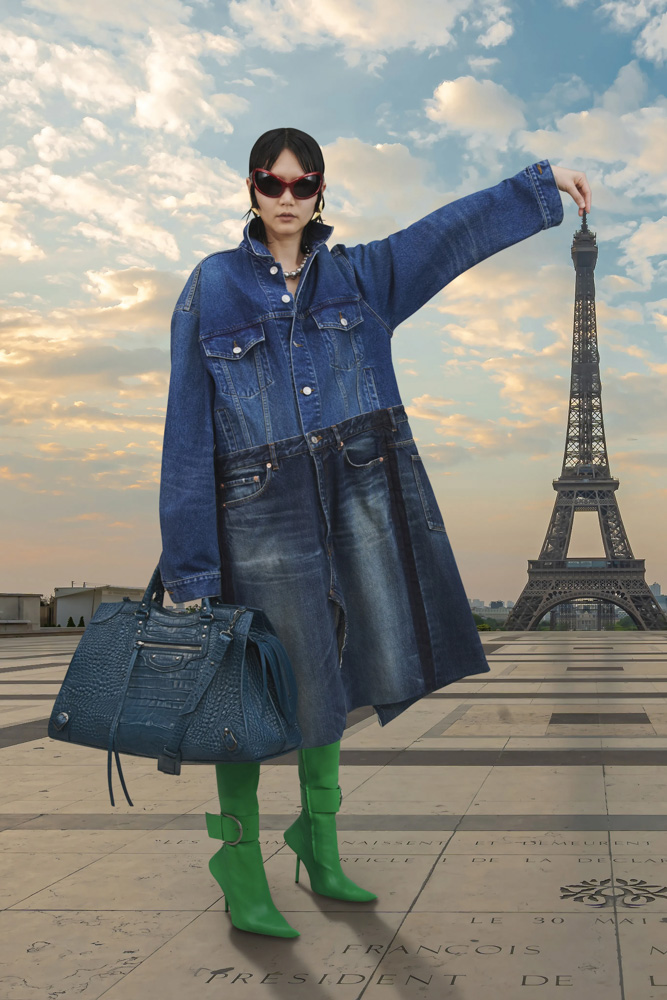 I really enjoyed the pictures and the styling. Glad to see the logo frenzy is out of this collection.

The 1 foot clutch is ridiculous, but it looks like they brought back some of their older styles back with updates. But overall a good collection.

I wanna use it to carry my keyboard everywhere.

I just want to laugh at fashion these days. We’ve seen all, haven’t we?

Funny how they can go from completely dead hideous bags to amazingly perfect bags in one sweep lol the croc embossed weekender bags are to die for!

Well, I guess my money is safe for now. The bags are way too big for my liking, and I don’t like oversized clothing.

I wouldn’t be mad if they brought back SOME of Ghesquieres designs with updates since that’s what every other house is doing now, however I’m upset with the “Gay Pride Balenciaga”. Pandering is dumb. Capitalizing on that is dumb. Many brands do it especially during Pride. If you’re gonna support the community, do it year round, not use it to be trendy.

Loving A LOT of the fashion. Is that a leather jacket in #20? Love it. Finally a great look book!
For bags, I want that gold one. Its fab!

The fashions wouldn’t work on me. But I love the extra extra hardware on the updated motos and I’ll fight you for a gold one!

The green shoes in #15 are beyond hideous!

I guess they photoshopped the global backgrounds rather than taking the photos on site. (Paris appears to be in two completely different seasons in photos 19 and 20 — look at the trees). Ah well, pandemic life. Although none of the bags or clothes appeal to me, it’s a cute concept, especially as the acronyms for round-the-world and ready-to-wear are the same (RTW)

0
Reply
Dior
The Dior Book Tote Size Guide
Polène
The Sculptural, Draped Polène Neuf
Saint Laurent
The Saint Laurent Icare Shopping Bag Makes a Case for Big Bags
Shopping through our links may earn us a small commission.
Thank you for your support