Reed Krakoff: High style for under a grand 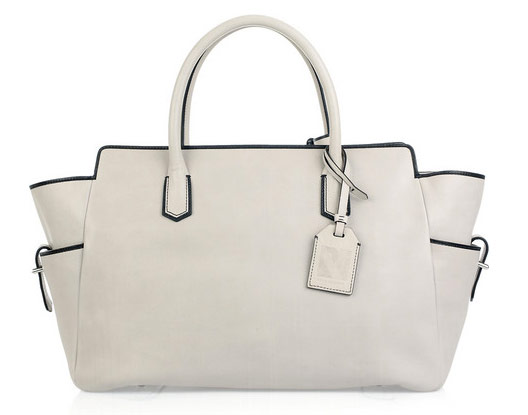 As I say often (and in fact, as I said yesterday), basic bags are a design challenge that we often ignore, but we shouldn’t. The problem is that even women who want a more traditional bag don’t want to think of their choices as “basic,” so taking a simple shape and elevating it to the next level becomes something that almost any designer has to be able to do in order to satisfy his or her customers. And with such a glutted handbag market, doing that while simultaneously standing out in the crowd is difficult. There are plenty of mediocre bags out there to prove it.

The Reed Krakoff 510 Leather Tote, however, is one of the pieces that succeeds. That it pulls off a very Valextra look while maintaining a three-digit price tag is even more impressive; I can’t help but think this would be at least a $1300 from almost any other brand.

In a design this simple, the lines have to be pristine, and adding the black piping around the edges not only gives the bag some visual contrast, but it also emphasizes how sharp the construction is. A tote this simple lays all of its secrets bare, and if it weren’t well-made or carefully planned, we’d all know it. That the lightest of dove grey leathers doesn’t betray anything negative is the only proof you need that this bag’s a winner at almost any price point, but particularly this one. Buy through Net-a-Porter for $890.