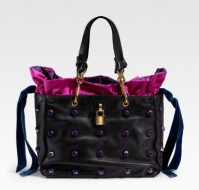 God bless Marc Jacobs and all of the fantastically odd handbag-shaped items that come out of his weird, wonderful head.

I wouldn’t carry the Marc Jacobs Vortex Small Tote even if it was free, but I think it’s great that someone designed and made it. I’ve said it before and I’ll say it again: sometimes crazy stuff has to be made before a designer hits just the right now. This is not the right note – it’s the crazy stuff before it. 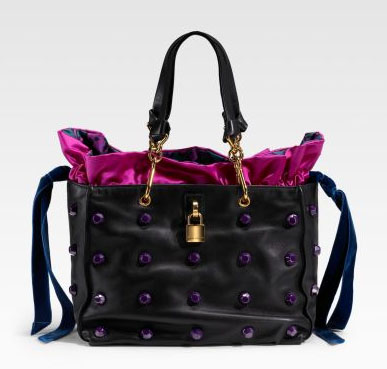 Nothing ventured, nothing gained, and this bag ventures a lot. In fact, it kind of looks like a really gussied-up gift bag. You know, the ones that take the place of wrapping paper for lazy people or those that give oddly shaped gifts. Except, of course, that’s it’s made of leather and (inexplicably) is covered with purple studs. Also, instead of tissue paper, there’s hot pink satin peaking out the top. Add in the blue velvet ribbons at the sides, and you’ve got yourself one heck of a confused handbag with no obvious focus. And that’s fantastic – I’d rather see a designer take a million weird chances than turn out the same safe bag for decades on end. Buy through Saks for $1450.