“Is that the new red Hervé Chapelier bag?” a classmate yelled across the room of my 8th-grade social studies class before our teacher quickly shushed them to silence.

The Era of the It-Bag

It was the early 2000s. Gone were the days of Jansport backpacks or toting your books in a nondescript carryall that was purely functional. By middle school, my classmates and I had forgone any semblance of practicality for what was fashionable and what was it. From Prada’s Nylon Backpack and Louis Vuitton’s Pochette Accessories to all Coach everything, the late 90s and early 2000s were the founding years of the It-Bag. And while so many of the beloved bags from the early aughts have come back from the depths of the fashion archives, there’s one bag that had its moment way back when that I almost forgot about, until today.

Hervé Chapelier himself was born in France and shuffled between the United States and Bordeaux during his formative years. After landing in Saint Tropez, Chapelier began to sell his first bags. Designed for the jet-setter, the initial designs were a reinterpretation of the classic duffle, given a fun makeover with bold, eye-catching colors like pink, yellow, orange, and purple. As his business boomed, a move to Paris was necessary, and it was then in the 1980s that Hervé Chapelier was on its way to becoming a household name, launching backpacks and later the Nylon Cabas in 1985. 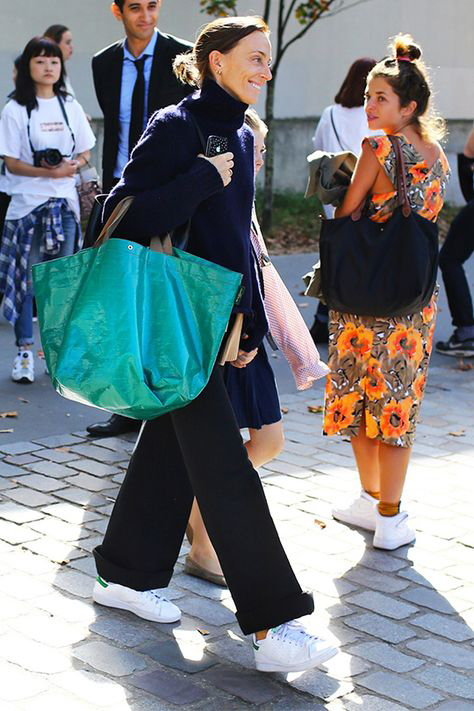 By the mid to late 1990s, Hervé Chapelier’s signature two-colored tote had become the It-Item in high schools and on college campuses around the globe. Several million bags were sold in Europe, Asia, and the United States. Even Vogue reported on the ubiquitousness of Hervé Chapelier’s bags in its November 1995 issue, stating that it “carries as much weight as Louis Vuitton’s logo-laden version”.

I remember this bag and its popularity amongst my peers with fondness, though I never did get one back in the day, despite an intense yearning for one. Hervé Chapelier, which was originally founded in 1976, is still selling its bags today, online and in boutiques around Europe.

Is it supposed to look like an Ikea bag?

Note to self: buy an IKEA bag when I need a tote bag.

It was an intense debate between this and Longchamp at the time, hahah (I went with Longchamp).

So true! (I bought both back then)

ab fab for anyone who remembers the first season. lol

Yup! 901n red and pink, I hunted that one down and bought it because of AbFab!

I just saw an Herve Chapelier store in Honolulu on Oahu! I didn’t know there was a store in the states!

I still have mine! I love this workhorse tote so much, even still!