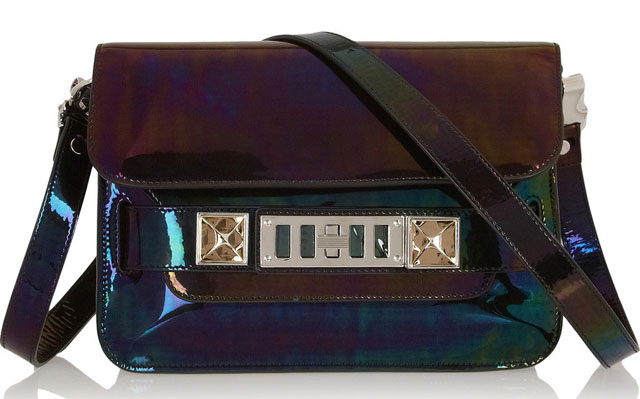 If you thought that holographic and other color-shifting leather treatments would be an early-2013 flash in the pan, think again. The trend, which got going in earnest for Resort 2013 (so, in mid-2012, when those collections were first shown to the public), is back for Fall 2013, often in the form of dark, oil-slicked patent leather. The Proenza Schouler Mini PS11 Holographic Shoulder Bag, one of the most visible light silver holo bags of early 2013, is also back.

The original Proenza holo bag was my favorite of all the holo bags, not to mention the one that I most seriously considered adding to my own collection, so this new version has piqued my interest. If you like a color-shifting effects but don’t want something that will look quite so faddish as a bright silver bag that flashes orange and green. This effect is more subtle, and it might be best described as multichrome or iridescent instead of holographic. The look is still incredibly modern, though, so if you’re into jewel tones instead of metallic brights, this might be the version of the holo trend for you. $1,990 via Net-a-Porter.

I like this a lot better than the silvers in terms of my personal style. I still don’t know that the trend is for me, at least on a bag scale, but its nice.

Love it. It’s a different color from every angle– can’t wait to see them in person!

it is splendid. there is also a lot of nice cross body bags here acewholesalehandbags dot com